The Chicago International Film Festival's After Dark programming is not the only place to find different shades of black within storytelling that wants to shake up the audience. Two films in particular offer a different look at people on the brink of death, albeit with contrasting attitudes. Marcin Koszałka's "The Red Spider" and Alex van Warmerdam's "Schneider vs. Bax" are both meticulous dances with the macabre, each about two men's close bond with murder.

Programmed in the New Directors Competition of the fest, "The Red Spider" tells a story that would likely catch David Fincher's eye should an American remake ever come across his desk. A young man named Karol (Filip Plawiak) is one of the world's greatest divers, but his mind is not focused entirely on the sport. When attending the local carnival one night, he sees the dead body of a young boy in the woods, and walks away. The murder is rumored to be another act by the local serial killer The Red Spider, a calculated, unpredictable cloud over paranoid 1960s Krakow who has been eluding authorities for a while. We learn soon that Karol has been fascinated with the Red Spider's different atrocities, secretly collecting clippings in a scrapbook.

Soon enough, Karol realizes that his veterinarian, known simply as The Vet (played by Adam Woronowicz), might be the killer. Instead of trying to stop him, Karol's obsession is inflamed by the close access he has to the Red Spider, leading both of them down a sinister path, especially as the ones closest to Karol are put in danger.

As creepy as his leads are, co-writer/director/cinematographer Marcin Koszałka is the main star, displaying a very promising eye and ear for chilling atmosphere in this directorial debut. His camera boasts many disorienting angles, which keep the film unpredictable in its grave beauty—I loved the way a slow overhead shot passing over a savage cliffside slowly revealed a carnival behind it, a contrast of death and life. In a work equally stark and polished, the colors are finely muted, and the recreation of Krakow in the early 1960's is a full aesthetic experience, from the rickety bustling of buses, to the buzzing overhead, to the crunching of a hammer as it crunches into a skull again and again. You don't have to squint too hard to see some Fincher elements in this story, but that level of aspiration often puts "The Red Spider" in a very sharp headspace. 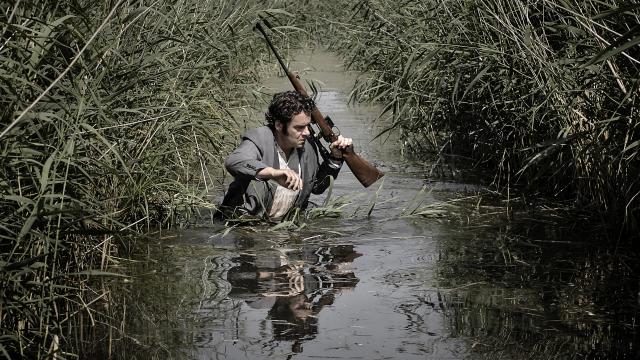 The latest from "Borgman" writer/director Alex van Warmerdam is certainly a playful one, involving an assassin's game of cat-and-mouse with a lot of extra characters. Off the top of my head, "Schneider vs. Bax" has a "Burn After Reading" vibe with a much more morose tone. Still, there's some strong comedy to be taken from this dark entry in CIFF's Main Competition.

Tom Dewispelaere plays Schneider, a husband and father, who has the secret day job of being a hit man. He's called by his boss Mertens (Gene Bervoets) to take out a guy named Bax (van Warmerdam) living alone in a nice house on a swamp, who is said to be a drug addict and a child killer. As Schneider leaves his family behind on his birthday for a routine operation, Bax has his own family connections as well when his daughter Francisca (Maria Kraakman) comes to visit. Unknown to Schneider is that Bax is pretty good with a sniper rifle too, and they even have the same boss. The film follows the two men on this fateful, extremely quirky day as unexpected conditions (and people) get in their crosshairs, while the mission of survival provides a morbid through-line.

"Schneider vs. Bax" is a fairly tasty platter of snafus, from wet phones to wrong texts and unexpected guests, all going down around one sharply filmed house (you can practically blueprint it by the end). But regardless of how these different game pieces are moved around, the main game master is Warmerdam's script, which wants to play the audience more than characters. In turn, the editing is both meticulous and tedious. We are tooled around by van Warmerdam as he takes us to very specific points, only to drop one thread and follow another, the surprises more in assembly than naturally in the story.

There is some genuine comedy to come from the absurd events, but it becomes knotted up, more a sequence of events than a gripping story that holds a viewer's attention outside of some sudden moves. "Schneider vs. Bax" is an intriguing choice for the festival, especially consider van Warmerdam's sense of humor, but its nuttiness transcends itself, as the film struggles to be much more than that.