A great whooshing wind blew through the narrow streets of Cannes last night, knocking over the empty cartons piled at the curb in front of closed shops and wreaking havoc in outdoor cafes. This morning brought an impressive display of thunder and lightning over the cruise ships and yachts of the port, sometimes more sound and bravado than rain.

So it is with Ken Loach’s new film "Jimmy’s Hall," a film loosely based on the pivotal year of 1932 in the life of Irish activist Jimmy Gralton, the only native Irishman ever to be deported from Ireland as an illegal alien.  Loach considers the film a companion piece but not a sequel to "The Wind that Shakes the Barley," the film set during the Irish Revolution of 1922, for which he won the Palme d’Or in 2006. Following today’s premiere of "Jimmy’s Hall," it seems less likely that Cannes lightning will strike twice. 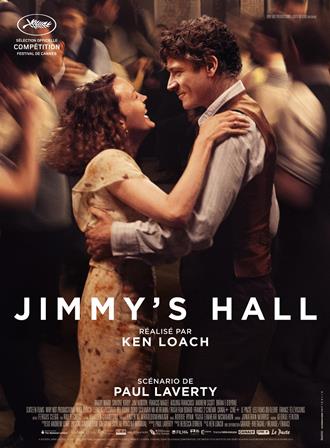 British social realist Loach ("The Angels’ Share," "Looking for Eric") has always worn his working class interests and affiliations on his sleeve. His County Leitrim characters in "Jimmy’s Hall" enthusiastically declare their politics with their feet when Jimmy Gralton (Barry Ward) returns home after ten years in New York and reopens the shuttered building that once served as this rural outpost’s homemade community center by day and dance hall by night.

The people vs. the spiritual and secular power of the Irish Catholic Church is a subject that has been addressed through many films and in many eras, most recently in the international hit "Philomena." The theme of the Church in opposition to the arts as the work of the devil got a semi-comic workout in the Martin Sheen vehicle "Stella Days."

In "Jimmy’s Hall," the clear-cut conflict is between the Church, represented by Father Sheridan (Jim Norton), the rigidly conservative parish priest, and the farmers, peat-diggers, and cottagers who comprise his flock. The priest is part of the ruling-class coalition that includes the aristocracy and the police, or "the pastors and the masters," as Gralton’s elderly mother observes.

As working class drama, "Jimmy’s Hall" lacks any shred of subtlety or complexity of political thought. Loach lays it on with a sledgehammer, intercutting scenes depicting the wholesome activities of the hall, including poetry and music classes taught by community volunteers, with one of Father Sheridan’s sermons in which he enumerates the hall’s occasions of sin, and denounces Gralton as a godless Communist. "Education is the exclusive reserve of holy mother the church," the priest thunders on another occasion.

Less integrated into the whole of the story are the frankly fun aspects of "Jimmy’s Hall." Jimmy returns to a community starving for entertainment and diversion, and brings tales of Harlem nightclubs and an exotic kind of music called jazz. He also brings a gramophone and records, and teaches dance steps that have men, women, and children swinging their hips with abandon.

Music is a pop-up presence in "Jimmy’s Hall" from the moment that Gralton first happens upon a group of young people staging a spontaneous dance to a fiddler’s tune by the side of a road. Rollicking scenes set at the hall include reels and jigs and virtuoso displays of Irish dancing followed by the Lindy Hop to a six-piece jazz band. A signature Loach-style chase by car and bicycle is accompanied by a rousing traditional tune on the soundtrack.

Jimmy’s hot longing for the woman he once left behind, now married with children, can only be expressed on the dance floor, where Ward, a handsome charismatic actor who can really dance, periodically brings the film to life.  It seems like Loach was aching to make a music film, and his lust for the lively tunes shows throughout. It’s too bad he was so wedded to the politics.