On a little Cannes side street I pass a restaurant that hires a cellist to play for hours daily in their sidewalk café. Every time I pass, she’s playing the song from "Titanic." There are days when the soundtrack from a disaster sets the mood perfectly for viewing some of the festival’s overreaching films. Today was one of those days. "The Search," by multiple Oscar-winner Michel Hazanavicius ("The Artist"), is headed for critical icebergs as far as the eye can see as it pushes off into the world from its Cannes launch.

Premiering this morning in competition, "The Search" is set in 1999, during the second Chechen war. It’s a sprawling movie that portrays the massive human tragedy of the conflict through converging stories from three angles: Hadji, a traumatized nine-year-old orphan separated from his sister and infant brother; Kolia, a Russian army recruit; and two international aid workers, played by the film’s only name stars, Berenice Bejo and Annette Bening.

Scenes from the amateur video footage a Russian soldier shoots as he walks through a ravaged and burning village aptly invoke the horror of the milieu of "The Search." "Welcome to the world’s biggest shit hole," the soldier narrates. "A place you never wanna go and never wanna see." Atrocities follow, putting homeless little Hadji on the road in search of safety.

In an intercut parallel story, the film reveals the journey to radical desensitization of Kolia, forcibly conscripted into the Russian army after a minor brush with the law. He’s subjected to abusive training and conditioning that is almost beyond the imagination in its brutality, and finally turned loose on the Chechen front where the Muslim populace is regarded by the invaders as fit only for target practice. 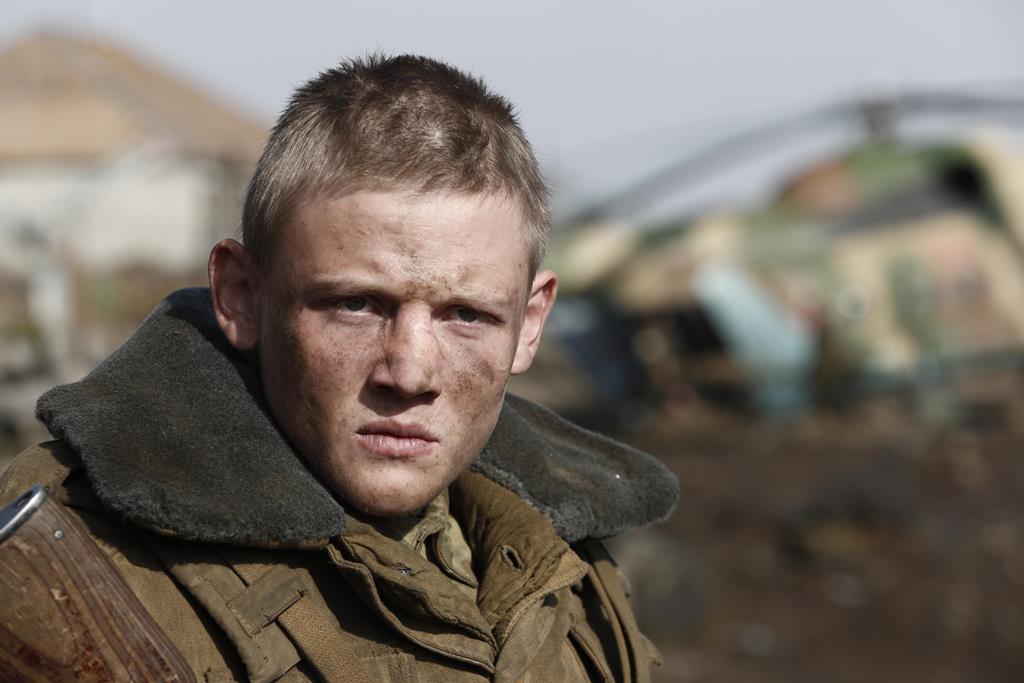 "The Artist" was widely acclaimed for Hazanavicius’s adaptation of the techniques of the silent screen. I was not among those who fell under that film’s spell, but in "The Search" I appreciate that the director has an acute sense of how to tell a story without the use of dialogue. "The Search" is at its best when it wordlessly follows its characters or picks out great patterns and small details by studying the movement of crowds and the individual faces. Much of Hadji’s and Kolia’s stories play out in this effective and occasionally moving observational manner.

Against this large-scale drama of politically-motivated horror, Hazanavicius has elected to foreground the stories of two women: Carole (Berenice Bejos), working for a European Union human rights committee, and Helen (Annette Bening), an American who operates an orphanage for Chechen refugee children.  Both are so out of sync with the other aspects of this film that they seem like characters dropped in from another planet.

For Bejos as Carole, the problem exists largely at the script level. The situations and people around her reflect the message that she is a compassionate and effective aid worker who takes in orphan Hadji out of pity. Yet the Carole we observe is constructed as an astonishingly clueless, self-centered woman with a puzzling cultural insensitivity to the plight of the psychically damaged child. When he fiercely scribbles out the image of a house and family in a drawing, she reprimands him for messing up a nice picture.

For Bening, the problem is at the level of performance. Mercifully, she has few scenes, but her loud American voice mouthing the platitudes with which the script provides her, and her stiff body language disrupt the flow of her scenes.

With all good intentions but in the blundering ineptness of the execution of this star-driven line in the narrative of "The Search," the film unintentionally puts an appallingly superficial and self-serving face on human rights work. As the film ended to a chorus of catcalls and boos competing with modest applause, I think I could see some of those critical icebergs looming.