Oh, Jean-Luc Godard, you crafty rascal, you’ve done it again! Once more you’ve been the catalyst for Cannes-mania. The festival seems to lose its head in proximity to any work by this top dog of world cinema. I don’t use the term dog loosely or without implied honor, seeing as a dog is very much the hero of Godard’s new film "Goodbye to Language," which premiered in competition today.

There are some directors whose status is such that any screening of new work will guarantee a frenzied mob. Godard is one of those directors, possibly THE director represented at Cannes this year whose film everyone and anyone wanted to see. In a go-figure move, the festival scheduled just one screening combining the press screening and the official red carpet premiere in one event. The result was predictably a kill-to-get-in sort of madhouse. A theater that holds more than 2,000 was completely full thirty minutes before the film began. They spent the intervening time guarding the doors. 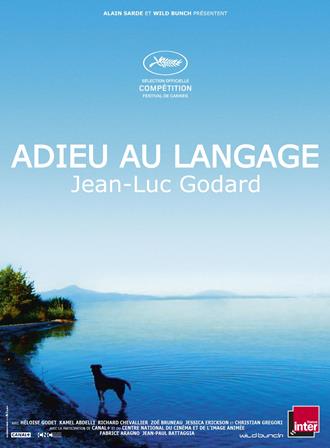 Funny thing, but Cannes pulled a similar move when Godard’s "Film Socialisme" premiered in 2010. Godard himself, who’s not here in person, would probably love the thought of the scrambling, the confusion, the administrative jumble, and the subsequent mad efforts at interpretation of this highly cryptic work by thousands of the world’s critics.

Another funny thing, but with "Goodbye to Language" I think Godard is messing with us big-time, just as he did with "Film Socialisme," and I don’t mean that in a bad way. He’s 83-years-old; he’s top dog; he’s the legendary Jean-Luc Godard, and I think he feels the boundless freedom to do and say what he wants on the screen without giving a hoot how it’s interpreted or whether it’s interpreted.

"Goodbye to Language" is in 3D, and a very challenging 3D at that. The film is structured in numbered sections that repeat themselves with different or overlapping content, and there are brain-scrambling superimpositions, texts, clips from old films, solarized images, and footage shot with low-res cameras. There’s even a costume-drama sequence depicting Mary Shelley and Lord Byron. The sense of experimentation is extravagant, and the 3D effect achieves such notable depth of field that this little movie puts mainstream mega-bucks productions like "The Great Gatsby" to shame.

Godard leads the chase through the world of ideas with a barrage of quotes by philosophers, writers, and artists including Monet. Some statements are layered over the images and a narrator voices others. Words like "democracy," "terrorism," "unemployment," "economy," and "war" are heard. Some of the images that repeat at intervals include a crowded tour boat on a body of water, an open-air book stall, a man with a cell phone and a maple tree with bright yellow leaves.

A friendly dog’s wet nose pokes toward the camera lens about the same time a naked man and woman begin to appear frequently enough that a very slender narrative is implied. The dog, rather clearly Godard’s pet, makes more and more appearances in all its moods and adventures.There’s a lot that can be read between the lines: Frankenstein/dog; man/woman; master/servant.

I suspect that Godard had a whale of a time making "Goodbye to Language."  He’s once again the cinema wizard, and his wizardry extends to putting 3-D through paces that no one else has ever tried, and putting it all together with a trickster’s magic.