Explosive is an adjective that might aptly describe some films, but it’s not a word you want to hear applied to the theater where you’re about to see a film. Friday’s biggest happening at the Cannes festival involved a bomb scare that required the evacuation of the Festival Palais.

Just as crowds in huge numbers pressed against the gates to be admitted to the already late evening press screening of “Redoubtable” by Michel Hazanavicius (Oscar-winner for “The Artist”), what first appeared to be one of the festival’s annoyingly perverse but routine delays turned into something else, and our seething mass was warned to move far back into the street by guards with a touch of panic in their faces. They brought in the army, the national guard, the fire department, and the bomb-sniffing dogs, and all was deemed safe after roughly an hour’s delay.

“Redoubtable” has been one of the competition films most anticipated by the press, and not in a good way. The idea of making a biopic of Jean-Luc Godard, that icon of the French New Wave, especially one starring Louis Garrel, is enough to give many critics chills. Thirty-something Garrel, once voted one of the 15 sexiest men in France in a magazine poll, most often plays foppish, sniveling nerds. In the rest of the world he’s generally an acquired taste.

The semi-comic but largely unfunny “Redoubtable” portrays Jean-Luc Godard circa 1968, in the period of his life in which he embraced radical politics and revolution, turned his back on his earlier work, and married 19-year-old student Anne Wiazemsky, the star of his film “La Chinoise,” who had also been the child actress in Bresson’s “Au Hasard Balthazar.” This is primarily the story of their rocky marriage.

Hazanavicius’ Godard (Garrel) is a 38-year-old abrasive jerk with an enormous chip on his shoulder. Anne (Stacy Martin) is seen as the thoughtful but adoring child bride, a quiet sylph with a great haircut and fashionable mini-skirts, who hangs on his arm as he attends political meetings and shows up in the forefront of Paris marches and demonstrations to throw rocks. His dislike of old people, his disdain for his fans, his passionate hatred of the cops, and his equally passionate desire to be seen by young student rebels as one of them, are all made manifest in nasty incidents that reveal a bottomless anger.

This is a film that has an ax to grind, and it would be easy to describe one outrageous scene after another, in which a vain, self-serving, vacuous character is hell-bent on wounding his young wife, destroying his marriage, and kicking over the traces of a successful and much-admired career in the name of revolution, but there’s no point in that. The question becomes who is self-serving here, because director Hazanavicius reveals himself, which becomes the real point of the film. At the beginning, a narrator, presumed to be Hazavanicius, describes Godard’s godlike status in the history of cinema and the influence he exerted over the speaker. At the conclusion of the film, Anne acknowledges that the Godard she married is dead to her following an unsuccessful suicide attempt in Italy, after he has humiliated and verbally abused her and accused her of infidelity. The narrator’s voice returns for the payoff. Hazavanicius declares that the Godard who once held him enthralled has died for him too, leaving him liberated to be his own artist. 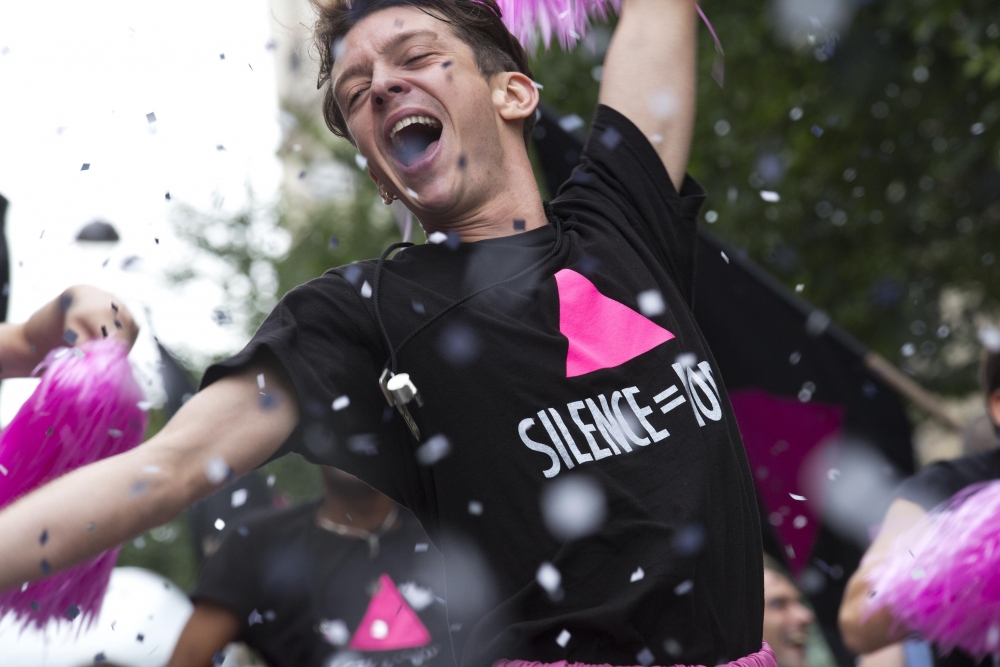 Another French activist movement and revolution that developed almost three decades later is portrayed in Robin Campillo’s competition entry “120 Beats per Minute.” Campillo (“Eastern Boys,” “They Came Back”) more frequently works as an editor and screenwriter. In 2008, he was the co-writer and editor of the Palme d’Or winner “The Class,” directed by Laurent Cantet. “120 Beats per Minute” is a detailed fictional recounting of the formation of Act Up-Paris in the early 1990s, as the AIDS crisis is decimating the gay community.

In terms of dramatic focus, the film falls into two halves, with the first hour-plus introducing the large Act Up core group, including both men and women, as well as HIV-positive and negative participants. According to the rules, anyone involved must be willing to be perceived by the press and public as positive, no matter their actual status.  The action alternates between the meeting room, where debates rage, grievances air, and friendships are made, and demonstrations that include invading the corporate offices and labs of a major pharmaceutical company to throw balloon-bombs of fake blood.

Gradually, “120 Beats per Minute” narrows its focus to the relationship between Nathan (Arnaud Valois), an HIV-negative newcomer, and Sean (Nahuel Perez-Biscayart), one of the most politically active co-founders of the group, who is already experiencing some of the early symptoms of AIDS. In telling their story the film becomes more intimate and relatable in terms of dramatic action. Personal histories, stories of lost love, regrets, and childhoods are exchanged in bed.

As Sean’s and Nathan’s relationship deepens, Sean’s condition develops into full-blown AIDS. Sean initially resists then accepts his lover in the new role of caregiver. There’s no doubt as to how the film is going to end, but Campillo crafts this extended sequence beautifully in muted light: Sean’s assisted death in the night with Nathan at his side; Sean’s mother dressing his body, gently pulling the jeans up his thin legs; and Act Up colleagues arriving one by one to the small apartment, seeking solace and coffee in the wee hours.

“120 Beats per Minute” is not an easy film to watch for multiple reasons, including its 140-minute length, a great deal of which takes place in meetings in which subjects like medical reports, research, and the production of fake blood for demonstrations are discussed at length. Yet there is an air of urgency to the length, the detail, and the meticulousness of the recreation that conveys the message that Campillo feels compelled to relay this history in all its detail to the world. 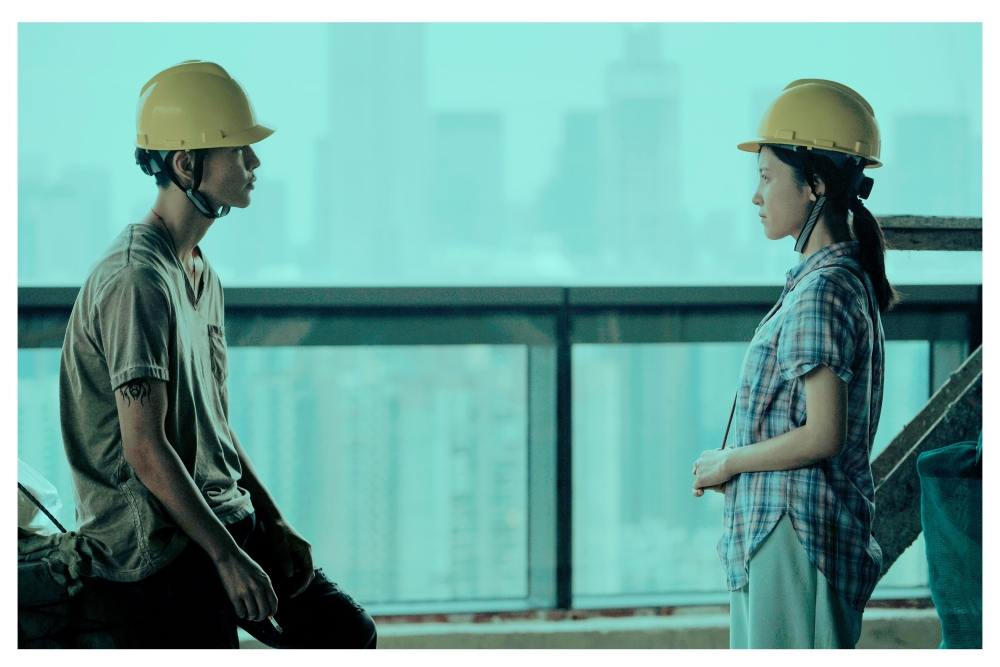 The death of dreams is the subject of the Chinese film “Walking Past the Future” by Li Ruijun, screening in the A Certain Regard sidebar. The economic ground shifts rapidly and often under Yaoting (Yang Zishan), who has a high-tech factory job in the city of Shenzhen. As the film opens, both Yaoting’s parents are laid off, and the family, which includes her younger sister, moves back to the dusty northern village her parents left a quarter-century before, only to find that life has changed radically to their disadvantage.

Back in the city, rootless and living in a factory dorm with her roommate friends, Yaoting’s lifeline becomes the anonymous WeChat relationship she develops with a man. He goes by the pseudonym Desert Ship. The landscape of Shenzhen is muted by pollution, reflecting incongruously on Yaoting’s own chosen poetic name of Misty Landscape. The pale light of the phone screen illuminates her face as obsessive message exchanges punctuate days spent scheming to earn the down payment on the apartment she hopes to buy for her parents.

Li keeps the drama on an even keel as frequent misfortune also punctuates Yaoting’s life. She and her coworkers are in the cafeteria at lunch when an announcement over the PA informs them that they are all laid off for a week without pay, effective immediately. The film is calmly, even-handedly relentless in illustrating the myriad routine ways in which Yaoting and her fun-loving girlish dorm mates are at the beck and call of an economic system in which their only function is to make money or spend money. Those who can do neither have no value.

Yaoting’s best friend links up with Fang (Xin Min), a fast-talking young hustler, who claims he has high-paying night jobs for them. The friends declare themselves in immediately and Yaoting tags along reluctantly the second time, only because the realty company is pressuring her for the apartment down payment. The job sounds like prostitution, but turns out to be signing up for risky clinical trials for drugs.

Li often composes the film frame so as to give his characters a separation in space, placing them on opposite side of a doorway or window, for instance. In the key scene in which a despairingly tipsy Yaoting, who has just had bad news about her health, discovers the true identity of her virtual friend, they face each other in a karaoke lounge with a stretch of garish wallpaper and a flat-screen TV with sound blaring in the gap between them.

In what may be Yaoting’s final trip back to her native village, accompanied by her new friend, now more a caregiver than a lover, the desolate landscape of a northern desert province fills the wide train compartment window between them. The film’s only flight of fancy is, ironically, a dream sequence.