“Okja” stars Tilda Swinton as a glib, ambitious corporate CEO, who announces her New York-based family company’s development of an “all-natural” super-pig, which she boasts will become the answer to world hunger some ten years down the line. 26 of the pilot-project piglets are to be farmed out to specially selected farmers around the world, and raised according to individual, culturally specific methods.

A decade later in Korea, grown-up pig Okja is the cherished charge of an elderly farmer and his orphaned teen granddaughter Mija (An Seo Hyun), who have raised her all these years. Okja is a lumbering, clumsy creature that looks like a cross between a hippopotamus and a hairless puppy the size of a Mack truck. She’s playful, affectionate, and inseparable from Mija, and unlike Ho’s monster in “The Host,” is harmless and benign.

Okja and Mija frolic in a mountain paradise in a symbiotic routine, and have mishaps including a hair-raising adventure that leaves Mija dangling off a cliff from a rope, with Okja at the other end. Except for the regular appearance of the f-word, Ho would seem to be aiming for the family audience, at least in the early stages of this two-hour film. There is much for younger viewers to enjoy, and a brief look at Okja’s excretory functions will probably have kids giggling.

The satire ramps up with the appearance of a gaggle of corporate drones and their TV spokesperson zoologist, Geraldo-like Dr. Johnny Wilcox (Jake Gyllenhaal), come to reclaim Okja as the winner of the Mirando Corporation’s competition for the biggest and best of the trial pigs. She is to be tested, studied, and honored in New York, and much to Mija’s horror, eventually slaughtered for meat. Unknown to the girl, the “all-natural” story of the pig’s provenance has all along been pure fiction and PR hype.

Some rollicking action is involved in getting the giant pig as far as New York, but not before she is pig-napped, released, and pursued with a scheme to free her, by an international animal rights group of activists headed by Jay (Paul Dano), who engage Mija in their plan. Aspects of this part of the story are sometimes brutal, with Okja being abused and tortured (more heard than seen), and some violence among the human characters that is not played for laughs. 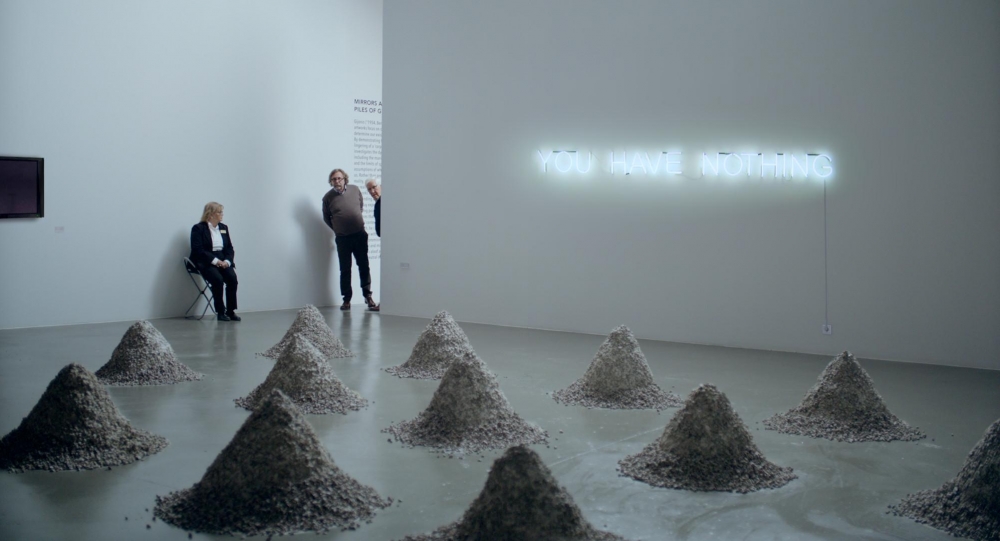 All was calm in the Palais for the press premiere of the second competition film of the day, “The Square” by Swedish director Ruben Ostlund (“Force Majeure”). It’s a wicked and sometimes hilarious satire on the world of contemporary art and museums, raising questions concerning personal responsibility and humanity, treating them as comic fodder.

Christian (Claes Bang, a dead-ringer for a 40-something Gregory Peck), is chief curator for the ultra-hip, ultra-chic X-Royal Museum of avant-garde art. He’s handsome, pretentious, and arrogant in the privilege and power that make him the peer of the wealthy. In addition to calling up a few art-world clichés, Ostlund creates some very accurate parodies of the art, artists, and lectures that might be found in a museum devoted to the kind of conceptual art that might leave the man on the street clueless.

He’s so paranoid and protective of his image that he refuses to give up his used condom to the blonde American reporter (Elisabeth Moss) with whom he has a drunken one-night stand following a museum party. In one of the funniest sequences, he stages a black-tie gala for wealthy donors, at which a performance artist posing as a feral animal approaches the guests as his prey.  Indulgent laughter turns to fear and herd-instinct behavior as the ballroom erupts in havoc.

Christian’s wallet and phone are lifted by a pickpocket in a strange incident on the street. With the help of a junior colleague, he tracks the location of the phone to a high-rise apartment building in a less prosperous neighborhood. Although he drops an accusatory flyer in every one of the building’s mail slots, he is so fearful of who might contact him that the address he leaves is a nearby 7-Eleven. Both gestures will come back to haunt him.

At the center of the plot is the plan for a new exhibition to be titled The Square. A small square is marked out in the cobblestone plaza in front of the museum with a plaque that reads in part: “The Square is a sanctuary of trust and caring.” The curator explains to an audience of well-dressed patrons at a cocktail reception that the piece will be an invitation for passersby to engage compassionately with anyone standing within the delineated space. Ostlund, of course, has cynical fun with this, populating the plaza with all manner of homeless people who don’t get a second look in the normal scheme of things.

A millennial pair of PR experts, hired to create a publicity campaign for The Square explain to staff that the museum’s competition for press is not with other museums, but with front-page disasters and terrorist acts. Based on their research into the most attention-grabbing images, they come up with a controversial promotional video that includes a blonde child, a kitten, and an event that can’t be described without giving away too much. Christian approves the campaign without actually reviewing the content, and the video goes disastrously viral, generating the kind of publicity no museum ever looks for. Christian’s career goes awry, and the glimmer of self-knowledge that dawns comes with a heaping helping of regret.

In the episodic construction of “The Square,” and its deadpan approach to comedy, Ostlund’s work begins to resemble that of another Swedish film satirist, Roy Andersson (“A Pigeon Sat On a Branch Reflecting Upon Existence”). Ostlund is not quite that good yet, but he’s getting there. “The Square” begins to lose focus in it last half hour, and its poignant side didn’t always come fully developed, but this is definitely a director with a promising future. 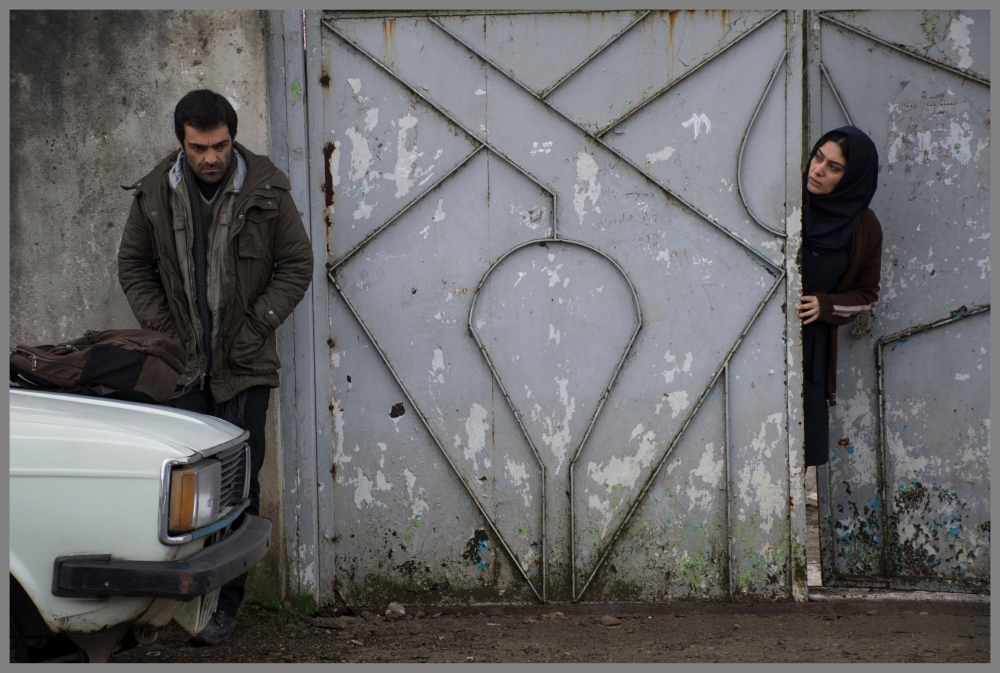 In 2013, Iranian director Mohammad Rasoulof was at Cannes with “Manuscripts Don’t Burn,” a searing drama alleging his government’s routine torture and execution of dissident academics and writers. The film was so dangerous to its makers in its implications that the actors were not publicly named in order to protect their safety. Rasoulof himself lives under a suspended prison sentence for alleged propaganda and collusion against the regime.

Rasoulof is back in Cannes today, in the A Certain Regard sidebar with “A Man of Integrity.” Like his previous films, it has been made secretly, beneath the radar of government censorship, and consequently without the technical advantages and amenities of mainstream production. This film examines the effects of corruption on a man, his family, and his marriage. The film presents a slowly developing trajectory as an honest man becomes faced with untenable moral choices.

Reza (Reza Akhlaghirad) and his wife Hadis (Soudabeh Beizaee), a school principal, are urbanites, who have abandoned Tehran to raise their young son in the relative isolation of a rural area. Reza operates a fish farm, raising the small goldfish purchased as living emblems of prosperity at the New Year, a symbolism that will not be lost on Persian viewers. Ironically, not a single one of Rasoulof’s six feature films is in distribution in Iran, as all have been banned, including this one.

The community in which Reza settled is one in which a stranger could live for decades and still be considered a newcomer by the locals. He is additionally regarded with suspicion for his strict refusal to engage in bribery. It’s a stand that has an economic impact on his life, since cash changes hands among friends, neighbors and tradesmen to secure both small and large favors, and social services are virtually unobtainable without greasing someone’s palm. From the mayor on down every official in the town is linked by a network of bribery, and the associated unspoken rules for doing business.

A large corporation is buying up tracts of land and makes an offer for Reza’s farm, which he refuses. One day the water from an irrigation canal that he relies on to supply his fishpond is cut off and the fish die. Suspicion falls on the corporation’s land overseer, a thuggish local kingpin with whom Reza has a dust-up of a fight. The overseer’s false accusation of a broken arm puts Reza in jail for several nights, and results in a lawsuit for heavy personal injury damages.

Bit by bit, Rasoulof hems in his protagonist, cutting off all avenues of escape with his moral values intact. Hadis crosses the line ethically in a backfired attempt at a solution by threatening the daughter of the overseer, one of her school’s students. Each friend or associate who offers to help outlines to Reza a plan that involves bribery and paid witnesses--all he has to do is play the game and his troubles will be over.

In this story that is in its own way as despairing of the validity of the social contract as was the plot of “Manuscripts Don’t Burn,” an escalating chain of tragedies leads to a point at which Reza finally does resolve to play the game with a vengeance. Just as he sees accepting the status quo as the sword that will slice the Gordian knot, he discovers that he was never anything but a pawn in an even larger game.

Cannes 2017 Segment 3: RogerEbert.com from The Mint on Vimeo.