A gale-force wind blew through Cannes last night, giving the red-carpeted steps of the Festival Palais a timeworn look under a layer of swirling dust and wads of stringy fibers from palm tree trunks that rolled like tumbleweeds. Rain and cold followed early this morning.  It had to happen sooner or later. After more than a week of perfect Riviera weather, we see the less-perfect side of Cannes.

Premiering this morning, “Dheepan” by Jacques Audiard, follows his 2012 “Rust and Bone” and the 2009 Oscar-nominated Cannes Jury Prize winner “A Prophet.” Similar to “A Prophet,” this film is set in the multi-cultural France of immigrants, gangs, and hardscrabble living, where violence can erupt without notice, and a man does what he needs to do to survive.

“Dheepan” features novelist and playwright Jesuthasan Anthonythasan, a former child soldier in the Tamil Tigers in his native Sri Lanka in the title role. Audiard appears to have adopted many of the circumstances of his actor’s life and background as an immigrant with a compromised past in shaping the story.

As the film begins, a former fighter in Sri Lanka’s civil war immigrates to France under false pretenses. He forms a feigned family with a woman who is a stranger to him, and a nine-year-old orphan girl they hurriedly nab from a group of refugees. The three now match the profile of the dead family whose passports he has acquired, and whose names they will assume in their new life.

Granted asylum status in France, Dheepan gets a job as the janitor and handyman in a public housing project.  Audiard portrays the family’s rocky adjustment in the French-speaking free-for-all of the projects, where drug dealing and gang rule are the norm. A nightly parade of dealers, gang-bangers, and revelers takes over the street each night. As the family watches from a window, the woman Yalini marvels, “How strange, like being at the movies.” Behind closed doors, Dheepan, Yalini, and the child chafe under the stress of maintaining the illusion that defines their lives.

Dheepan seeks to forget the past, but the past keeps reaching out to him in new guises. Yalini is the wild card, constrained by her wife-like status but attracted to a gang ringleader. Audiard keeps the plot edgy. We know something will blow sooner or later, just not when or where. 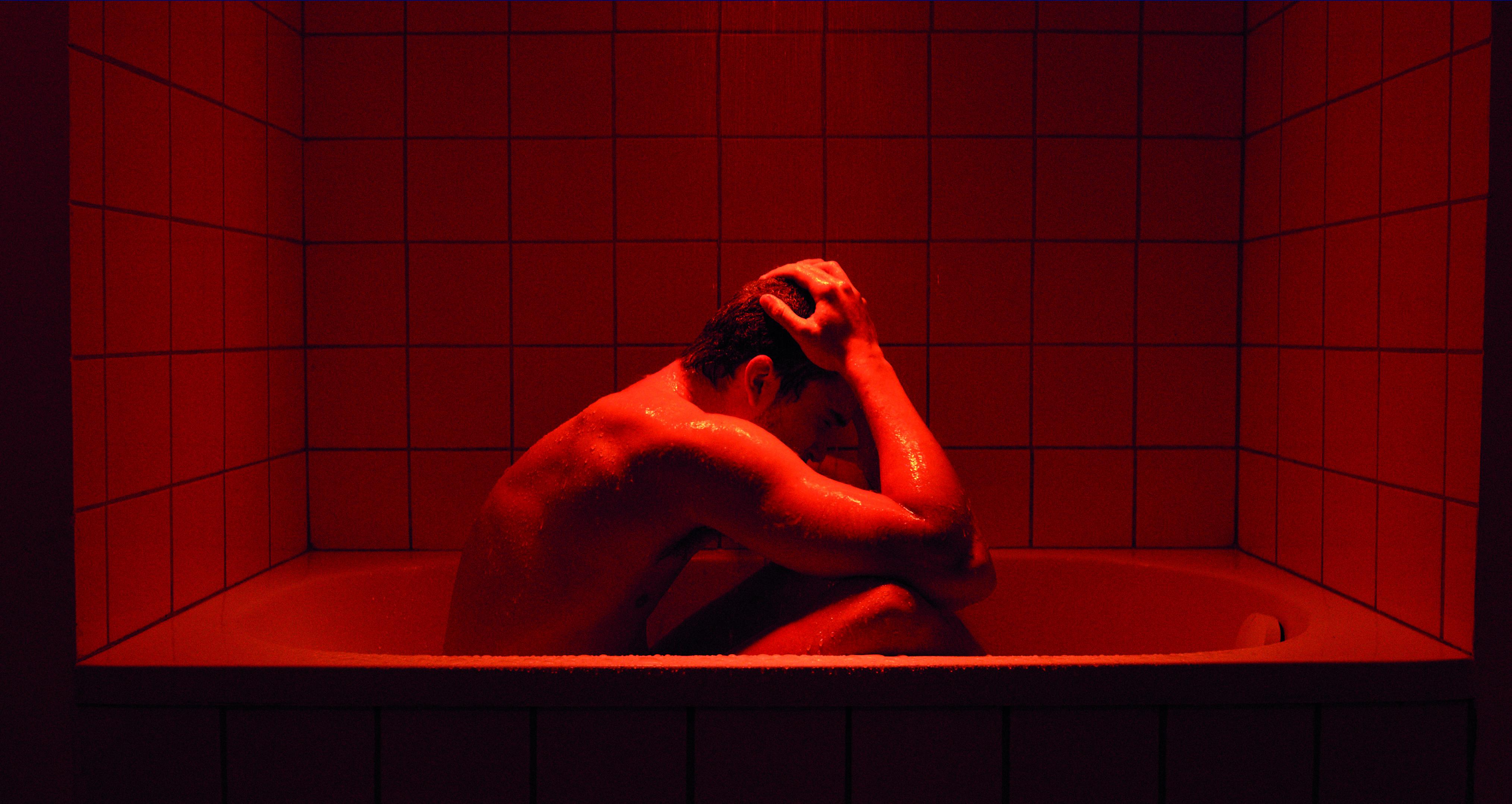 A real blowout of a mob scene was expected for today’s press screening of Gaspar Noe’s “Love” in widescreen 3-D. The out-of-competition film had the official red carpet screening last night after midnight. Today, we day-timers had our chance at a film preceded by its XXX-rated reputation. In a typically perverse festival move, the screening was scheduled for a smaller theater, assuring that hundreds of clamoring press would not be admitted.

That was ironic, considering that “Love” triggered the most walkouts of any film in the festival so far. Gaspar Noe, auteur of films including “Enter the Void” and “Irreversible” is a diehard provocateur, but with “Love” he succeeds in proving that there is hardly anything more boring than watching other people have sex for more than two hours.

The plot is minimal. The Paris-based American film student Murphy (Karl Glusman) has lost Electra (Aomi Muyock), the love of his life, by impregnating another woman. Like all Noe heroes, he’s a complete jerk, a bellowing, randy, arrogant specimen of manhood. In a regretful reverie he recalls every sexual detail of his relationship, not only with Electra, but with the women with whom he cheats on her. These incidents are recalled in reverse order going back to the day they met, with countless sessions in bed depicted in excruciating detail. "I’m a loser, a dick, and a dick has no brain,” he howls in agony.

The press kit for “Love” is full of romantic twaddle about portraying the passion of a young couple in love. “I want to make movies out of blood, sperm and tears,” declares Murphy (Karl Glusman) in the film. If I thought Noe had more of a sense of humor, I’d suspect that his real aim is to be the first director to put a full-frontal microscopic close-up of an ejaculating penis on the screen in 3-D. 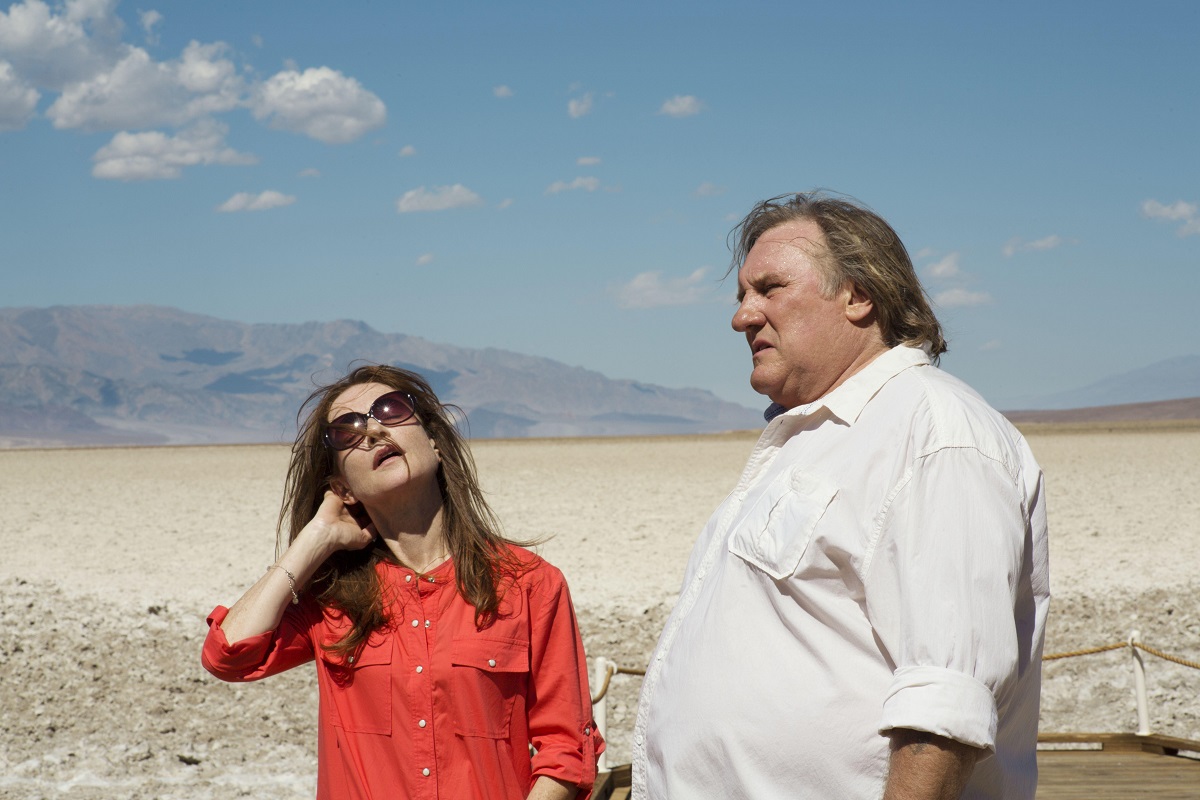 “Valley of Love,” the latest by Guillaume Nicloux (“The Kidnapping of Michel Houellebecq,” “The Nun”), is a slight but entertaining piece of hokum set in Death Valley, and serving as a vehicle for iconic French stars Isabelle Huppert and Gerard Depardieu. The film represents Nicloux’s first time in competition in Cannes, and may just as well have been selected to secure the presence of beloved stars on the red carpet late in the festival.

The premise of the story is that Isabelle (Huppert) and Gerard (Depardieu), divorced from each other, are meeting for a week in Death Valley in answer to the exact written instructions left by their adult son Michael, who has committed suicide. Both parents were estranged from Michael, and long out of touch with each other until their meeting in a desert vacation complex. She’s reserved and cool; he’s a fat slob in a loud shirt and a baseball cap. The instructions call for visiting seven of the valley’s landmarks in seven days. Their son has sworn in his suicide note that he will make his presence known to them.

Some of the dialogue has an improvised flavor that doesn’t do justice to the level at which Huppert and Depardieu are functioning in their roles. Clumsy encounters with other motel guests, clearly non-professional actors, serve to break the spell and keep the story from feeling all of one piece.

The extreme heat of the Death Valley location perceptibly takes a toll on Huppert and Depardieu, with sweat and flushed faces evident as they hike trails in search of the ghostly contact. One or both is on screen in every scene. Total pros that they are, these stars give the script their all in performances that hold nothing back, often elevating it with an affecting gravity.