Canadian Atom Egoyan has always been desperate to be weird. He’s fascinated by offbeat and twisted sexuality, guilt, misplaced suspicion, and electronic surveillance, as seen in "Family Viewing" (incest), "Speaking Parts" (exotic sexual tastes, voyeurism), "Exotica" (prostitution, underage sex) and "The Sweet Hereafter" (conspiracy, communal culpability). His films boast the trappings of evil and perversion, but the true heart of darkness always seems to elude poor nice-as-they-come Atom. So it is with his new Cannes premiere "The Captives," another film that addresses a theme of pedophilia. 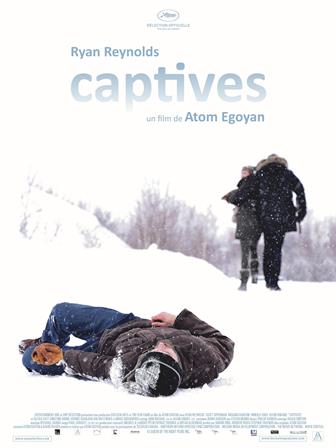 On the way home from ice skating practice, nine-year-old Cass is snatched from her dad Matthew’s (Ryan Reynolds) pickup, where he’s left her momentarily in order to shop for dinner. Rather than search for possible clues, police detectives Nicole (Rosario Dawson) and Jeffrey (Scott Speedman) focus all their attention on Matthew, planting the doubt in his wife’s mind that will destroy their marriage.

This straightforward aspect of the plot is subsequently revealed to be a flashback, as the story jumps forward variously to six years after the abduction, then eight years, and finally ten years. Intercut with the parents’ story and the evolving relationship between the two cops are scenes of a teenage Cass imprisoned in the home of her captor, where, having outgrown her role as a sex object, she now performs as an online recruiter to lure other children.

A villain worthy of a comic book, with a bland face, pale scary eyes and a creepy little mustache, is almost laughable.  Embellishments include so many versions and forms of video and internet surveillance, and so many bizarre contrivances, coincidences, arcane clues and baits that the plot begins to collapse in confusion.

Periodic attempts to up the tension by way of the rising volume of ear-splitting music miss the mark. The Grande Theatre Lumiere is equipped with one of the best theater sound systems on earth, and one incidental benefit is that musical pretension doesn’t stand a chance of not being heard for exactly what it is. “This is great” a man a few rows behind me called out sarcastically as the insistent pounding chords and a wacko row of burlap-balled nursery trees led Matthew to a significant discovery.

Egoyan is anything but an action director, and his introduction of elements including a high-speed car chase and gunplay come off as perfunctory and lifeless.  As mentioned at the start, Egoyan’s a nice guy, so I hope he wasn’t listening to the whoops and boos that greeted his closing credits.