It’s not quite the mid-point of the festival yet, but the fashion statements in the 8:30am press screenings are already edging toward grunge. Down in the trenches, I mean seats, where we journalists sit, this is not the festival of diamonds and haute couture evening gowns. Jeans, t-shirts and utilitarian jackets tend to be the unisex rule of the day, every day until the clean shirts run out.

If I had been hoping for the vicarious thrill of high fashion on the big screen this morning, that hope was dashed rather quickly with the competition premiere of Bertrand Bonello’s "Saint Laurent," the second of two rival French biopics of fashion icon Yves Saint Laurent. According to Bonello’s interview in the press kit, the film’s producers recruited him for this project after his 2011 film "House of Tolerance" (aka "L’Apollonide") premiered at Cannes.

"House of Tolerance" was set in a Paris brothel in 1899, and although the film doesn’t gloss over harsh aspects of the women’s lives, it also visually revels in the sumptuous décor, costumes, textures and dramatic lighting of the period. Bonello would have seemed a good fit for a subject that calls for him to scale the heights of design and luxury fashion but also plumb the depths of depression, drug use, and casual sex.

"Saint Laurent" gets off to a promising start in the year 1967, as Bonello reveals the process of the atelier. The designer’s minions construct prototypes of the sketched designs from muslin and linen, and the master’s hands make minute adjustments. A letter from Andy Warhol, a song by the Velvet Underground, and shots of store windows evoke the time. Then, several years worth of work from Saint Laurent’s most creative period are dispensed with in a brief sequence in which a parade of facsimiles share a split screen with news footage circa 1968 and 1969.

That sequence turns out to be just about the last we’ll see of what Saint Laurent actually did for a living. Fashion is not the foremost focus of "Saint Laurent," in large part because it is not an authorized biopic. That distinction goes to "Yves Saint Laurent" by Jalil Lespert, the other film on the designer’s life. Although Bonello claims to have started his production first, Lespert’s film, which is due to open in the U.S. this summer, has a lock on both the YSL logo and depiction of the authentic fashions. 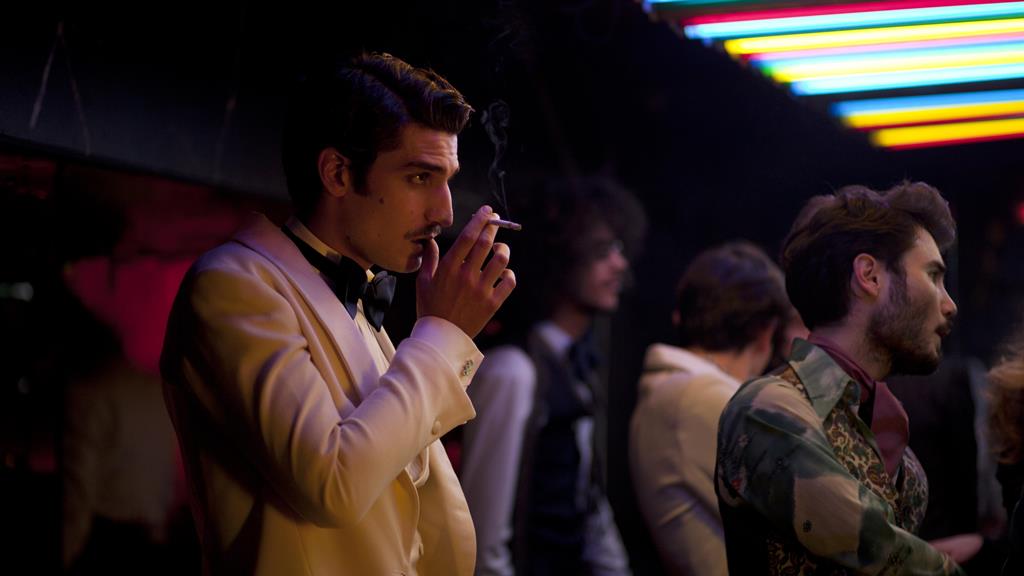 Bonello is left to make the most of the designer’s seamy extracurricular social life when cheating on longtime partner Pierre Berge, and with the business side of a fashion franchise. He relies heavily on the talents of actor Gaspard Ulliel as Yves. Ulliel has the too-handsome look of a model, and portrays Saint Laurent as congenial, entertaining, and highly social; in other words, all the things that the man himself was reputed not to be.

"Saint Laurent" has a much deeper flaw than a shallow characterization, and it frequently falters in visual interest. Much of it would look better on the small screen. This is a film loaded with talking heads against the blankness of empty walls. Subjects are plopped in the middle of the screen, and there are few long shots, and a random-seeming use of the split screen.

Only two scenes struck me as having the ring of real emotion. In the first, an important client (Italian actress/director Valeria Bruni Tedeschi) has a private fitting with Saint Laurent. She is not model-thin or model-pretty, but has a shy, vulnerable face and awkward body language. She shrugs uneasily while standing before him wearing one of his most sharply tailored masculine suits for women, and questions whether it becomes her. The designer subtly flatters her, adds a necklace, and gently leads her in the ways of making it her own.

In the second scene, a handful of Saint Laurent’s pills is scattered on a marble floor while he lies passed out in bed. His cherished pet, a stocky little black-and-white dog, starts lapping them up, following them with his nose, slobbering and savoring each, as dogs will do. The dog is next seen lying on his side, panting his last in the closest thing "Saint Laurent" has to pathos. I certainly hope it was a stunt dog.

I found tonight’s competition premiere, "The Wonders" by Italian director Alice Rohrwacher ("Corpo Celeste") thoroughly engrossing, although many in the audience didn’t feel the same, judging by the number of walkouts. "The Wonders" has the feel of a documentary, although it’s not. That aspect is enhanced by the fact that the film is episodic, open-ended, and the story is a process rather than a single line of narrative. 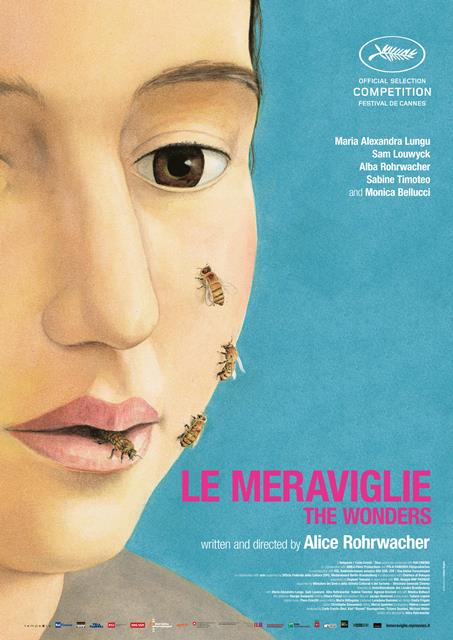 "The Wonders" is set in a rural area near Tuscany, where a beekeeper family is seen in the course of a few weeks of summer. Their house is a derelict shell, their workshop an unsanitary mess, and they’re a chaotic, ragtag, unorthodox unit. Dad is a German hippie, mom is Italian, and there are four daughters, twelve-year-old Gelsomina being the most perceptive, responsible, and closest to her parents in her uncanny ability to help them sort out life’s complications. This is a portrait of childhood more than anything else; everything and nothing happens.

The satisfying aspect of this little low-key film is that its crises and its high points are brief and life is ongoing. There’s a family controversy over Gelsomina’s secret plan to enter their farm in a contest for a reality show (hosted by Italian star Monica Belluci in a wonderful cameo), and dad is angry, but he gets over it. Mom threatens to leave over a money problem, but she gets over it. The bad things blow over and little girls still stomp in puddles after the rain. It might sound sappy but it’s not.

"The Wonders" is semi-autobiographical for director Rohrwacher, who came from a rural German/Italian family, and shot the film near her hometown. The beekeeping and honey production scenes are real, even when actors are scooping a swarm of bees into a wooden box with their arms, or down on hands and knees in a sea of spilled honey. The most engaging aspect of the film is the fact that Rohrwacher portrays a family that feels safe. They’re poor; their livelihood is constantly threatened; they argue and sulk; they’re not perfect, and yet they’re safe in each other’s love. There aren’t many films here that put that concept forward.

Cannes is not just about art and prizes, but about the very serious business of buying and selling films, raising money for films that haven’t even been made yet, and publicizing films that are still in production. The Cannes film market, an enormous sidebar to the official festival, is the largest in the world, and hundreds of distributors and production companies are represented.  Many of them stage publicity events, everything from goofy street performances to formal press conferences and parties meant to create buzz and generate press for the films.

An admirer of John Woo’s work, I was eager to accept when producer Terence Chang invited me to attend Woo’s publicity event for his new film "The Crossing," now in post-production. Originally from Hong Kong, Woo ("Red Cliff") has been working in mainland China for the past several years following the decade in Hollywood that resulted in films including "Mission Impossible II" and "Face/Off." "The Crossing" is tentatively scheduled for release in October, and the large cast includes Zhang Ziyi ("The Grandmaster," "Crouching Tiger, Hidden Dragon") and Takeshi Kineshiro ("Red Cliff").

Just going to an event like this is an archetypal Cannes experience. The long driveway leading up to the entrance of the palatial Majestic Hotel was blocked by a seething mob. Guards were shouting and holding off the crowds while a limousine unloaded some star or another surrounded by photographers.  Which star? Who knows? Something like this happens about every fifteen minutes on the street here.

A trailer for "The Crossing" debuted to a room crammed with around 250 people sitting or standing against the walls, including a heavy representation of press from throughout Asia. According to Woo, "The Crossing" is "a love story spanning fifty years of Chinese history." He was anxious to emphasize that the film is a romance despite the fact that he is best known for directing male-oriented action films. It certainly looked romantic judging by the trailer, with some inimitable Woo set pieces, and strong hints of beloved Chinese themes of separated families, star-crossed love, and the tragedy of war.

Press cameras were snapping for the director and the eight cast members on stage so non-stop that the room appeared to be lit by strobe lights. Asked why she accepted her role in "The Crossing," Zhang said, "It’s the first time I cried so much reading a script." Of course this kind of event is mostly smoke and mirrors and hype, but it’s fun to watch. The photos and film shot at this session were certain to be online within minutes, helping raising the film’s profile immeasurably (and possibly raising some completion dough), which is the whole idea.

Advertisement
Don't miss the following special events at the festival: