Two misses, one hit: that’s the ratio for which you prepare yourself when attending the Berlinale. And it seems especially true of the main competition. “The Party” is, I think, everything that writer/director Sally Potter wanted it to be: a taut, biting, farcical pile-up of bourgeois neuroses, shot in delicious monochrome widescreen and boasting a cast to die for. Kristin Scott Thomas is Janet, a political bigwig who has invited an ensemble of pals to dine with her and her husband Bill (Timothy Spall), a former Yale professor, to celebrate her recent appointment as Minister of Health in Westminster. Said pals include April (Patricia Clarkson), from whose scorched-earth cynicism no other guest is safe—not even Gottfried (Bruno Ganz), her happy-go-lucky husband, whose conversational shtick fails to amount to anything more than epigrammatic platitudes.

Soon after, Martha (Cherry Jones) arrives with her younger girlfriend, Jinny (Emily Mortimer), who wastes no time in stealing Janet’s thunder by announcing her pregnancy—with triplets—which prompts a visibly distracted Bill to share his own news: he is terminally ill. Bill’s revelation upsets nobody more than final guest Tom (Cillian Murphy), a banker who’s arrived with a stash of cocaine in his jacket—and a gun, with which he intended to kill Bill for reasons that are more strategically concealed than the weapon itself (the first image of the film, a flash-forward, is of Janet aiming the pistol to camera).

At 71 minutes, Potter’s film is a mercifully short comedy in comparison to fellow competition entry and two-hour bizarro “The Dinner,” with which it shares a general theme: the sour self-preservationism that pervades the ruling and cultural classes. The ensemble of highly-strung characters that make up this unsympathetic tale of blood, sweat and vomit is less naturalistic than satirical, and Potter plays things in typically broad fashion. When Tom frantically snorts cocaine in a locked bathroom, we get the grotesque, ritualistic close-up (Danny Boyle lite) on his instantaneous satisfaction—as if doing a line was ever anything more to a London banker than a cripplingly banal, desperately routine reflex.

At the risk of reducing art criticism to mere utilitarianism, however: what’s the point? Plenty of laughs were heard during the press screening I attended, which suggests its portraiture of upper-class bile was recognizable enough to resonate. But Potter’s gags tend to wear thin quick; structural repetition and playing on stereotypes have been key tenets of her experimentation since the 1970s—from the wall-to-wall use of Prokofiev in “The London Story” (1986) to the rhyming couplets of “Yes” (2004). Here, her best quips are nonsensical: “Tickle an aromatherapist,” Clarkson cries, “and you’ll find a fascist.” And while the director hinted at the film’s political relevance during its Berlin press conference—naïve or wrongheaded according to one’s position—the characterizations here are too cold to be vivid, too cartoonish to be engaging, and too easy and obvious to be or do much good. 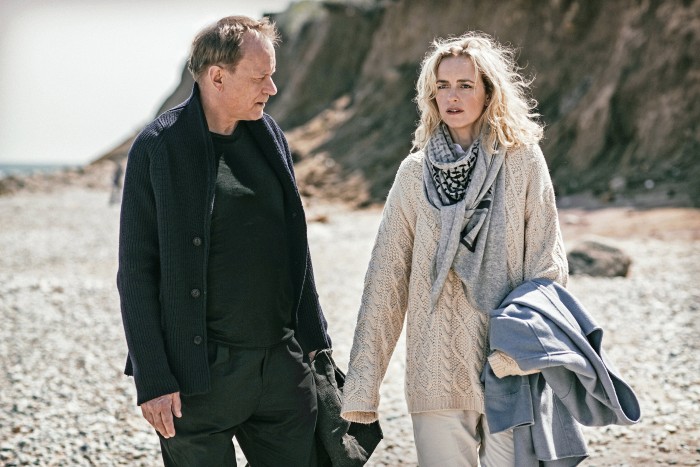 Elsewhere in this year’s generally drab competition, Volker Schlöndorff’s “Return to Montauk” shares with Potter’s film a general focus on First World Problems—failing to connect or contextualize its drama to anything beyond its bloated self-importance. Max Zorn (Stellan Skarsgård), a successful, Berlin-based author, arrives in New York to promote his latest novel, “The Hunter and the Hunted.” Between catching up with his younger wife Clara (Susanne Wolff), who lives there, and arranging meetings and public appearances through his assistant Lindsey (Isioma Laborde-Edozien), Max longs—to an irksome degree—to get in touch with Rebecca (Nina Hoss), a lawyer in downtown Manhattan with whom he enjoyed a romantic tryst 17 years ago.

Co-scripted by Colm Toíbin, “Return to Montauk” is about a celebrated, “genius” novelist who talks how he writes—which is to say, the film is a total fantasy. Though its title recalls “Eternal Sunshine of the Spotless Mind” (whose own foray into the mechanisms of memory and romance was partly set in Montauk, on the eastern peninsula of Long Island), any comparison to Michel Gondry’s work is not to Schlöndorff’s advantage: this romance is pancake flat when it comes to the central chemistry. Perhaps this is the point: when Max drunkenly shows up at Rebecca’s Irving Place apartment, there’s a palpable air of distance between them—so it’s not entirely clear why we ought to invest further energy in their rekindling flame. Hoss, when the film finally, belatedly calls for it, raises her game accordingly, but Skarsgård never quite can. It’s strange to see an actor of his talent struggle through a film in which he is fundamentally miscast, and made to suffer through line deliveries such as, “I look at you Clara, I see you.” 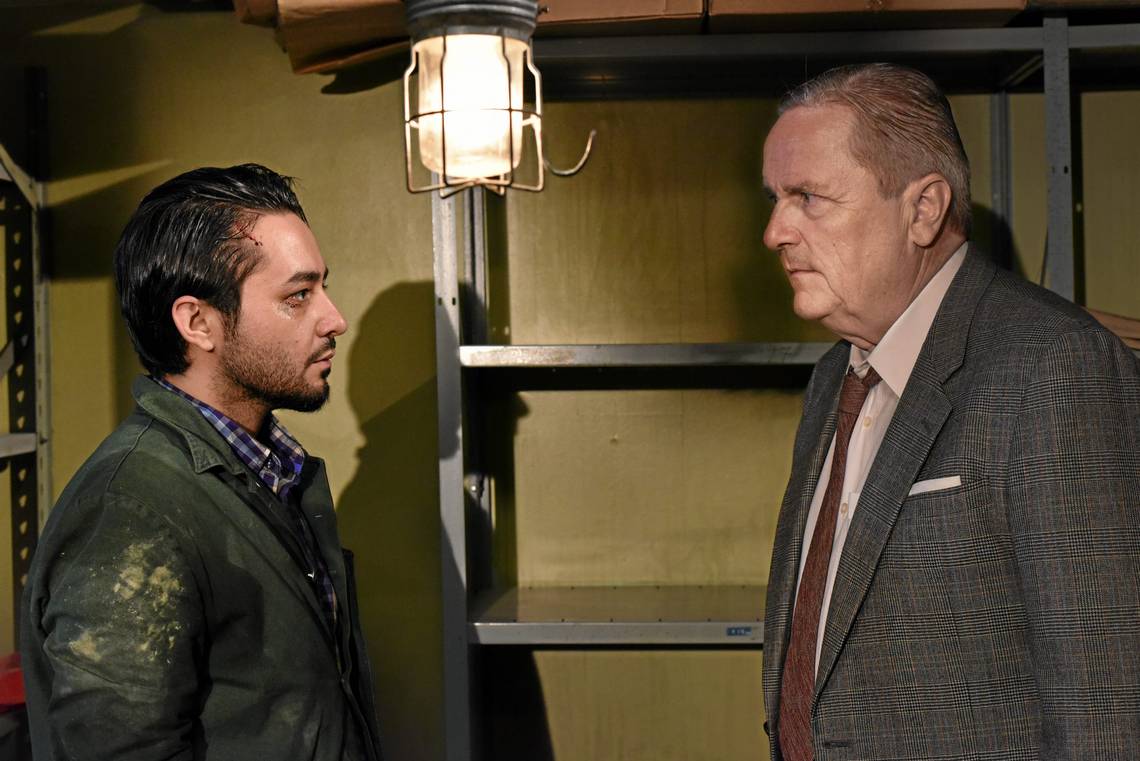 Not every film in the Berlin competition has been about rich white people struggling (or not) with worldly and/or personal turmoil. “The Other Side of Hope,” Aki Kaurismäki’s fittingly titled comedy, is a refreshingly muted response to Europe’s so-called refugee crisis. Khaled (Sherwan Haji), a Syrian mechanic, arrives in Helsinki on a cargo ship, emerging—face blackened—from a stack of coal. Having fled war-torn Aleppo, he makes his way to the nearest police station (“Are you sure?” says the man he asks for directions) in search of asylum. Khaled’s story unfolds alongside that of Wilkström (Sakari Kuosmanen), a shirts salesman who leaves his wife (ring and house keys handed in before parting, like the badge and gun of a suspended cop) and wins €60,000 and small change in an executive game of stud poker. With his winnings, he buys The Golden Pint, a minimally decorated restaurant (“makes you thirsty right away”). Slowly, in that droll, measured Kaurismäkian fashion, Khaled and Wilkström’s paths align.

If, in expanding upon the themes of “Le Havre” (2011), “The Other Side of Hope” is unusually explicit in its topicality for a Kaurismäki film, the auteur’s distinctive vision and humor are healthily intact (when one character suggests coffees to another, we jump-cut to a close-up on a bottle of porter). While one might say that in some ways this is just the kind of work the Finnish director can knock out blindfolded with both hands tied, there’s something to be said for making your work look so effortless. Beautiful, too: shot (and projected) on 35mm, the film looks and feels like it was made in another age, with a color palette dominated by metallic blues and enlivened by primary reds and jaundiced gold. The in-film universe is rooted to the usual retro veneer by combed-back hairstyles and Wilkström’s big black Checker car.

Kaurismäki’s films create their own logic. An otherwise throwaway sequence to do with sushi is made all the funnier, for instance, by another gag soon after: just when we think The Golden Pint has reopened as an Indian restaurant, we cut inside to reveal it’s a different place altogether. Comedy as resistance: driven by a persistent focus on the everyman and the underdog, Kaurismäki’s work hinges on a kind of feel-good politics. What makes “The Other Side of Hope” so enjoyable is its unapologetic faith in good people and kind gestures. And though the generally cheery tone is redressed late in the film with a brutal stabbing, my biggest laugh in Berlin this week was prompted by a bit of old-fashioned deadpan antifascist slapstick: the merry sight of a bottle, then an old man’s crutch, being smashed over a far-right nationalist’s skull.

This is the Night