B Good: A Comic-Con Panel on B Movies

"We know how bad some of the movies that get released are," movie critic and film historian Leonard Maltin told the audience for the Warner Archive B-movie panel. "Just try to imagine how bad a movie has to be for it not to get released at all." The movie he was describing is called "The Phynx," made in 1969 and never released. The storyline is like a very dumbed-down version of "Argo." A fake rock band is created to "tour" Albania so they can rescue some American hostages. What is mind-boggling is the array of '60s-era celebrities who had cameos: Dick Clark, Huntz Hall and Leo Gorcey of the Dead End Kids, boxing champ Joe Louis, "Gone With the Wind's" Butterfly McQueen, Rudy Vallee, Edgar Bergen, and…Richard Pryor. And many more.

At last it can be seen, along with a bunch of B-movie gems from the Warner Archive, available for streaming on instant.warnerarchive.com. Maltin explained that the definition of "B movie" depends on the era. During the Depression, to give audiences more for their money, the studios released second-tier films to play as double features. The A movie might have Clark Gable or Bette Davis. The B movie, like the B side of a 45 single, would have Wayne Morris or Una Merkel.

In the 1950s, as big studio films were faltering at the box office, a new kind of B movie appeared. These were the films teenagers watched at the drive-in. But both kinds of B movies were unpretentious, low-budget films with "a strong title, a big visual hook, and a gimmick," according to podcaster D.W. Ferranti. Famed producer William Castle was a transitional figure because he produced both kinds of B movies. 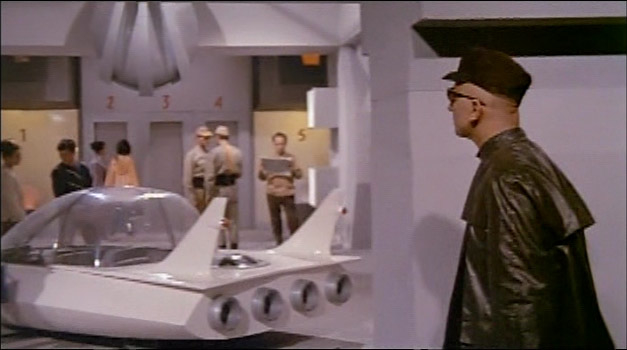 We saw clips from films with titles like "The Green Slime," "Women in Bondage," "I Escaped from the Gestapo," "The Frozen Dead," and "Wild, Wild Planet," (pictured) and taglines like "The most terrifying adventure ever hurled from the screen!" Maltin told us about Monogram Pictures, producer of many of these films, "where quality was never an issue and the words 'Take Two' were never said."

Many of these movies have not been seen for decades. "The Frozen Dead" has never been seen in its original color version until now because the studio did not want to spend the money for color prints. They are artifacts of their era and a chance to see the very early or late work of well-known actors and directors. They are entertaining in their over-the-top emotion and under-the-standard-of-quality production values. But they are also endearing on their own terms. The very fact that they were so inexpensively produced meant that they had little studio interference and could transcend their genres in unexpected ways.

They are not good, Maltin cheerfully admitted. "I'm not fond of approaching material as camp. These films deserve no mercy. But you can watch two and a half of them in the time it takes to sit through 'The Lone Ranger' and have a much better time."