"Man's true worth is in continuing life from parents to children and on to grandchildren." -Asagoro, "Zatoichi the Outlaw" (1967)

It's easy to imagine Zatoichi, the mega-popular blind masseur/swordsman, as a man on a continual personality-altering pilgrimage, since in a series of films stretching from 1962 until 1979, he was almost exclusively played by one actor. Shintaro Katsu's Zatoichi is a lover, athlete, drinker, gambler and killer. Moreover, in 1967, after fifteen films, Katsu started his own company, Katsu Productions, to make his own star vehicles. Twenty-five of the 26 entries of the film's official series are collected in the Criterion Collection's lavish new box set (only "Shintaro Katsu's Zatoichi," the second film Zatoichi film Katsu directed, is missing).

But while Katsu's Zatoichi did change, it was not an orderly progression, and you couldn't really call it a " character arc," because so many of the changes had to do with factors outside the scope of the stories. The film franchise did generally get darker over time, especially after Katsu Productions took over. But many of the films nevertheless hew to a basic formula: Zatoichi stumbles into a new town, accidentally kills or witnesses the death of an innocent, falls in love with a woman he will eventually leave, takes on corrupt local baddies, and wanders into the sunset. He's a blind antihero, and is always haunted by guilt for his unabashed love of sensual pleasures. 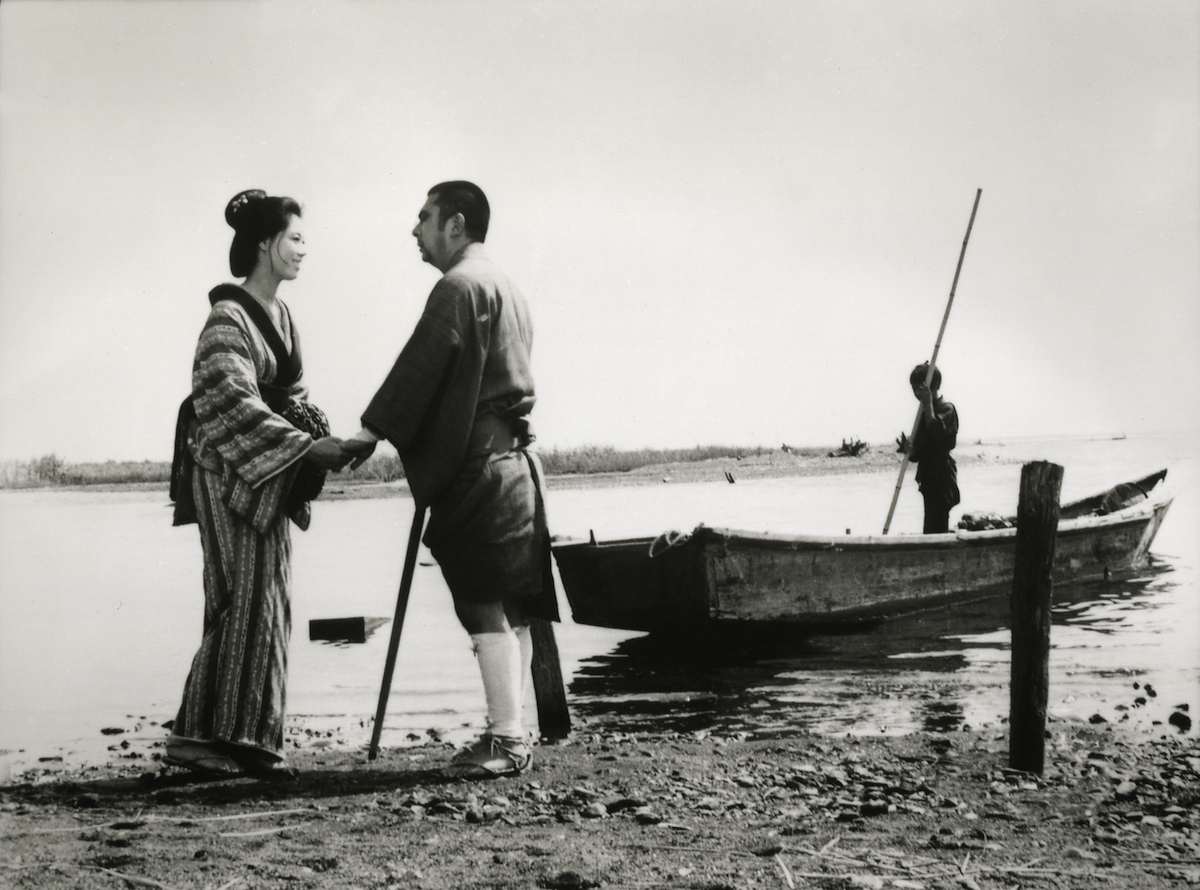 The Zatoichi film series is the longest-running Japanese action movie franchise. It ran twice as long as contemporary series "Sleepy Eyes of Death," four times as long as the "Lone Wolf and Cub" films, and eight times as long as the "Hanzo the Razor" sexploitation detective series Katsu also starred in. The Zatoichi films sometimes incorporated other popular action heroes, such as Jimmy Wang Yu's One-Armed Swordsman and Toshiro Mifune's nameless Yojimbo/Sanjuro character. It was followed by a popular '70s TV series, also starring Katsu. Then there was an enjoyable but basically unsound '80s American remake starring Rutger Hauer, then three '00s homages to Zatoichi, one starring a blind female shamisen player (she's Zatoichi's apprentice).

One of the character's main charms is that there's almost nothing he can't do.  The best films in the series don't transcend their "chanbara" (sword-fighting) genre, but they do bring out the best in the character, if only in fits and starts. Katsu's performance did evolve, though, even if the character did not keep pace.

Zatoichi is very slapstick-y thanks Katsu's theatrical training (his father was also a "kabuki" performer). The actor was hired to play Zatoichi because he'd already played a villainous blind swordsman in "Blind Menace" (1960), but his Zatoichi is a kid in an adult's body. He has a childlike need to insert himself where he isn't wanted, and loves to dance, to sing, to touch. He's also a con-man in that every exaggerated gesture he makes is a public performance. In the early films, you can see Zatoichi's relative innocence on Katsu's face. The swordsman always ashamedly jokes about how grotesque he looks when he eats, but in the later Zatoichi films, he starts to look more monstrous. This is partly because of Katsu's real-life heavy drinking and drug use, but his physical decline works with the films, making the character's usual world-weariness particularly believable in later entries. 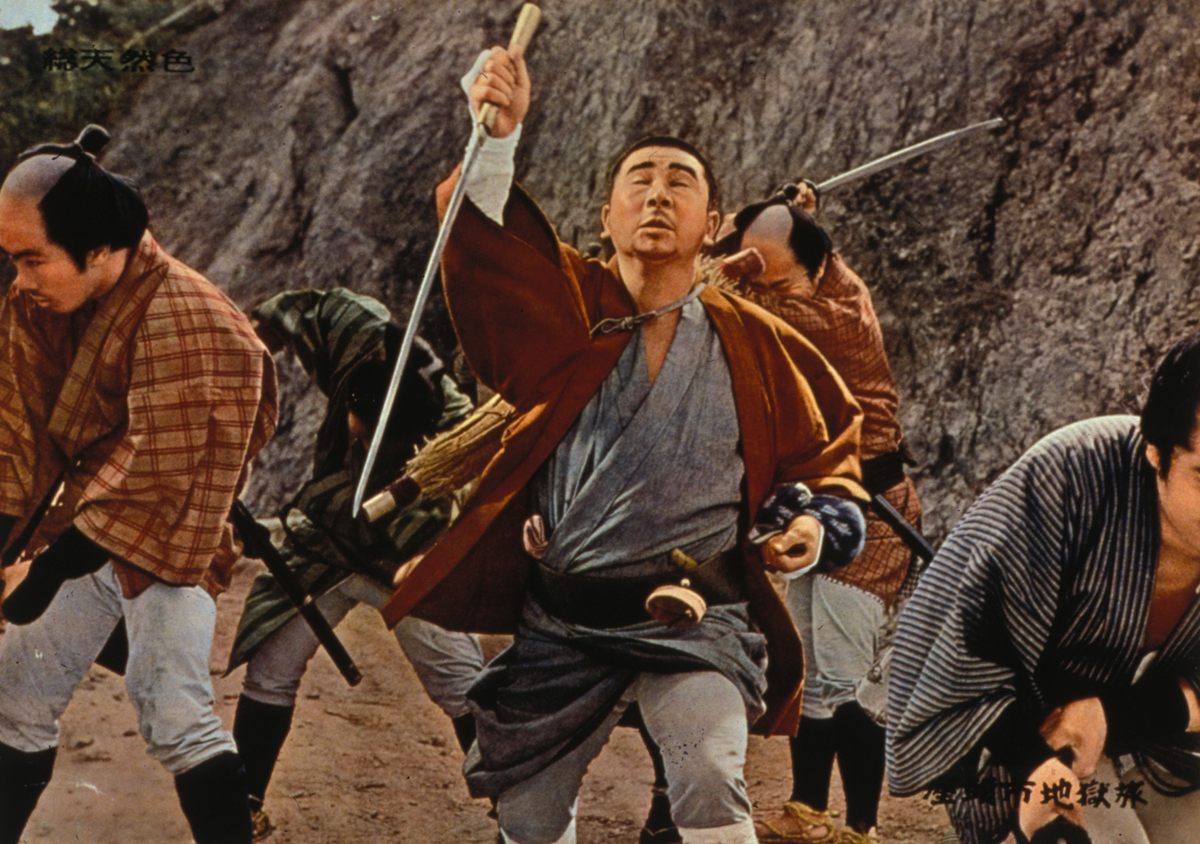 While Zatoichi prides himself on his "quick-draw" style of sword-fighting, his fighting becomes increasingly messy, and gore-soaked in his '70s adventures. Instead of posing dramatically after making jackrabbit-fast poses, he huffs and puffs his way through enemies, flailing his cane-sword. When he exhaustedly fantasizes about bedding a woman whom he promised to look after in "Zatoichi's Conspiracy" (1973), he sounds and looks dog tired. And when he reaches for gold shavings at the end of "Zatoichi Meets Yojimbo" (1970), it feels like a major admission of defeat.

Still, generally speaking, the Katsu Productions entries are not better because they're darker than their predecessors, nor are the earlier, Daiei titles better because they're more light-hearted. Most of the Zatoichi films directed by Kenji Misumi, especially "Samaritan Zatoichi" (1968) and "Zatoichi and the Chess Expert" (1965) are exceptional. Misumi has a real eye for visual composition, and it shows in Katsu Productions titles like "Zatoichi Goes to the Fire Festival" (1970).

But other stand-out titles, like "Zatoichi On the Road" (1963) and "Zatoichi the Outlaw" (1967) are noteworthy for how well they work within the series's established formula. And some of the film's darkest titles are only fitfully engaging. "Zatoichi's Conspiracy," a psychedelic entry directed by Katsu, is alternately absorbing and tedious while "Zatoichi Meets Yojimbo" is over-stuffed, but frequently exciting. The best part about having almost all of the Zatoichi films in one set is being able to ignore whichever titles you want. Continuity is still the thing, but only when you want it to be.