Transcript from pages 74-77 of Afterglow, A Last Conversation with Pauline Kael (2003), by Francis Davis.

Q. You were famous -- infamous some might say -- for never seeing a movie more than once.

A. More time? I still don't look at movies twice. It's funny, I just feel I got it the first time. With music it's different, although I realize that sometimes with classical works, I listen to them with great enthusiasm and excitement the first time, but I'm not drawn to listen to them again and again. Whereas with pop, it's just the reverse. Give me Aretha singing "A Rose Is Just a Rose," and I can play it all day long. And I can't explain that.

Q. Do you think that even seeing a movie you love no more than once is, in some ways, characteristic of your generation? I mean, in the days before repertory houses and cable movie channels and video cassettes, a new movie came to your neighborhood, you saw it, and then it was gone. You remembered the good ones, but you were rarely given an opportunity to see them again.

A. Well, often when you were a kid, you would stay for the next show, so you saw the movie again that same day. But you don't do that when you grow up. At least I don't.

Q. As a matter of fact, they no longer let you stay for another show.

A. Yes, they clear the house now and try to make it seem that it's for your benefit.

Q. They say they have to sweep.

A. Only they don't sweep. But I can't explain some of these things--why people respond so differently to the whole issue of seeing a movie many times. I'm astonished when I talk to really good critics, who know their stuff and will see a film eight or ten or twelve times. I don't see how they can do it without hating the movie. I would.

So you haven't broken down and said, I'm going to watch "Nashville" again today?

A. No. I was thinking about it, because this new---what are the initials?

A. ...is supposed to be coming out, and because I just read an absolutely splendid article on "Nashville" that was downloaded for me from Salon. It's by Ray Sawhill, and I think it's the best piece on movies I've read all year. It recalled for me the excitement I felt when I wrote about "Nashville," twenty-five years ago.

It's fun reading terrific articles and reviews. There just aren't enough of them. Most of the good people now seem to be on the Web, writing for Salon or Slate.

Q. Do you cruise the Web for reviews?

A. I don't cruise anything. They get downloaded for me by friends. I'm a mechanical idiot and always have been. That's why I wrote by hand. It became sort of an organic process, but I think it was an excuse so I wouldn't have to learn to operate the machinery. 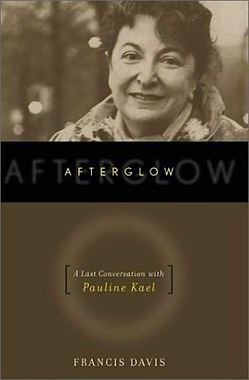 A four-part conversation in 1982 between Pauline Kael and the Canadian film critic Brian Linehan. Each part begins with the same set-up, so don't be thrown off.
Advertisement