Who Gets to Be a Hero: A Look Back at "Attack the Block"

As blockbuster sci-fi films get more empty-headed and pointless, 2011’s lean, smart “Attack the Block” looks better than ever. The film's story concerns the events of one night where a group of South London teenagers defend their Council Estate from alien monsters. "Attack the Block" deftly avoids the “poverty porn” pitfalls of its setting and characters. The buildings and hallways are shot to resemble the seventies industrial sci-fi look of films like "Alien" and "Silent Running." The cast is led by John Boyega (who will be one of the leads in December's "Star Wars, Episode VII: The Force Awakens") as Moses, and Jodie Whittaker as Sam, a nurse who lives in the teenagers’ building. Moses and the gang first meet Sam when they mug her and later when they bring a wounded companion into her apartment. They are people—not cannon fodder or back patting lessons in how deep down we’re all the same. Moses is an imposing, intimidating figure but director Joe Cornish lets the camera linger on his face and Boyega fills it with the compromises and dashed dreams to which he’s already acclimated. His gang are a delightfully maddening crew of young boys. They constantly try to demonstrate their machismo but clearly adore each other. We’re given intriguing glimpses of their home lives in a montage of them running to their various flats for weapons. The warmness of the decor is a contrast to the concrete and fluorescent lighting of the walking paths and garages. But mostly the film is a radical, bold-hearted meditation on who gets to be a hero, and the bodies we’re trained to view instinctively as threats. 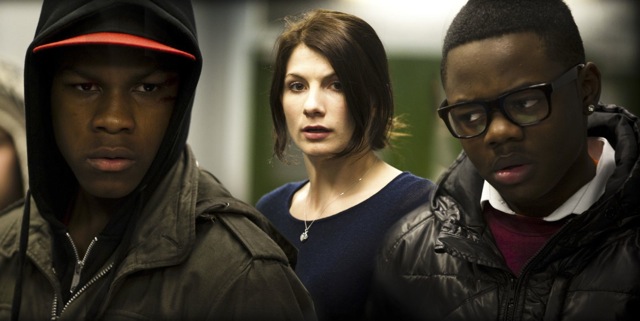 Our first glimpse of Moses is from Sam’s point of view as he and his compatriots surround her to demand her wallet and jewelry. Cornish doesn’t pull his punches in the threat they represent or Sam’s fear as Moses pulls a knife to get her to remove her ring faster. Before the event can boil over into tragedy they are interrupted by the first alien creature crash landing into a nearby car. Sam flees and Moses and company investigate the wrecked vehicle. The creature attacks and they kill it, drawing the attention of the rest of the pack as it lands. The design of the aliens is marvelous. They resemble large shaggy Muppet dogs, they have no eyes—just mouths full of jagged, sharp, glowing blue teeth. They are ravenous, unthinking brutes, the actual monsters of the movie. Not the spit out “monsters” Sam uses to describe her attackers to a neighbor, her shaking hands barely able to hold a glass. And while the boys crumbling bravado is played for laughs, it’s also upsetting to see their helplessness against this new danger. Later, it's strangely moving to see each in turn rally some form of courage. An infectious deep pride in their home arises, giving them the resolve that it’s their duty to beat this alien menace back. The boys bravery, sometimes fatal, is shot with all the gravitas of an old studio western or epic film. Leone-like close ups on their eyes narrowing with purpose. Wide shots filling the screen with action. The image of Moses leading the aliens on a chase, the boys ' fireworks being used like smoke bombs streaming around him especially indelible.

It was a provocative film when it opened to little fanfare in the United States, getting generally positive reviews and a devoted cult following. But in the wake of too many killings of unarmed Black men and women by the police, the film’s revolutionary empathy becomes downright dangerous. What does it mean to let go of culturally ingrained fears of Black men? What does it mean to admit the systemic roots of poverty and crime? What does it mean to recognize that Moses is deep-voiced and swings a sword with muscular arms but he’s a 15-year-old kid? The reveal of his age is the quiet power for the film in a nutshell. Sam is sent to Moses’ apartment to set a trap for the aliens. She notices a Spider-Man comforter on one of the beds. She asks Moses if he has a little brother. When he says no, she asks in confusion, “How old are you?” “Fifteen,” he admits, almost sheepishly. There is a horrific echo of Tamir Rice’s killing in this exchange. 12-year-old Rice was playing with a BB gun and was killed by police responding to a call that a grown Black man was wandering the park with a gun. The refusal to recognize the humanity of minorities is a poison that leaches through all strata of society. Failure to acknowledge or atone for it is destroying us faster than any alien invasion ever could.

The film lays this out in no uncertain terms. And it does so without a drop of self-righteousness, while managing to be wickedly funny too. There’s even a mordant humor in the film’s finale. The overwhelmed police are arresting the residents and unlucky visitors left and right, loading them into police vans. Moses is unceremoniously handcuffed (for the second time that night in fact) and put in the back of a van despite the protests of his friends and Sam. When Sam is asked if Moses was the mugger she reported earlier she says no, he’s her neighbor. He protected her during one very eventful night. There shouldn’t be something so unexpected when the crowd starts to chant “Moses! Moses!”. Boyega’s smile at hearing them through the walls of the van shouldn’t break your heart like it does. But in a time when a paper of record sniffs that 18-year-old Michael Brown was “no angel” as he lay dying in Ferguson there is something almost beyond words in a film that makes a character like Moses the hero. Moses is no angel either, he just saves the world.