Videos of every panel at Ebertfest 2012

My website is unique for the variety of critical voices it features. At Ebertfest this year, seven Far-Flung Correspondents and five Demanders joined directors, actors and other critics in the panel discussions.

The Far-Flung Correspondents at Ebertfest 2012. They review films of their choice on my website. For their top page, click here. Moderated by Omer Mozaffar from Chicago, born in Pakistan. The panelists, in order of introduction, are Grace Wang from China and Canada, Gerardo Valero from Mexico, Krishna Shenoi from India, Wael Khairy from Egypt, Pablo Villaça from Brazil, Scott Jordan Harris from Great Britain, and Michal Oleszczyk from Poland. A shout-out to Michael Mirasol, from the Philippines and Australia, Seongyong Cho from South Korea, and Ali Arikan from Turkey.The Demanders at Ebertfest. They review movies and video On Demand for my website. For their top page, click here. Featured are moderator Jim Emerson, editor of rogerebert.com; Odie Henderson; Jana J. Monji; Nell Minow of moviemom,com; and Steven Boone. Also these non-Demanders: Steve Prokopy of Ain't It Cool News; Dan Aronson of Fandor.com, David Poland of MovieCity News.com and David Bordwell of davidbordwell.net. A shout out to three who could't attend, Jeff Shannon and Anath White, and Don Liebenson, who arrived that afternoonThe Personal and Political in Film. Moderator, Nate Kohn, director of Eberfest. Panelists, who introduce themselves, are: Alrick Brown, Prashant Bhargava, Jacob Wysoki, Paul Cox, Seema Biswas, Robert Siegel, Kevin W. Lee, Ali LeRoi and Azazel Jacobs. This year's festival was dedicated to Paul Cox.Underrepresented Voices in Film, a panel discussion at Ebertfest 2012. Moderated by Prof. Eric Pierson of the University of San Diego. The panelists introduce themselves: Carolyn Briggs, John Davies, Raymond Lambert, Kelechi Ezie, Jaideep Punjabi, Nawazuddin Siddiqui, Darren Dean, Doc Erickson, Ishmael Ntihabose, Michell Davis, and Richard Loskosky. Available on YouTube: All the introductions and onstage discussions for every film at Ebertfest 2012 and 2011.Click here for 66 videos. 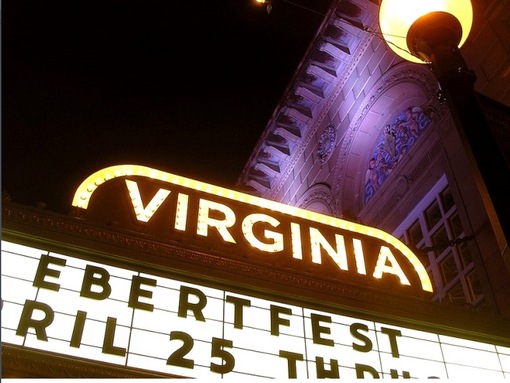 My gratitude to Andrew Stengele who streamed them live on the net. Taping of all panels was by them, except for the Demanders and Underpresented Voices panels, which were done by Fandor.com. The photo of the Virginia at night is by Ray Pride of Movie City News.