“Jeff Cohen, who played ‘The Goonies’’ lovable loudmouth Chunk, says most of the cursing in the beloved 1985 film was the result of improvisation at the behest of director Richard Donner. ‘He really wanted us to just kind of behave like kids,’ says Cohen, who's now an entertainment lawyer with his own Beverly Hills firm, Cohen Gardner LLP. ‘I hate to be the old man saying, ‘Back in the day ...,’ but I think kids were less supervised in the ‘80s versus 2016. If there’s a question of ‘if kids are unsupervised how are they going to behave?’ the answer to that [is],’ Cohen says, breaking into laughter, ‘they’re going to fight, they’re going to curse and they’re going to be kids.’ 1982 was the year that saw ‘E.T. the Extra-Terrestrial’’s Elliott call his older brother Michael ‘penis-breath’ at the kitchen table. You'll also catch a couple “s—ts" and “d—ebags" and a "son of a b—h.” The Spielberg film set off a spate of movies that similarly centered on groups of young people but had themes that would just as easily appeal to the adults in the audience: parents on the verge of divorce in ‘The Monster Squad,’ home foreclosures in ‘The Goonies,’ a single mom starting over in ‘The Lost Boys.’ It was a new era of not talking down to kids.” 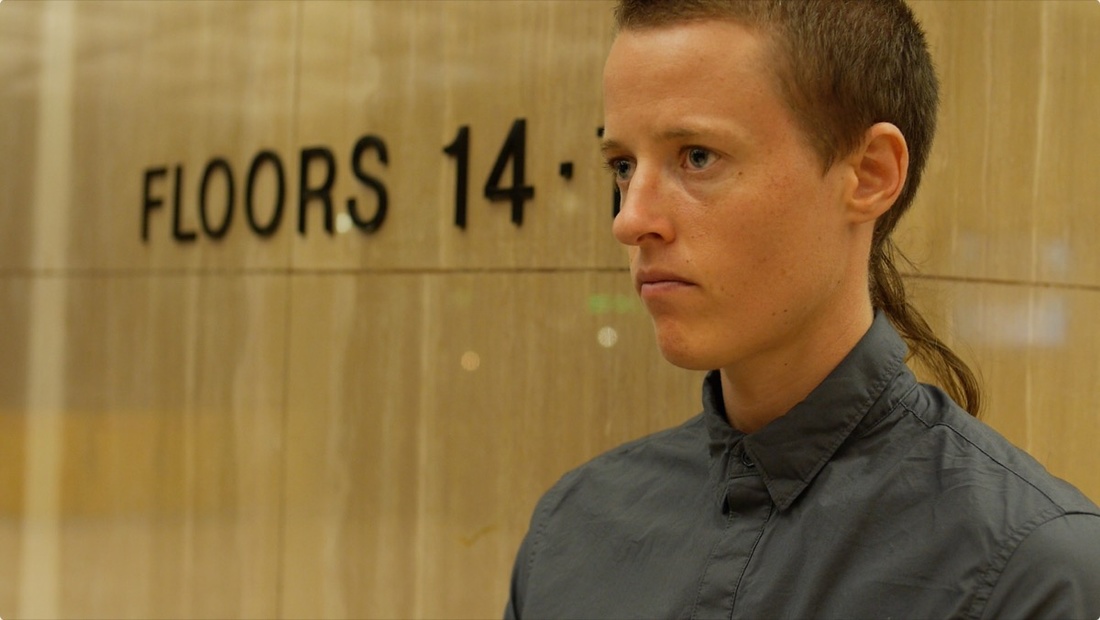 "Two Filmmakers Captured the Process of Dying and Turned It into an Immersive Experience": According to Artsy's Maxwell Williams.

“It is dusk, the light over the north side of the building casting a blue-and-yellow glow, a time best described in L.A. as the magic hour. Below, the city twinkles as cars begin to turn their lights on. In the room, it is quiet. There are 10 or 11 audience members, seated in chairs lining the back of a walk-in closet-sized room. We are there to see ‘End of Life,’ a film by Paweł Wojtasik and John Bruce. We are encouraged to use the lavatory, because the film is meant to be experienced in full. ‘It is in everyone’s best interest to be present’ are the exact words. The film opens with a black screen and chatter—someone discussing the work of Ernie Bushmiller, the funny-paper artist behind the comic strip Nancy. The sound dissolves and an image materializes on the screen: an oceanic horizon. Cut to Ram Dass, the spiritual guru and friend of the 1960s psychedelics advocate Timothy Leary, sitting in a wheelchair, his nose and bald head speckled with sunspots. The camera lingers on Dass, now in his eighties. He opens his mouth to speak and then closes it, clears his throat, rubs his goatee, takes a drink of water. Finally: ‘In our culture, almost everybody is afraid of death,’ he says.” 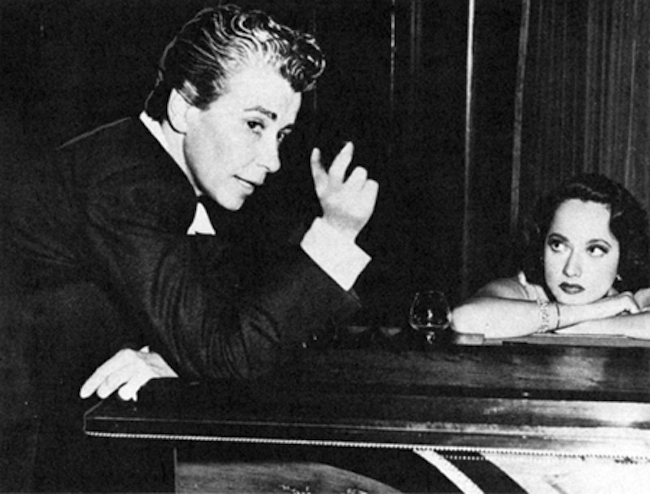 “There I was standing before William DeMille, saying: ‘I think I’d like a job in the movies.’ William DeMille: ‘Where do you think you’d like to start?’ Answer: ‘I might be able to dress sets.’ Question: ‘What is the period of this furniture?’—meaning his office furniture. I did not know the answer, but I’ll never forget it— ‘Francescan.’ He continued: ‘Maybe you’d better look around for a week and talk to my secretary. She’ll show you around the different departments.’ That sounded interesting enough to me. I watched the four companies that were working, particularly that of Cecil DeMille. And I remember making the observation, ‘If one was going to be in this movie business, one should be a director because he was the one who told everyone else what to do. In fact, he was the ‘whole works.’’ However, after I finished a week of observation, William DeMille’s secretary told me that typing scripts would enlighten me to what the film to be was all about. It was the blueprint for the picture. All the departments, including the director’s, were grounded in the script. So I turned up at the end of the week in William DeMille’s office. He asked, ‘Now where do you think you’d like to start?’ I answered, ‘At the bottom.’ He looked penetratingly serious as a schoolteacher might, and then barked, ‘Where do you think the bottom is?’ I meekly answered, ‘Typing scripts.’ ‘For that, I’ll give you a job.’ I was introduced to the head of the typing department. I was told I’d be given the first opening, but I had my doubts. Weeks went by. I took a job in a wholesale coffeehouse, filling orders and working the switchboard. It was through that switchboard that the call came from Ruby Miller, the typing department head. I was making $12.00 a week. I said, ‘What’s the salary?’ ‘Fifteen dollars a week for three months, then $16.50.’ So for $3.00 dollars more a week I accepted the movie job. And that is how I started at Paramount, then called the Famous Players-Lasky Corporation.” 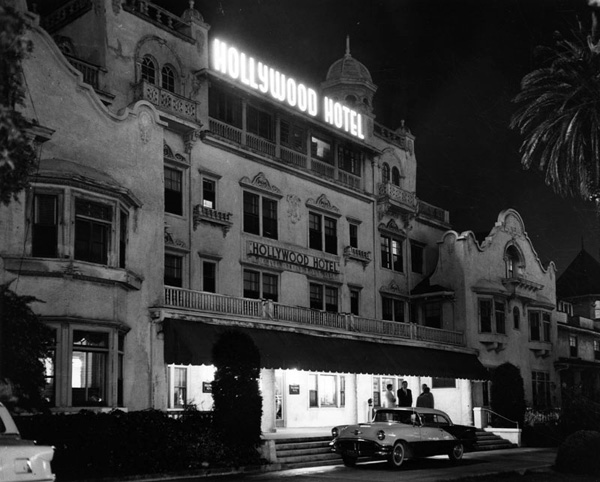 “Today, Hollywood and Highland is synonymous with the frenetic, yet somehow lazy, tourist trap that is Hollywood Boulevard. I cannot be the only Angelino who has spent a sweltering Saturday afternoon ushering visiting relatives through the Hollywood and Highland Center, with its towering ‘Intolerance’-inspired architecture and rather commonplace, overpriced shops. Atop it all is the Dolby Theater, home of the Academy Awards, which often leads visitors to ask incredulously, ‘Wait, movie stars walk through a mall to get to the Oscars? Past the Sephora?’ After a day fighting off filthy Cookie Monsters and shopping at the giant Gap, I have occasionally sat with loved ones in their rooms at the looming Lowes Hollywood Hotel, a 628-room haven of sleek, attainable luxury. At night, Hollywood and Highland becomes a seedier kind of trap, filled with stilettos clicking over the Walk of Fame stars that line the grimy sidewalks. Few know the legend of how these stars came into being. Even fewer are aware that less than 100 years ago, Hollywood and Highland was a bucolic rural paradise, and at its heart was the rambling, genteel Hollywood Hotel.” 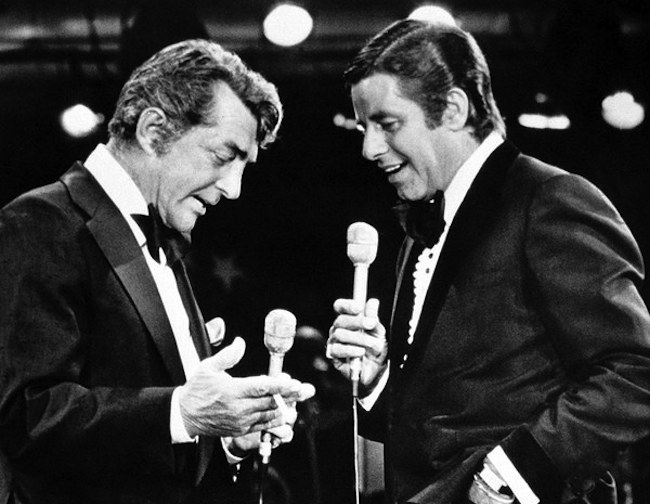 "When Jerry Met Dean—Again, on Live Television": Donald Liebenson reflects on the historic reunion in commemoration of its fortieth anniversary at Vanity Fair.

“In John Ford’s classic ‘The Man Who Shot Liberty Valance,’ a newspaperman ultimately explains to Jimmy Stewart, ‘This is the West, sir; when the legend becomes fact, print the legend.’ Well, this is Vegas, baby, and the facts are legend. Martin, the suave crooner, and Lewis, the frantic tummler, first teamed up in 1946. According to Lewis’s memoir, Dean and Me: A Love Story, when they met, Lewis—nine years Martin’s junior—brashly asked his future partner, ‘You workin’?’ They had a phenomenal 10-year run. They were boffo on radio, television, and in movies and nightclubs. But an insurmountable abyss gradually grew between them—and on July 24, 1956, 10 years to the day of their first appearance as a team, they gave their last nightclub performance at New York’s famed Copacabana (the hottest spot . . . well, you know). Dean’s surprise appearance at the telethon caught Jerry completely off guard. ‘You son of a b—h,’ he can be heard saying, sotto voce, to Frank in the clip, before joking, ‘Shoulda been a Jew that did it.’ And then Frank bows out, and it’s just Jerry and Dean. ‘So, how ya been?’ Jerry begins. ‘You know, it seems like we haven’t seen each other for 20 years,’ Martin replies. Lewis’s response: ‘Well, you know, there was all those rumors about our breaking up—and then when I started the show and you weren’t here, I believed it.’” 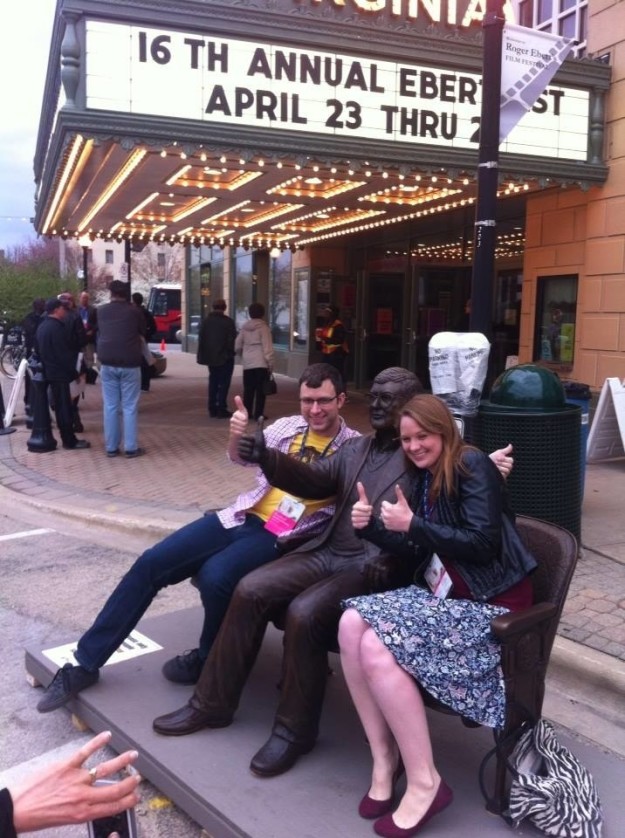 Filmmaker Rachel Berry, whose short film, "Fast Rodney Who Was On His Way Out," was a major highlight at this year's Pens to Lens Gala, offers 15 reasons for why Ebertfest is "the best film festival in Illinois" at BuzzFeed.

Doug Walker (a.k.a. The Nostalgia Critic at ChannelAwesome.com) provides one of his funniest reviews to date by daring to watch "Tentacolino," his third review of an astonishingly bad animated Titanic movie (Walker's reviews of the other two, "The Legend Goes On" and "The Legend of the Titanic," are equally uproarious).