"The negative influence of Coppola's 'The Godfather.'" At The New Yorker, Richard Brody takes the celebrated series down a peg, saying that John Cassavetes did much more to make Hollywood "new."

"If 'Jaws' and 'Star Wars' are the movies that reconfigured Hollywood for a young audience, then the first two 'Godfathers' are the pillars of nostalgia for the so-called 'adult drama'—for the idea that nineteen-seventies America represented an apogee of artistic achievement within the Hollywood system. But the ultimate effect of Francis Ford Coppola’s grand diptych was to do, for adults, the same thing that Spielberg and Lucas would do for kids: Coppola single-handedly, mightily, and enduringly shored up the ruins of familiar but outmoded conventions: performances of a poised dramatic accuracy, images of a burnished, low-light luxuriousness, shots composed with a fluid precision, a script that foregrounds the action to express the story’s strategic, psychological, and political implications. The accomplishment was great; its negative effects endure."

"The big come-on: In a teaser culture, the hints of what’s to come matter more than the events themselves." Writing at The Dissolve, Matt Singer discusses how "the tease" has come to occupy a central role in popular culture.

"Modern comic-book and geek-friendly movies are certainly some of the most tease-friendly genres in cinema, and not just while the credits are rolling. The never-ending battles for truth and justice perpetuate endless numbers of sequels to not only watch, but anticipate. Fans hang on every plot rumor and casting announcement. Entire websites dedicated less to film journalism than film anticipation feed their cravings with an endless churn of cinematic speculation. At the just-wrapped San Diego Comic-Con, the star attractions aren’t movies; they're teases of movies. Fans wait hours or even days just to watch trailers, or sometimes even less than that; Marvel’s preview of 'The Avengers: Age Of Ultron' was nothing more than an elaborate title treatment, with almost no additional information. As its own experience, that's almost worthless. As a tease, it's almost perfect, leaving open infinite avenues for speculation." 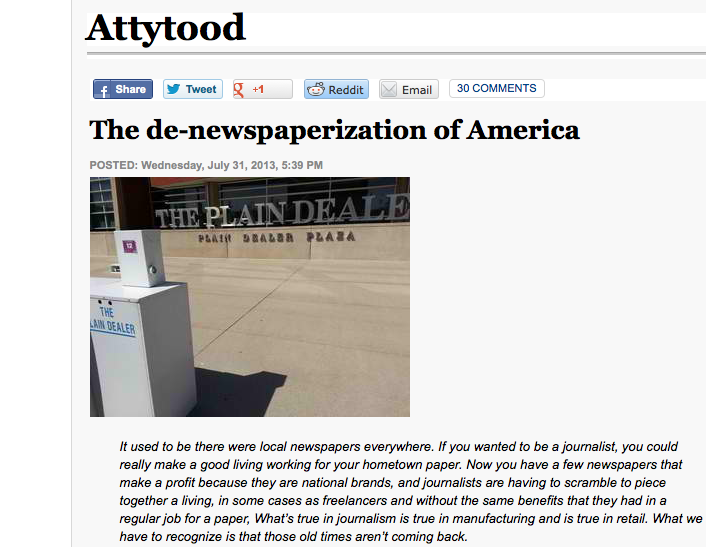 "The de-newspaperization of America." After yesterday's layoffs at the Cleveland Plain Dealer, Will Bunch examines the way the decline in journalism jobs has had a disproportionate effect on industrial cities—and ponders what a lack of reporting would have meant for Amanda Berry, whose kidnapping marked a case in which "the journalists were more aggressive at times than the authorities."

"The de-newspaperization of America is finally catching up with the de-industrialization of America. Newsroom jobs, especially decent paying ones, are vanishing everywhere—thanks to the shrinking number of print readers and the fact that digital advertising can't fully support digital journalism. But the job losses seem to be coming faster—and the effect on the fabric of already struggling communities is far greater—in the rusty, rotting-factory cities of older America."

"Things that look like feminism but aren't." Reviewing some of the commentary written in the wake of Anthony Weiner's latest scandal, Irin Carmon, at MSNBC, says the op-eds should serve as a reminder that "all things written by women are not feminism," and "nor are all things that are written by women in the name of feminism—at least if you define feminism as fighting for the right of women to have equal personhood and participation in society."

"Huma Abedin might not be acting in the way you believe you would if you were married to Weiner, but you are not Abedin, and her choices about whom to marry belong to her and not to you. Neither Abedin nor [Sydney] Leathers are advancing policy that harms women as a class. (Nor is Weiner, for all of the fond fantasies of Republicans who would like to I'm-rubber-you're-glue 'the war on women.')" 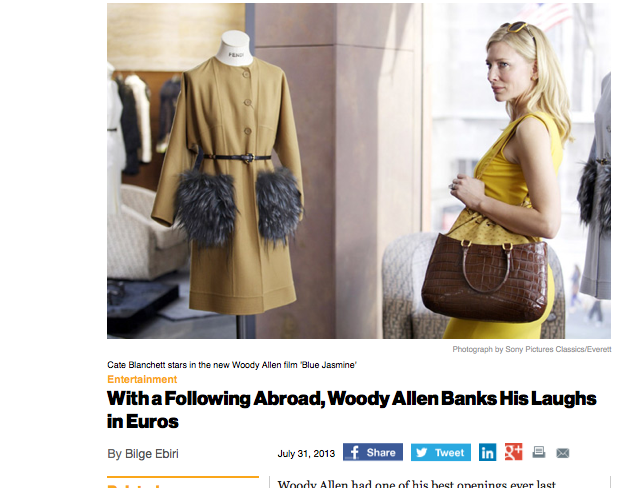 "Allen has accomplished [his international success] over the years by building himself into a recognizable brand overseas, especially in Spain, France, and Italy, which have been among his biggest markets. In a fascinating scholarly article about the way these films are marketed in France, author Frédérique Brisset points out that Allen's name is given a lot more prominence there than it is at home. In France, "Allen's work has almost become," Brisset observes, "a genre by itself." That's one reason why the director has been filming more and more away from his native New York—not just because it's cheaper to shoot abroad, but also because that's where his audience is." 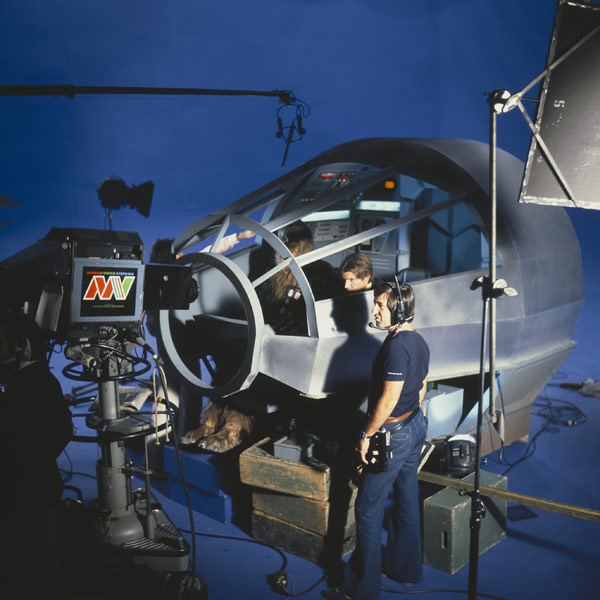 Han Solo and Chewbacca pilot…a model. Image via Wikipedia. Stephen Dowling at the BBC suggests that filmmakers may soon revert to old-fashioned effects work along these lines.

"Siding With the Victim: A Video Essay Series." In a three-part video essay at Press Play, Jed Mayer and Ken Cancelosi take a look at how the trope of "identifying with the hapless" in horror films is one of the things that makes the genre compelling.