1.  "Roger Ebert on Kindness." Gavin Aung's wonderful contribution to the blog Zen Pencils, which illustrates inspirational quotes. Aung's comic is based on an excerpt from Roger Ebert's autobiography Life Itself. Click here to read and look at the whole thing. 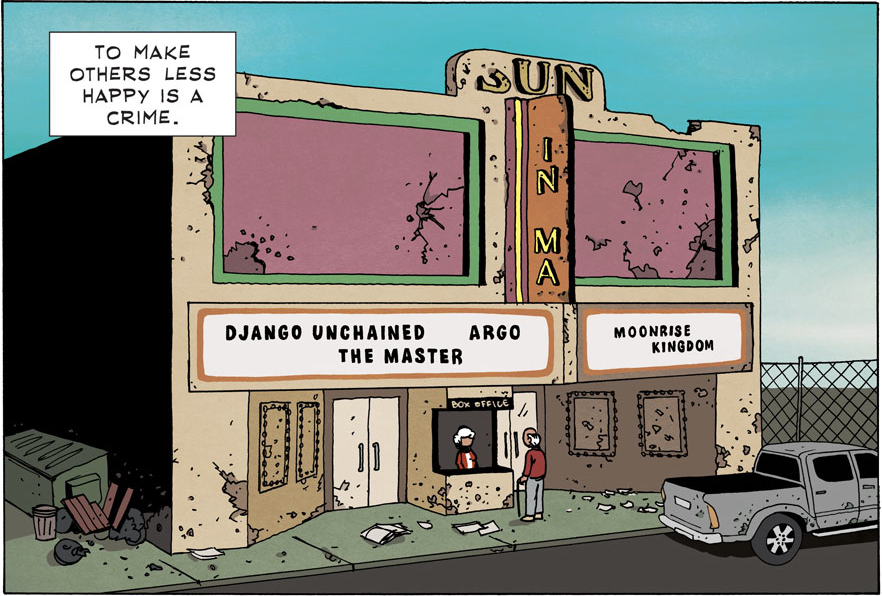 2. The Atlantic is a rare publication that regularly publishes lengthy rebuttals to its own articles. Here's one by Bradford Wilcox: "Unequal, Unfair and Unhappy: The 3 Biggest Myths about Marriage Today." It's an answer to Liza Mundy's Atlantic Monthly cover story "The Gay Guide to Wedded Bliss," which claims that same-sex unions tend to be happier than heterosexual marriages.

"There is only one problem with the dour and dismal portrait of heterosexual marriage painted by Liza Mundy in this month's Atlantic cover story. It's wrong. In her bleak rendering, contemporary marriage comes across as unequal, unfair, and unhappy to today's wives. ... Of course, it's true that some marriages are unequal and unfair, leaving a minority of wives (and husbands) unhappy. And most husbands and wives experience moments or even periods of frustration with their work-family arrangements. Nevertheless, the big picture for marriage in America—for those Americans fortunate enough to have tied the knot—is markedly more rosy than Mundy's portrait would suggest."

3. "A Movie to Watch Out For: Destination Planet Negro." Sergio of Shadow and Act calls our attention to the newest feature by Kevin Willmott, the excellent director of the fake documentary The Confederate States of America, which you really must see if you haven't already.

"The premise itself is very original: a group of black leaders, including even W.E.B DuBois, during the 1930’s, gather together for a secret meeting to discuss the 'Negro Problem' in America. They decide that the only real solution is for black people to not only leave America, but this planet altogether, and, with the help of George Washington Carver, build a rocket ship to take an exploratory group to Mars, to check out the possibility of such a bold undertaking. The first 30 minutes of the film are done in a campy 1950’s black and white sci-fi style, with appropriately cheesy music and special effects, while the scenes in present day America are shot in color and directed in a more natural, contemporary style, which is all even more impressive considering that, because of the film’s restrictive budget, it took Willmott an entire year to shoot the film, filming only a few scenes at a time."

4. "My direct experience of progressive rock." Wherein Glenn Kenny of Some Came Running takes issue with Rob Sheffield's New York Times review of Yes is the Answer -- And Other Prog Rock Tales," particularly the author's assertion that prog rock practitioners and aficionados didn't get laid.

"In his kicker, Sheffield states 'oblivion seems entirely suited to prog, which at its best functioned as a shelter from school, from sex, from the frightening adult world.' Even without parsing too closely, this seems a curious stone to have been thrown by the author of Talking To Girls About Duran Duran."

5. "Using Psychology and Pre-Human History to Explain why Arrested Development doesn't have a laugh track." J.F. Sargent of Film School Rejects proposes a very simple theory for why some sitcoms have laugh tracks and others don't.

"Free Will in Kubrick's The Shining." Filmmaker and teacher Drew Morton, who goes by @thecinemadoctor on Twitter, shows how the compositions, camera movements and production design of Stanley Kubrick's 1980 horror film express certain attitudes about how much control the characters have over their destinies.