"A Great Actor, a Better Man." A reminiscence by Matt Zoller Seitz, the editor of RogerEbert.com and the TV critic of New York Magazine, about getting to know the late James Gandolfini while covering The Sopranos for the paper that Tony picked up at the end of his driveway. See also: Star-Ledger columnist Mark DiIonno on going to Rutgers University with Gandolfini, and giving him that distinctive dent in his forehead. And: Links to all of the Star-Ledger's coverage of the actor's death, plus archival pieces about The Sopranos as seen from the POV of New Jersey's largest daily. Also: "No evidence of substance abuse or foul play, says friend" (CBS Interactive);  "Autopsy confirms heart attack killed Sopranos star" (Chicago Tribune wire service reports).
Advertisement

"Anybody who had even the slightest contact with Gandolfini will testify to what a great guy he was, how full of life he was, how extraordinary he made other people feel. Yes, absolutely, he had problems – with drink, with drugs, with women, probably with lots of other things, for all we know – but so does everybody, to one degree or another. But whether he was feeling well or poorly, or living smartly or stupidly, there was always something about the guy that you wanted to embrace."

"James Gandolfini of The Sopranos: An Appreciation." By Maureen Ryan, for The Huffington Post.  See also: "The Great Gandolfini," by Tom Carson, for The American Prospect. Plus: Seitz's Star-Ledger TV beat partner Alan Sepinwall on Gandolfini's genius; "Villain, Hero, Sex Symbol and Slob," by Robert Lloyd of The LA Times.

"There was the jokester Tony, the light-hearted big guy whose eyes were often amused and who displayed impeccable comic timing, as if that's an easy thing to deploy. There was mob boss Tony, the man who was capable of an astonishing range of brutal acts, some spontaneous, some quietly purposeful. This was a man capable of making other powerful men sit down, shut up and do his bidding just with a certain gleam in his eye. There was Tony the confused but doting father, Tony the frustrated but occasionally appreciative spouse, Tony the narcissistic liar and serial cheater, Tony the shrewd, calculating businessman. He was a man out of time, an old-fashioned New Jersey guy who thought he "came in at the end" of the good times. He was a man who, despite his many limitations, had moments of compassion for everyone from his son to his shrink to a befuddled FBI agent. All these different Tony Sopranos made sense together because they were played by Gandolfini." 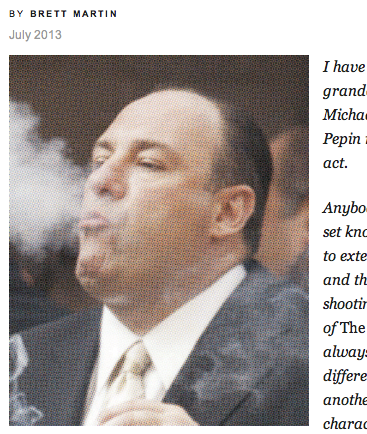 "One cold winter's evening in January 2002, Tony Soprano went missing and a small portion of the universe ground to a halt. It was not completely out of the blue. Ever since The Sopranos had debuted in 1999, turning Tony—anxiety-prone dad, New Jersey mobster, suburban seeker of meaning—into a millennial pop-culture icon, the character's frustration, volatility, and anger had often been indistinguishable from those qualities of James Gandolfini, the actor who brought them to life. It was a punishing role, requiring not only vast amounts of nightly memorization and long days under hot lights, but also a daily descent into Tony's psyche—at the best of times, a worrisome place to dwell; at the worst, ugly, violent, and sociopathic."
Advertisement 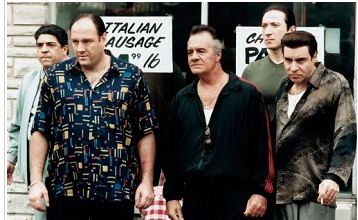 "James Gandolfini, R.I.P.: How Tony Soprano Changed American Culture." For Reason Magazine, Nick Gillespie writes about The Sopranos' portrayal of an America in which ethnic pride mattered less and less in the face of creeping suburbanization, homogenization and freakin' Starbucks.

"Tony in particular represents a character who draws immense power from his ethnic heritage - not just a cultural identity in terms of tastes in clothing and food, but a line of work that is inextricably linked to his being Italian American. Yet even as that identity confers great power on Tony, it paralyzes him and his family from actually moving into anything like a sustainable future. Despite being able to squeeze out a living by using brute force, the show makes clear that in the long run, it's over for the Mob - in one telling incident, two of Tony's goombahs try to shake down a new Starbucks franchise for protection money. They're told that since all decisions are made by corporate bean-counters in Seattle, there's no way the manager can give them anything. Even the straws and coffee stirrers are accounted for, the manager explains. The disappointed gangsters walk out of the franchise muttering that the small independent guy can no longer make a living. At the series' start, Tony had hoped that his children would not follow him into organized crime. By the ambiguous end of the series, that seems unlikely, even as it consigns his kids - with the non-ethnic names Meadow and A.J. - to a dark life."

"Now, James Gandolfini, who of course isn't Tony Soprano but who inhabited that icon of the suburbs of God's Little Acre so fully that, for the natives, it's as though one of the blue-dinosaur ship-loaders of Kearny has gone missing. Or all of them. Everyone knew at least one kid with a dad like Tony, a dad with jewelry and unspecified job duties who appeared in a robe, gingerly, at 4 PM and called us 'hon' and 'chief.' We recognized Tony immediately."

Vanity Fair's notorious (for its nudity) Sopranos cover. From 2007. 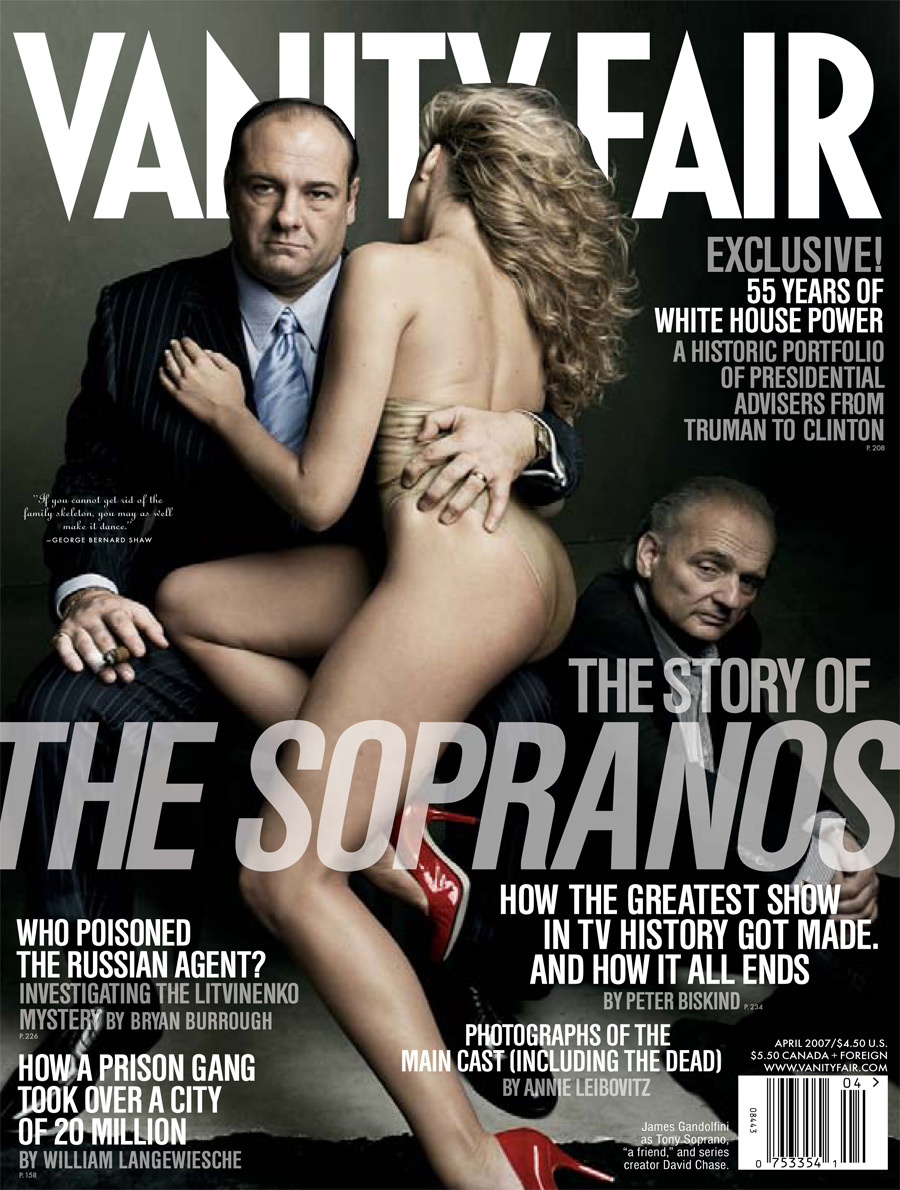 James Gandolfini talks about being scared on "Sesame Street."