"Ya dig? Abel Ferrara on 'Ms. 45' and '70s New York": A great 2013 interview conducted by our Simon Abrams for The Village Voice. Related: Abrams' new interview with Ferrara at The Dissolve, where the director explains why he is "angry about 'Welcome to New York.'"

“You've also previously said that the way people see movies now is so drastically different from the way you're accustomed to, but you don't seem that threatened by that difference. [Ferrara:] ‘It's hard to tell, man. You see these kids watching stories on their telephones, and I know that's how they grew up on it. They grew up looking at computers, and I'm not arguing with that. Because the stories aren't going to change. What we're bringing to the table, our ability, our technique, our understanding of our lives has gotten better. But otherwise, the power has got to come through. I saw ‘2001’ in New York on a giant screen, 70mm, and in stereo sound, the full works — blew my f—kin' mind. Twenty years later, I was in a f—king snowstorm in a cabin somewhere in Vermont. I saw that on a 12-inch black-and-white monitor with a tiny speaker. It was mind-blowing! [laughs] F—kin' mind-blowing both ways. Seeing a movie on the big screen is a communal experience that you cannot — when I show my films, I always tell them, even if they've seen it before, ‘See it with this other cat.’ Because film's are made in the communal way. Films aren't usually made by a single person.’” 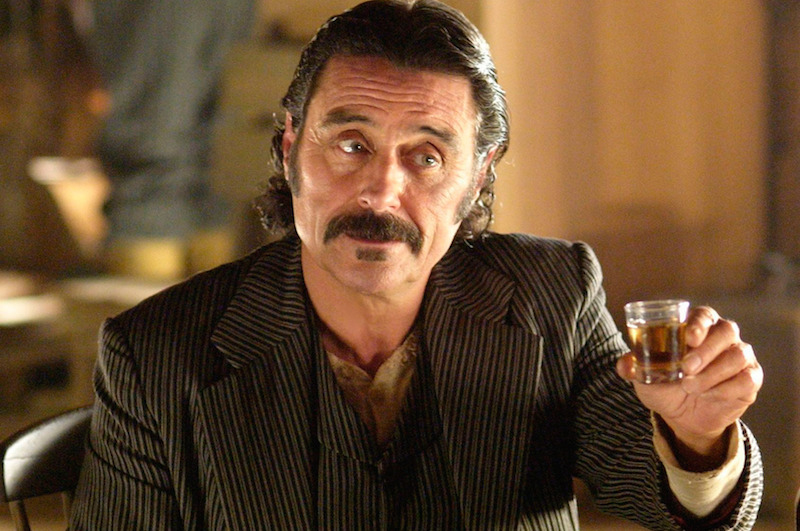 “Let's make haste to address the matter at hand: This fancy big-city artist boyfriend of yours, always off somewheres on a tear with his married ladyfriend, this hapless ne'er-do-well of violent temper, oversensitive to the merest slight from your tongue, yet armed with little respect for your particular sensitivities nonetheless? This supposedly honorable creator of installations and performances for other big-city folk, them with similar talents for screwing up their lives flatter than hammered s—t and then proclaiming themselves daring and adventuresome all the same? This giant baby prone to shamelessly soiling himself with clocklike precision, every hour on the hour, not only by failing to resist lying down with a faithless wife of another man and failing to resist social drinking with said faithless wife, but also by failing to mention the existence of a younger lady lover whilst in the company of said faithless wife? This unfathomable infant who then whines when he doesn't get what he wants when he wants it, yet cares not a whit about what his ladyfriend wants and don't want? This man is a common toad, nothing more or less, from his inability to treat you, his ladyfriend, with some faint semblance of respect and consideration and the like to his inability to make out even the dimmest outlines of good and evil, deeply lacking as he is in the rusty old secondhand moral-compass department. This c—ksucker needs to get told to f—k himself, with conviction and with finality, at long last.” 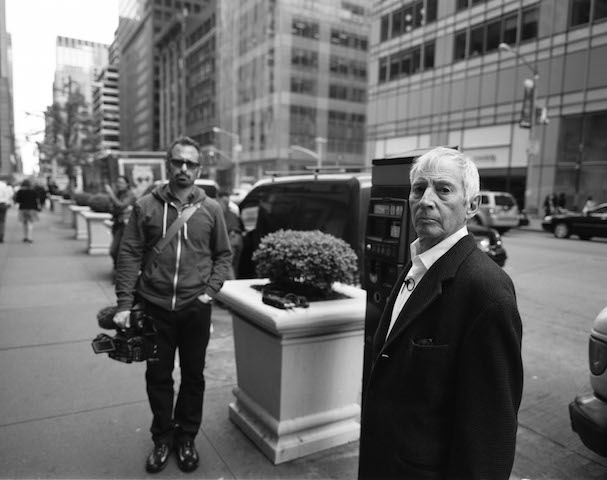 "Why Andrew Jarecki's 'The Jinx' Could be Very, Very Bad for Documentaries": An impassioned piece by Indiewire's Sam Adams.

“As Kate Aurthur's extensive reporting indicates, that ‘jaw-dropping conclusion’ was the result of no small amount of directorial trickery. As I've written before, that might not be such a big deal were Jarecki operating primarily as a documentary storyteller, but once he claims the title of investigative journalist — to say nothing of the angel of justice as which he eventually presents himself — playing fast and loose with the truth is no longer a minor offense. Badass Digest's Devin Faraci throws up his hands at such piddling details, citing Werner Herzog's oft-cited (and nearly as oft misapplied) distinction between ‘ecstatic truth’ and ‘the truth of accountants,’ but the question of Durst's guilt or innocence is not a ‘larger truth.’ It is a matter of specifics, the classic trinity of motive, means and opportunity. The broader issues of who Durst is — how witnessing his mother's possible suicide at a young age might have affected him (or if indeed he witnessed it at all); what drove him to kill, and then to constantly flirt with capture — are swept aside in favor of two simple questions: Did he do it, and can Andrew Jarecki catch him out?” 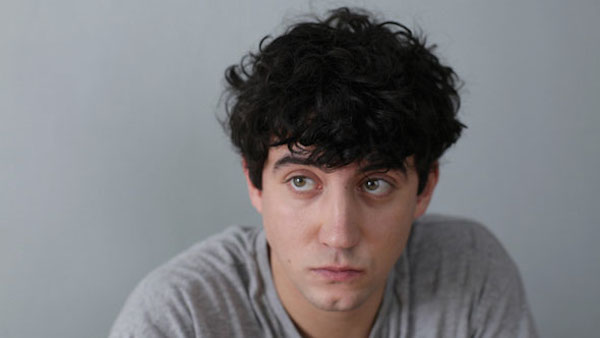 "'Life Just Is' Is Just Lovely": At Indie Outlook, I recommend Alex Barrett's perceptive indie, which is available in the U.S. and Canada starting today, courtesy of its distribution partner, Yekra.

“Another insightful subplot revolves around Jay (Jayne Wisener) and her new, thirtysomething boyfriend with the oddly boyish name of Bobby (Paul Nicholls). Pete dubs him as ‘shallow’ after their first encounter, when Bobby acknowledges the Kierkegaard book he’s reading. Bobby recalls his own memory of encountering the Danish philosopher’s work, before promptly dismissing it, saying, ‘I was young at the time,’ thus inadvertently dating himself. The disconnect between him and Jay grows quickly apparent, as she drifts further and further from his advances. Finally, he gives up and leaves her sitting alone, as the camera closes in on her face. She weeps softly and then grows silent, as if coming to terms with the fact that the break-up, while painful, was necessary (Wisener’s work here is sublime). It’s in these silences where the film is at its most intriguing. No attempt is made at underlining the emotional texture of these moments with an obtrusive score or unnecessary dialogue. When Tom’s girlfriend, Claire (Fiona Ryan), sits on the couch, waiting to apologize for kissing a guy during a party the night before, the camera simply sits with her for an excruciatingly protracted beat. No words are needed, and Barrett’s debut feature script wisely restrains itself.”

"'Conflict is not our only dance step.'—Joan Scheckel explains The Technique": At Film Independent, Jennifer Kushner has a wonderful conversation with the creator of an acclaimed and influential filmmaking workshop.

“Stories always need to be responsive to their time. That is what a story is. A story is a context for meaning. Ever since I was a little girl I didn’t want to tell stories that had already been told. I wanted to tell stories that helped me understand the world I was living in—am living in—in a very present way. I’m not saying anything is wrong with history, but I have to be able to step out into my life today as a human being, as a woman in the 21st century, as a person, and engage with what’s going on on the planet, right now. A story is an ordeal, people are in the middle of ordeals everyday, and what those ordeals are are constantly changing along with the meaning that we derive from them. The evolution of the human mind, of consciousness is held in story. In our own lives, if we tell ourselves the same story over and over and over again, then that’s pretty much it. We have to tell new stories as we engage more profoundly with meaning. That’s the function of art, as I perceive it. If I want to fly to the moon, if I want to fly to Saturn, if I want to engage with outer space, I cannot get there in a car. I have to come up with a new technology to get me from here to there. And so, we can’t continue, just as in Stanislavski’s time he couldn’t get on with the stories that they were creating in Russia at that time—with Chekhov and Moscow Art Theater—with the tools of Delsarte or the tools of Commedia dell’arte or the tools of whatever came before. You have to come up with a tool that represents your time. And at a certain point, because I was an opera singer first, and I was always engaging with the structure of music and how it reflected its time, I started to feel like the technical tools I had to make my own work, to tell my own stories, direct, act, to sing—all the art I was engaged with—were failing me, really because they were leading me to things that could only exist where there was conflict.” 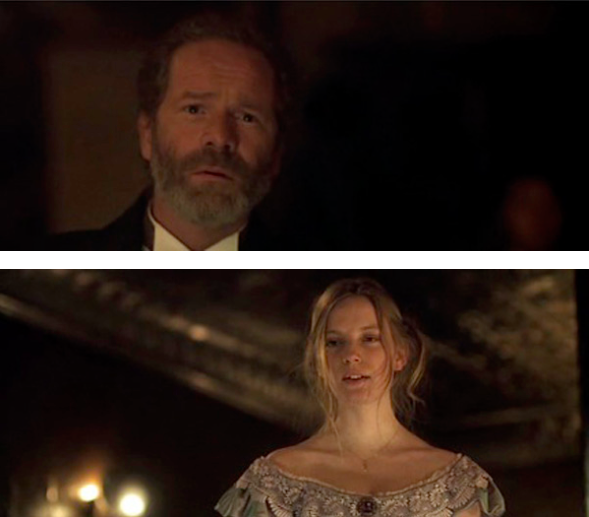 At Reverse Shot, Mark Asch writes an essential piece "on 'The Claim,' pan-and-scan, and the space beyond the TV screen."

Tamara Chambers, a hilarious performer best known for her work on "Nostalgia Critic," responds to online harassers in this excellent video on TouchVision produced by Beth Elderkin and Danny Johnson.