"Lizzie Velasquez Movie Premieres at SXSW; 'A Brave Heart' Shows Struggle to Overcome Bullying": At International Business Times, Monica Castillo reports on the premiere of Sara Bordo's documentary. From the archives: In 2013, Velasquez delivered a powerful TED talk, "How Do YOU Define Yourself."

“Now active in anti-bullying campaigns and pushing for stronger federal legislation against bullying, Velasquez has come out on top. Her words of inspiration posted on her YouTube channel have touched people around the world. ‘A Brave Heart: The Lizzie Velasquez Story’ is not only a testament to Velasquez’s survival but also to her kindness and genuine desire to help others in her situation. ‘People are hungry for a hero,’ Bordo said. ‘Her story has to do with survival and getting to the other side of a really, really pervasive issue [of] bullying. Everyone’s so used to hearing about stories that yield victims. Lizzie’s is the one story that we thought we could help elevate about a hero.’ Ahead of her big hometown premiere at South by Southwest, Velasquez admitted watching the film was going to be an emotional experience for her. ‘I’m going to be crying the entire time. It’s unreal,’ she said about her time at SXSW. ‘It’s like a dream I didn’t know I had.’ Her parents, who had only seen a part of the movie before the big premiere at the historic Paramount Theatre, shared her excitement. ‘It’s amazing. Just to see the [movie] put together is inspiring. To see her accomplish all of this is inspiring,’ Velasquez’s mom Rita said. In the jump from YouTube vlogging to documentary filming, the Velasquez family said they felt little difference. ‘They were very good about letting us become comfortable with what we wanted. We were very honest about putting her out there,’ Rita assured. Lupe, Velasquez's father, said the movie was made with ‘a lot of love and trust’ between the family and filmmakers.” 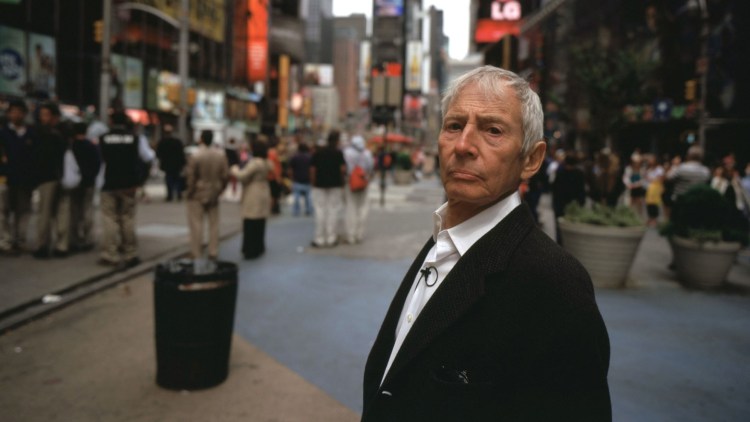 "Calm Down, Everyone. Nobody Spoiled 'The Jinx.'": Grantland's Kevin Lincoln offers his take on the "absurdity" of the spoiler debate centering on Andrew Jarecki's HBO documentary, "The Jinx: The Life and Deaths of Robert Durst." Related: Steven Zeitchik and Saba Hamedy of The Los Angeles Times explore how the film "marks documentaries' big shift in real time." From the archives: A fascinating 2002 article on Durst, "The Fugitive Heir," penned by Vanity Fair's Ned Zeman.

“If you or someone you love has participated in the spoiler “debate” around The Jinx, step back for a second and consider the absurdity of what you’re involved in. There is no debate. ‘The Jinx’ cannot be spoiled. It isn’t ‘Game of Thrones;’ it’s a documentary investigation that may have brought about the arrest of a man in the investigation of the killing of a woman. There’s no other side to this conversation, no standard for revealing that information, and it belongs on a CNN scroll and the front page of the Times and in Daily Beast email blasts, insofar as any piece of news related to a high-profile murder investigation belongs in those places. But the absurdity of this debate existing in the first place illustrates something about our culture: Our relationship toward television has grown unruly. There is a tremendous arrogance to the belief that ‘The Jinx’ can be spoiled. It implies a possessiveness toward the story; it suggests that the consumption of Durst’s narrative belongs to the viewer in some way. It’s a confusion inspired by our relationship to art, which depends on an audience: Without an observer, art (and, more loosely, entertainment) is missing a significant part of its nature. Art requires a viewer to be activated, and its impact doesn’t exist otherwise. Lacking us, ‘Game of Thrones’ would be a weird expensive game for its directors and writers and set designers and dragon CGI-ers and the guy who plays the guy who [REDACTED] the other guy’s [REDACTED]. When the audience is added in, it becomes a fully realized piece of narrative.” 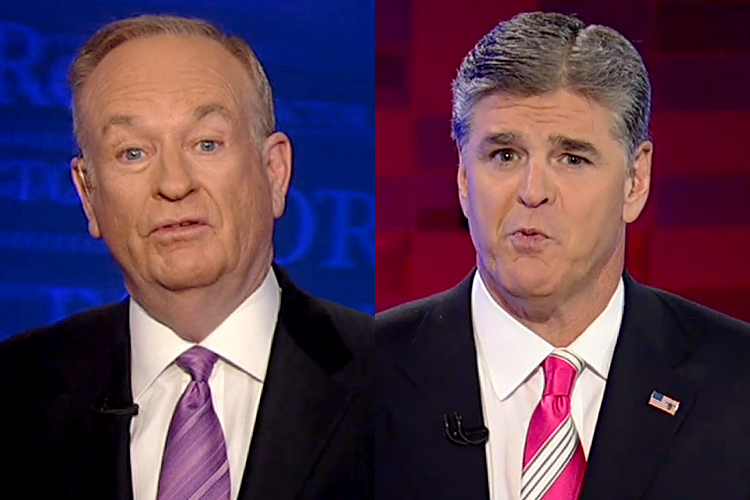 "How did my fellow Irish-Americans get so disgusting?": As pondered by Salon film critic Andrew O'Hehir.

“Over the course of the last century the bulk of the Irish-American population drifted rightward through the Democratic Party and then out the other side into Archie Bunker-land. A key constituency of the New Deal coalition became, 40 years later, a key constituency of the Reagan revolution. But throughout that period there was always a countervailing social-justice tendency in Irish-American life, the tendency of the antiwar activist brothers Daniel and Philip Berrigan (quite likely the only Jesuit priests ever to make the FBI’s most-wanted list), or of 1952 left-wing presidential candidate Vincent Hallinan and his firebrand San Francisco family. This was the tradition of the radical Vatican II priests, nuns and theologians, who kept many of us from abandoning the Church altogether, and of the 1968 reawakening of Robert F. Kennedy and the subsequent career of his brother Teddy. Without exception, those people started from an understanding of their own cultural and national history. They began with Irish nationalist or republican politics, and moved from there to consider how Ireland’s story fit into a worldwide pattern that transcended the specific racial paranoia of the United States. Of course Irish history did not end in 1998, and the current situation in that country – a land of immigrants for the first time in its modern history – is exceptionally interesting. But Ireland is no longer a divisive and charismatic ‘issue,’ capable of galvanizing people who live thousands of miles away. With Irish-American identity now split between an optional lifestyle accessory and a bunch of unappealing right-wing guys yelling at us, its social-justice component has evaporated as well.” 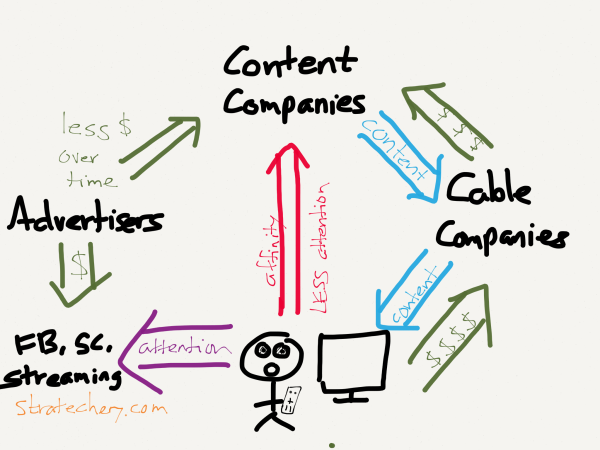 "The Changing—and Unchanging—Structure of TV": Stratechery's Ben Thompson expands on this theory that "Cable TV is socialism that works."

“Over the ensuing years content companies realized that the reason consumers paid cable companies was because they wanted access to the creator’s content (like the aforementioned NFL deal); that meant content companies could make the cable companies pay them ever increasing affiliate fees for that content. Even better, if multiple channels banded together, the resultant conglomerates – Viacom, NBCUniversal, Disney, etc. – could compel the cable companies to pay affiliate fees for all their channels, popular or not. And best of all, it was the cable companies who had to deal with consumers angry that their (TV-only) cable bills were rising from around $22 in 1995 to $54 in 2010.Poor cable companies…well, not so poor. The cable companies weren’t exactly on the road to the poor house thanks to their natural monopoly. Cable TV was originally called ‘Community Antenna Television’ as its purpose was providing access to broadcast TV for communities unable to receive strong over-the-air signals, but over time, particularly with the rise of multi-unit housing, even communities with strong broadcast signals saw the need for cable systems and contracted with private companies to build out the physical infrastructure. These companies didn’t just get to leverage local governments’ unique powers such as eminent domain, but they also retained control of the lines themselves, eventually adding new cable-only stations in addition to the broadcast networks. Over time various alternatives have arisen, including TV delivered over DSL and satellite, but by and large the cable companies have had significant pricing power.” 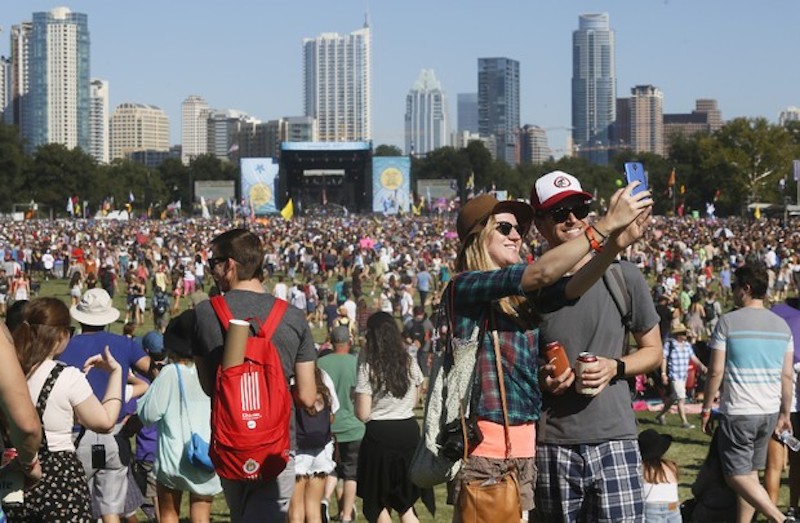 "Here's What's Ruining Austin (and It's Not SXSW)": CityLab's Kriston Capps argues that Austin has no plan for handling its overpopulation problems.

“According to a March report on population trends from the Census, the Lone Star State's capital city saw the highest growth of any major U.S. city, bar none. Between 2010 and 2013, the population of Austin grew 12.0 percent—a surge that outstrips the growth of cities anywhere else in the country. Among the top 25 most populous U.S. cities, Charlotte came in after Austin with 8.4 percent growth, a distant second place.That's a five-alarm population boom. And the city came to it honestly, for the most part, by migration. Lured by jobs in the tech, government, and education sectors—plus a high quality of life marked by abundant live music and delicious breakfast tacos—tens of thousands of people made their homes in Austin in recent years. While it's true that Austin grew slightly in size (as in geographic area) between 2010 and 2013, annexation accounted for about one-fifth of the population growth over that time. For Austin, the recent growth spurt was more of the same. Over the course of the 2000s, the city's population increased a staggering 37 percent; as of 2013, according to the Austin Chamber of Commerce, 7.5 percent of the city's residents lived somewhere else just one year earlier. The population stands to reach 1 million by 2025. Growth alone is hardly the worst thing that can happen to a city (unless your mission is to Keep Austin Weird). But growth in Austin has not been met by an attendant measure of infrastructure improvements, especially with regard to zoning and transportation. In fact, while the population keeps ticking up in the Armadillo, public transportation figures are dwindling.” 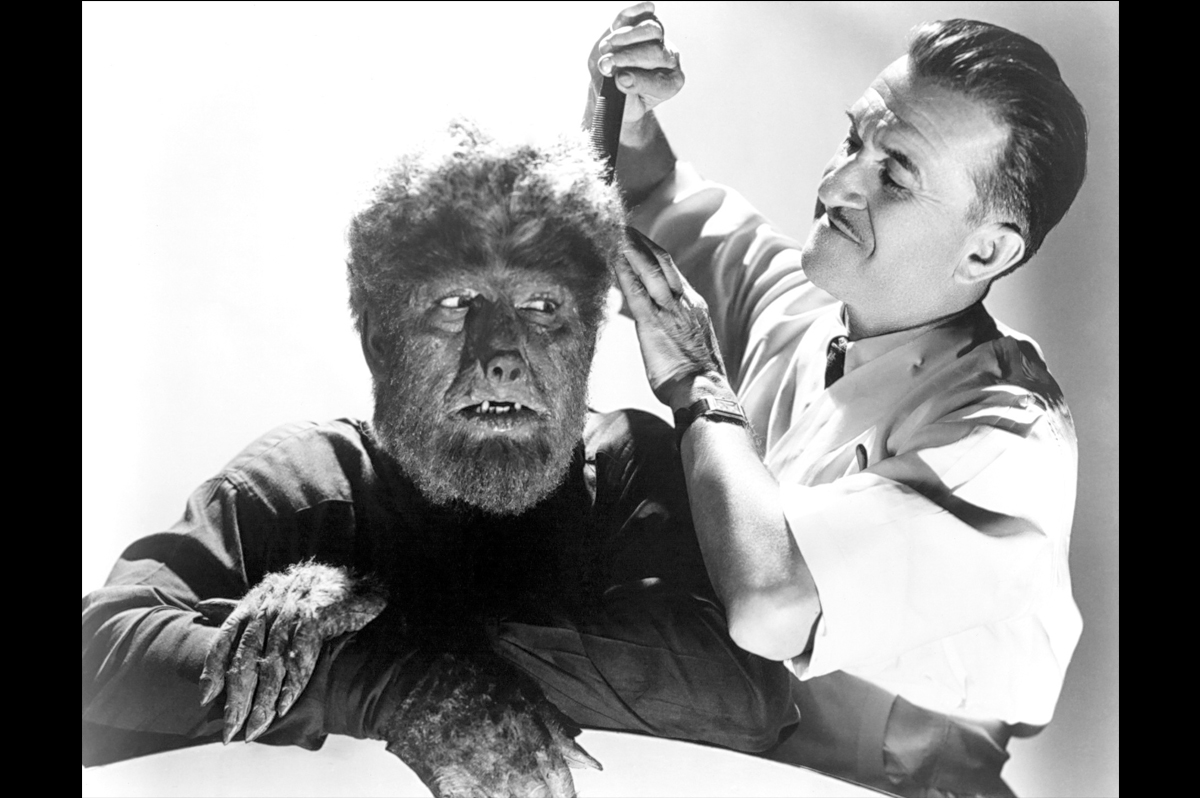 Cocoon Central Dance Team (the exceptionally funny trio of Tallie Medel, Sunita Mani and Eleanore Pienta) all try landing at the same time. It does not go well.