“‘Breaks’ or ‘breakbeats’ first emerged in the formative days of the early 1970s, when a DJ in the Bronx, New York named Kool Herc popularized a sound based around the hard funk drums of James Brown. Herc kept the dancefloor jumping by isolating parts of the records with the ‘breakdown’ —typically in the form of a percussion solo. Since these sections would always generate the most excitement from the dancers, why not continue the energy using two copies of the record? Herc’s cutting-edge practice of extending the break led to the emergence of ‘break boys’ (aka b-boys), who would take the opportunity to showcase their best dance moves during these passages, hence the term ‘break dancing.’ This brilliantly effective DJ technique continued to evolve, as pioneers such as Afrika Bambaataa drew a big following with obscure, funky records that no one else thought to play. Grandmaster Flash mastered the technical aspects of the form, advancing the art of playing the same section of a song endlessly on two turntables—allowing MCs to keep the crowd entertained by chanting phrases over the beats. This vocal party-rocking eventually morphed into what we now consider rapping. Once hip-hop was released on vinyl in 1979, breakbeats were replaced by studio bands, who would reinterpret popular disco grooves to provide backing tracks for rappers. But in 1983, everything changed when Run-DMC and Larry Smith released ‘Sucker MC’s,’ ushering in the era of the electronic drum machine.” 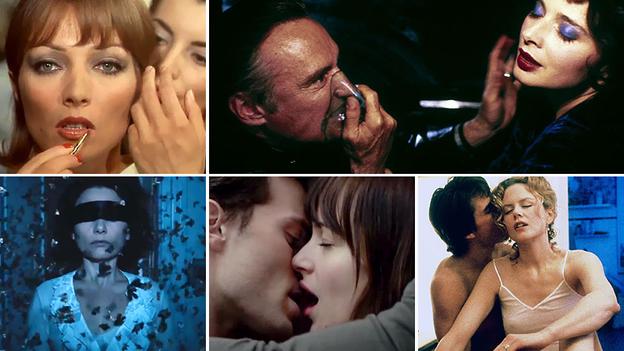 "Can sexual fantasy be filmed?": A provocative piece from BBC's Lucy Scholes, exploring films such as Peter Strickland's "The Duke of Burgundy."

“The ‘primary function of phantasy,’ argue psychoanalytic theorists Jean Laplanche and Jean-Bertrand Pontalis, is ‘to be the setting for desire.’ Every film is a fantasy – the stage-set for the desire of the characters as well as that of the audience. To think of the cinematic spectator as voyeur has become de rigueur. But Laura Mulvey’s pioneering essay on the gaze Visual Pleasure and Narrative Cinema (1975) offers a more complex analysis of the roles in play. ‘Among other things,’ she explains, ‘the position of the spectators in the cinema is blatantly one of repression of their exhibitionism and projection of the repressed desire into the performer.’ ‘The Duke of Burgundy’ re-enacts this ambiguity by first offering up the narrative as Cynthia’s fantasy, before revealing that actually it is Evelyn who’s in control. Strickland’s film is a piece full of cinematic echoes – from Buñuel’s ‘Belle du Jour’ (1967), through Claude Chabrol’s ‘Les Biches’ (1968), Just Jaeckin’s ‘Emmanuelle’ (1974), and Lynch’s ‘Blue Velvet’ (1986), to name but a few – but in particular it recalls Kubrick’s final, hugely undervalued work ‘Eyes Wide Shut’ (1999), a film that was decried for not being as sexy as it promised. Where ‘Fifty Shades’ fails is in the cut-and-dry portrayal of a sexual tastes and relationships. It’s explicit – perhaps not strictly pornographic, but it dwells in the same territory: that of the unerotic, the mechanically sexual. We’ve learnt to embrace the concept of sexuality itself as multi-faceted, rather than something strictly black and white, but for films that explore the subject to be convincing, they need to embrace the same limitless potential.” 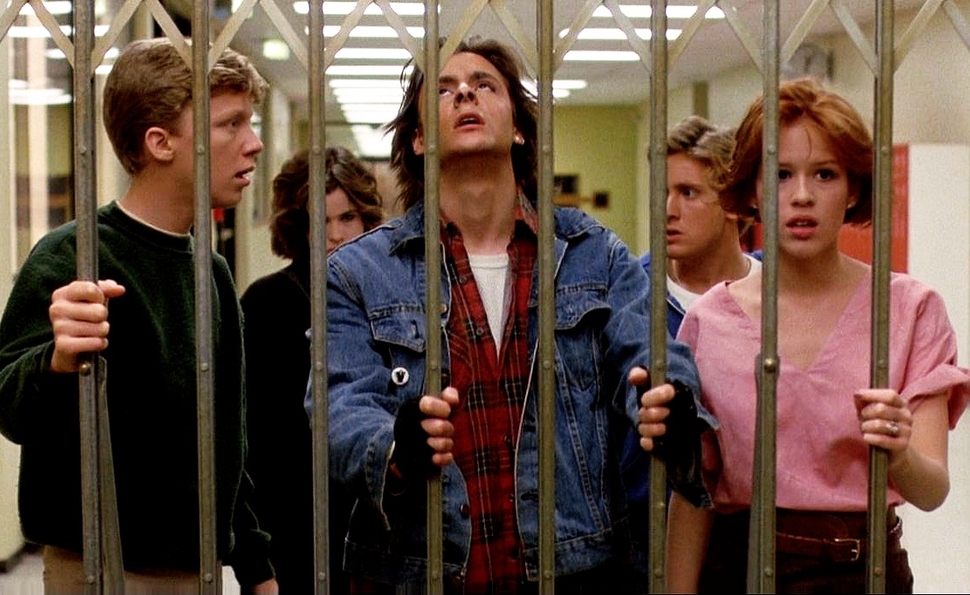 "The adult sympathies of 'The Breakfast Club'": The Dissolve's Jen Chaney reflects on how John Hughes's classic will always "feel like a teenager."

“For the cluster of kids born in the shadow of the Baby Boomers, and later demographically overshadowed again by the millennials, no teen-movie anthem ever expressed our feelings of cultural neglect more effectively than that Simple Minds track that blasts from the speakers the minute ‘The Breakfast Club’ begins. We aren’t Generation X. We’re Generation ‘Don’t You (Forget About Me).’ Though it’s worth noting that African-American, Latino, and other non-Caucasians, who were absent entirely from ‘The Breakfast Club,’ and just as under-represented in Hughes’ other teen offerings, may not feel the same connection to this movie. That’s another thing ‘The Breakfast Club’ shares with high school: Even a movie that aims to speak for everyone of a certain age will inevitably make someone feel left out.Regardless, those of us who grew up with ‘The Breakfast Club’ aren’t kids anymore. We’ve grown up, gotten jobs, become parents. Some of us may not even use the term “neo-maxi-zoom-dweebie” on a regular basis anymore. (Some of us.) It’s only natural for us to look at ‘The Breakfast Club’ now and empathize more with the adults than we used to, perhaps even to notice that Hughes’ portrayal of grown-ups here is more nuanced than it initially seemed.” 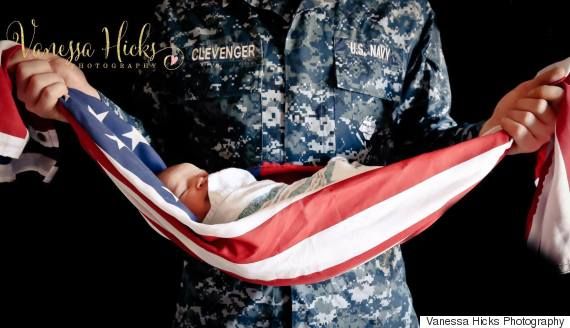 "Is American Patriotism Getting Out of Hand?": David Niose of Psychology Today argues that patriotism "shouldn't be hostile, divisive and uninformed."

“The American patriotic impulse was on display last week as a controversy erupted over a photo, shown above, of a baby cradled in a flag. The venom of so-called patriots permeated the blogosphere and social media, as photographer Vanessa Hicks was on the receiving end of intense vitriol. For depicting a baby wrapped in the red, white, and blue, Hicks was called ‘disgraceful’ and even told that she should kill herself. Hicks, who happens to be a veteran, fended off the cyber bullying and gained many supporters in the process, with many agreeing that the photo was indeed patriotic (not to mention cute). The father of the baby is a military man, Hicks pointed out, as she rebuffed the notion that the photo should be considered ‘desecration’ of the flag. Nevertheless, the scrutiny and criticism continued. ‘Is this photo unpatriotic?’ asked CNN and just about every other major media outlet, making it one of the top stories in the week’s news cycle. The real question here, however, should be why a controversy erupted at all. Even if some people didn't like the photo, surely nobody could ascribe bad intentions to the photographer. The very fact that the photo generated such widespread hostility and vitriol is a sign that the patriotic impulse is getting out of hand in America.” 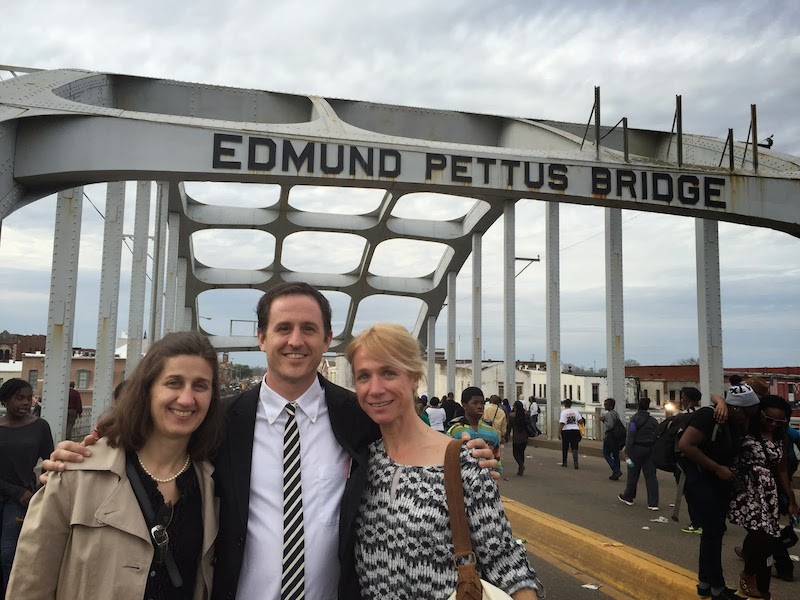 "Selma Alabama, 1965, According to The Rev Robert Leonard Powers": John Powers of Star Wars Modern posts his father's remembrance about his trip to Selma.

“During the days we had many, many meetings and carefully-programmed marches through the enclave to the police barricade blocking access to the outside world. We would sing and clap and carry on in the face of unsmiling, and doubtlessly unhappy, cops brought in from every sheriff’s department and state troopers barracks in Alabama. We would also spread out, left and right from the barricades along the bank of a ravine of some depth, like a moat but grassy and without water. Police spread themselves out along the facing bank. TV cameras stayed clustered at the barricade, of course, which added to our risk. I once saw a rather young religious sister, who must have been trained for the event by playing touch-football, dash down the bank on our side and up the other to where she had spotted an opening in the police line. Following her apparent training and previous practice at the game, she was ‘running for daylight’ as they say. The cop at the top of the bank on the other side was playing by his own more brutal rules, and greeted her with his baton held at either end, horizontally, striking her with a powerful blow across her shoulder and breast. She fell in a disarray of wimple and habit and crucifix and beads, acting out the sacrifice they symbolized. Although she was clearly very sorely hurt, she picked herself up and limped back down through the declivity, now our personal ‘vale of tears’ and up to our line, where she was gathered in by several other sisters. I remember thinking what a shame it was that the TV cameras were not on the spot to record the spectacle, which would have been shown everywhere on Sunday, and prompted every wavering Irish Catholic in Boston and elsewhere to enlist in the struggle.”

At BuzzFeed, Anne Helen Petersen's amazing essay, "How 'The Jinx' Narratively Manipulated Its Viewers," scrutinizes filmmaking techniques, such as when the camera goes slightly out-of-focus in the middle screenshot pictured above. "There’s a practical explanation: Durst was moving and the digital camera was struggling to auto-focus," Petersen writes. "But for the viewer, it creates a quick second of discombobulation, an understanding of this person and his testimony literally blurring."

Swedish actress Alicia Vikander is poised to become a major star after audiences see her in Alex Garland's upcoming sci-fi thriller, "Ex Machina." Here's a look at her work in Lisa Langseth's 2009 drama, "Pure," for which she won Sweden's equivalent of the Best Actress Oscar, the Guldbagge Award.