"Chris Rock Pens Blistering Essay on Hollywood's Race Problem: 'It's a White Industry'": A must-read essay penned by Rock for The Hollywood Reporter.

“It's a white industry. Just as the NBA is a black industry. I'm not even saying it's a bad thing. It just is. And the black people they do hire tend to be the same person. That person tends to be female and that person tends to be Ivy League. And there's nothing wrong with that. As a matter of fact, that's what I want for my daughters. But something tells me that the life my privileged daughters are leading right now might not make them the best candidates to run the black division of anything. And the person who runs the black division of a studio should probably have worked with black people at some point in their life. Clint Culpepper [a white studio chief who specializes in black movies] does a good job at Screen Gems because he's the kind of guy who would actually go see ‘Best Man Holiday.’ But how many black men have you met working in Hollywood? They don't really hire black men. A black man with bass in his voice and maybe a little hint of facial hair? Not going to happen. It is what it is. I'm a guy who's accepted it all.” 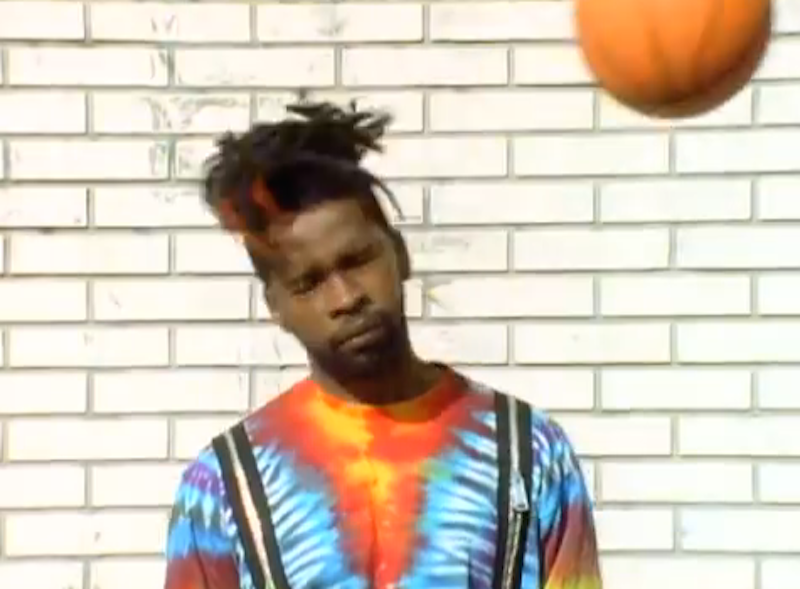 “A few days ago, I was walking down the street in my downtown Raleigh neighborhood. It was a chilly Thursday night and my hoodie was up. As I was walking, a pair of young, white girls was walking up the other end. As our paths began to meet, one of the white girls took her left arm and draped it around the shoulder of the other white girl, as though they were bracing each other tightly in case shit went down. When I saw this, I immediately thought, ‘You don’t have to do that.’ But I didn’t say that for fear of scaring these chicks. ‘That’s OK,’ I said. ‘Oh, hey, how you’re doing?’ they both seemed to mumble. As we passed each other, I turned around to see the one white girl take her arm off the other, secure that imminent danger was no longer coming. When I relayed this story to a white friend of mine later, he half-mockingly gave it to me straight, ‘Well, you are a scary, intimidating figure.’ It’s true. As a black man who stands six feet tall and weighs damn near 300 pounds, I’ve been seen as Frankenstein in the eyes of many white folk over the years. (A couple of years ago, I weighed damn near 400 pounds, so you can imagine how much I freaked out white folk then.) But I’ve also never committed a crime, went to jail or done anything that would make people go, ‘Watch out for that Negro!’ went they see me. Hell, I’m 38, and I’m shocked I’ve lived this long to not have any of that happen to me.” 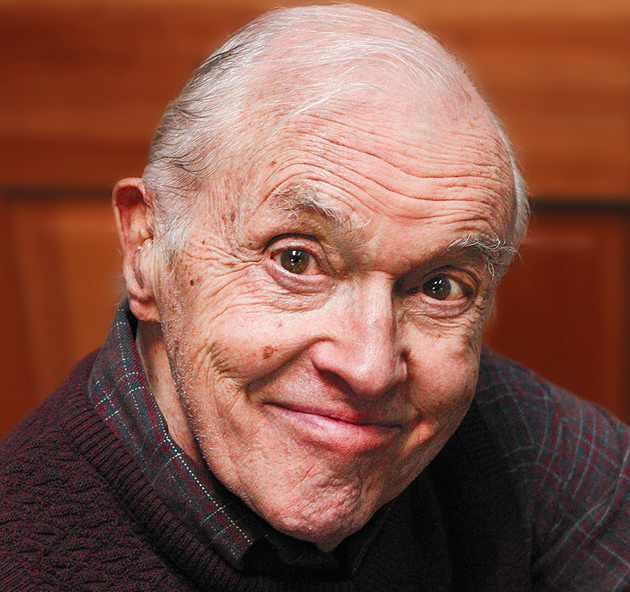 "Terry Kilburn: He Spun the Globe—It Stopped at Hollywood": From the archives: The child star of "Goodbye, Mr Chips" and "Swiss Family Robinson" spoke last December with E.B. Boatner of Lavender Magazine. His timeless portrayal of Tiny Tim in the 1938 version of "A Christmas Carol" (which I reviewed at Indie Outlook) will be on theater screens around the country Sunday, December 7th, courtesy of Turner Classic Movies and Fathom Events.

“I went to see director Sam Wood, and I did a thing for him, and he said, ‘The accent’s great, but I really wanted Alfalfa for this part.’ Alfalfa could no more do that accent than fly, so that was out. But he wanted a kid like him. I was kind of a pretty little boy, so he said, ‘I’m sorry, but no.’ When I came back in tears [MGM makeup specialist] Lillian [Rosine[ said, ‘Oh, for God’s sake! What does Sam Wood think I’m here for?’ And she put me in her makeup chair, greased down my hair with Vaseline, blacked out one of my front teeth, put freckles on my face. I’d been crying, so I already looked horrible. Then she took me back and dragged me in and said, ‘There now, does he look ugly enough for you?’ Sam Wood laughed and said, ‘OK.’ One day while we were shooting, somebody came and said, ‘You’re wanted outside.’ So I went out from the dark sound stage into the bright sunshine, and standing there was my father. I just ran and leaped into his arms, and we laughed and cried and it was incredible. ‘Lord Jeff’ was quite a success. I got fabulous reviews that said, ‘The busman’s son from London steals the show.’ It was thrilling. A dream come true–and my father was there, loving every minute of it. I also made ‘A Christmas Carol’ in ’38, and played Tiny Tim. I’ll always remember going onto the set at the MGM lot the first day. I think it was London 1830, and the snow was coming down–they were actually Kellogg’s cornflakes, bleached or something, but it was so beautiful. Oh, you can imagine that for a kid who loved acting and being in fantasy, it was extraordinary.” 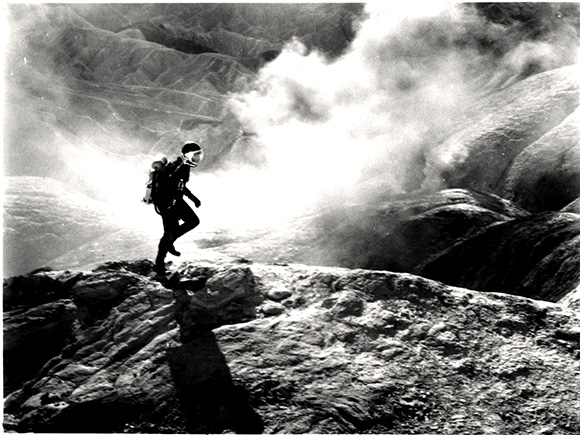 "From Jayhawkers To Jawa: A Short History Of Filming In Death Valley, Part I": A blast from the past penned by KCET's Christopher Langley.

“‘Rocketship X-M’ (1950) is the first of several science fiction films that worked in Death Valley. The location became as famous as a home for a variety of science fiction and apocalyptic movies as it ever was for westerns. Most film fans know that for two decades from 1950 to 1970 science fiction films were extremely popular in the United States. They were often cheaply made, unscientific in principle, and formulaic, but they said something to the audiences about their fears, hopes for technology and desire to escape the humdrum everyday lives of conformity they were living. Two space travel films stand at the beginning of this film craze: ‘Destination Moon’ (1950) and ‘Rocketship XM.’ ‘Moon’ was an expensive, George Pal production that was to be the flagship of the genre. ‘Rocketship’ came in as the cheaply made imitation. Ironically, it was this film that grabbed the public's attention and kicked-off their fascination with science fiction and fantasy. ‘Rocketship’ was a classic 1950's technological film as our country got onto the possibilities of space travel. But it also featured a story that was really apocalyptic in nature. The ruins of a civilization on Mars that had been destroyed by the inhabitants, reducing them to cavemen, was actually a powerful anxiety producer in the audiences of time. Now the audiences take for granted such prediction because of all the threats being promulgated by politics, the media or imaginative writers. That it was on Mars helped connect it to Orson Welles ‘War of the Worlds’ radio success that was still remembered.” 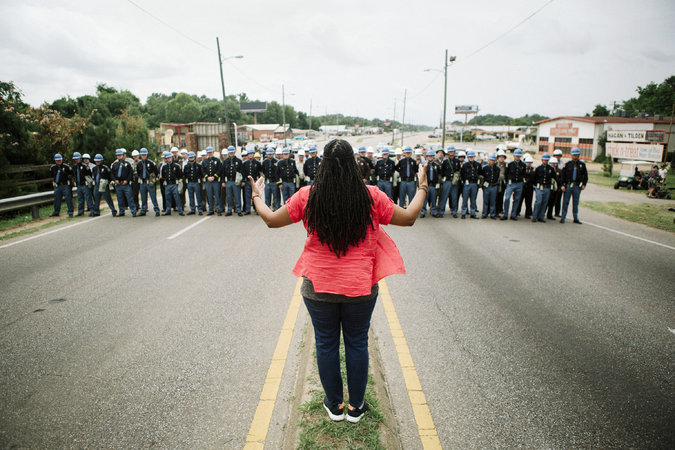 “Like many, I had hoped Ms. Bigelow’s Oscar for ‘The Hurt Locker’ would be transformative, and that soon female directors would be accepted as equal to men, and, crucially, hired as equals. But that hasn’t happened. In 2009, when ‘The Hurt Locker’ was released, women made up 7 percent of the directors on the top 250 domestic grossing films, according to an annual report by the researcher Martha M. Lauzen. As of early December, by my count, only 19 women — 7.6 percent — were directors on the top 250 grossing features released this year. ‘Selma’ may increase that percentage, as might another big-studio release, Angelina Jolie’s ‘Unbroken,’ about the Olympic runner and war prisoner Louis Zamperini. It will take more than these two filmmakers to disrupt the industry’s sexism, which has long shut women out from directing movies and, increasingly, shuts them out on screen, too. Notably, Ms. DuVernay and Ms. Jolie, having made movies about women, have now made the leap to bigger stakes with stories centered on men. I hope their movies burn up the box office, but I also hope they return to movies about women. We need those stories, and these days, female directors are often the only ones interested in them. Gender equality is an undeniable imperative. But it’s also essential to the future of the movies: This American art became great with stories about men and women, not just a superhero and some token chick.” 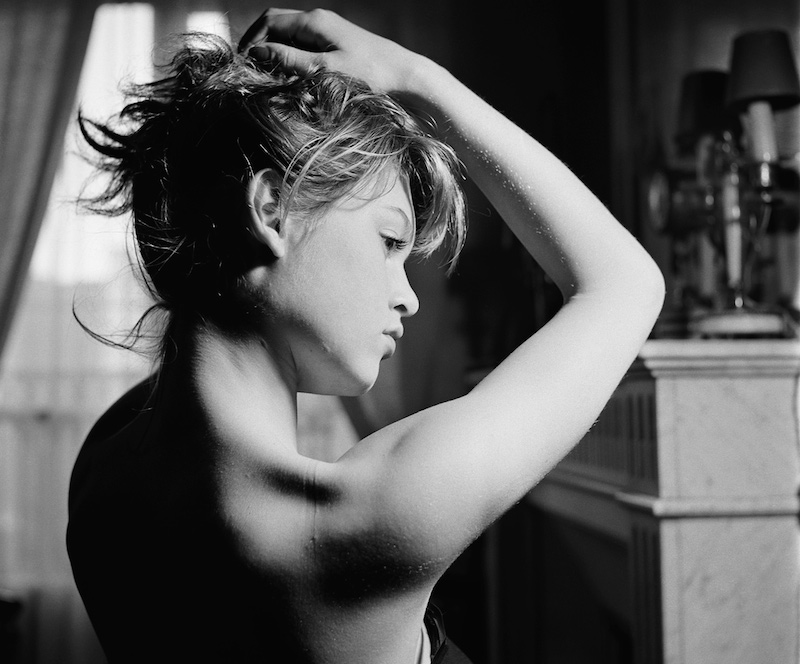 In the article, "Everyone is altered," Mashable's Josh Dickey reveals "the secret Hollywood procedure that has fooled us for years."