“What is happening in our conversation about Bill Cosby isn’t just about his downfall, although that is an important part of it. it’s about our attitudes towards women, rape, victimization, and sexual violence. It’s about a group of women who claim they were violated by a man, a man among many men in our culture who rape women every day, and who just also happens to be a comedy legend. Bill Cosby is a man who has achieved greatness in his lifetime. Those in the public eye who soar to such heights become archetypal, mythological gods in their relationship to us. While their achievements can inspire us to reach great heights, they may also reveal a great shadow, which can inspire us in a different way; to look at ourselves, our beliefs, our assumptions. Writers always fear that by the time they collect their thoughts on a subject and are finally able to write them down, the story will no longer be relevant. But this story isn’t going away, as women are still coming forward. This essay took time for me to write not because I was on the fence about the allegations: I believe the women. It took time because I realized that I couldn’t write about Bill Cosby without looking at the history of sexual violence in my family, my own experience with violation, and exploring whether I had at any time violated. Perhaps more than any other story in the media about rape, this one has the power to shake us to the core. And Bill Cosby isn’t the only one being accused of betrayal; for not believing these women decades ago when the allegations first surfaced, for not insisting on justice for them sooner, for desperately clinging to myths, when the truth is staring us in the face, to some extent we all stand accused. In other words, you can’t deal with Bill Cosby now without at some point dealing with yourself and your relationship with the truth. In L’affaire Cosby, yes, Bill Cosby is in seriously deep s—t, but you will also be defined.” 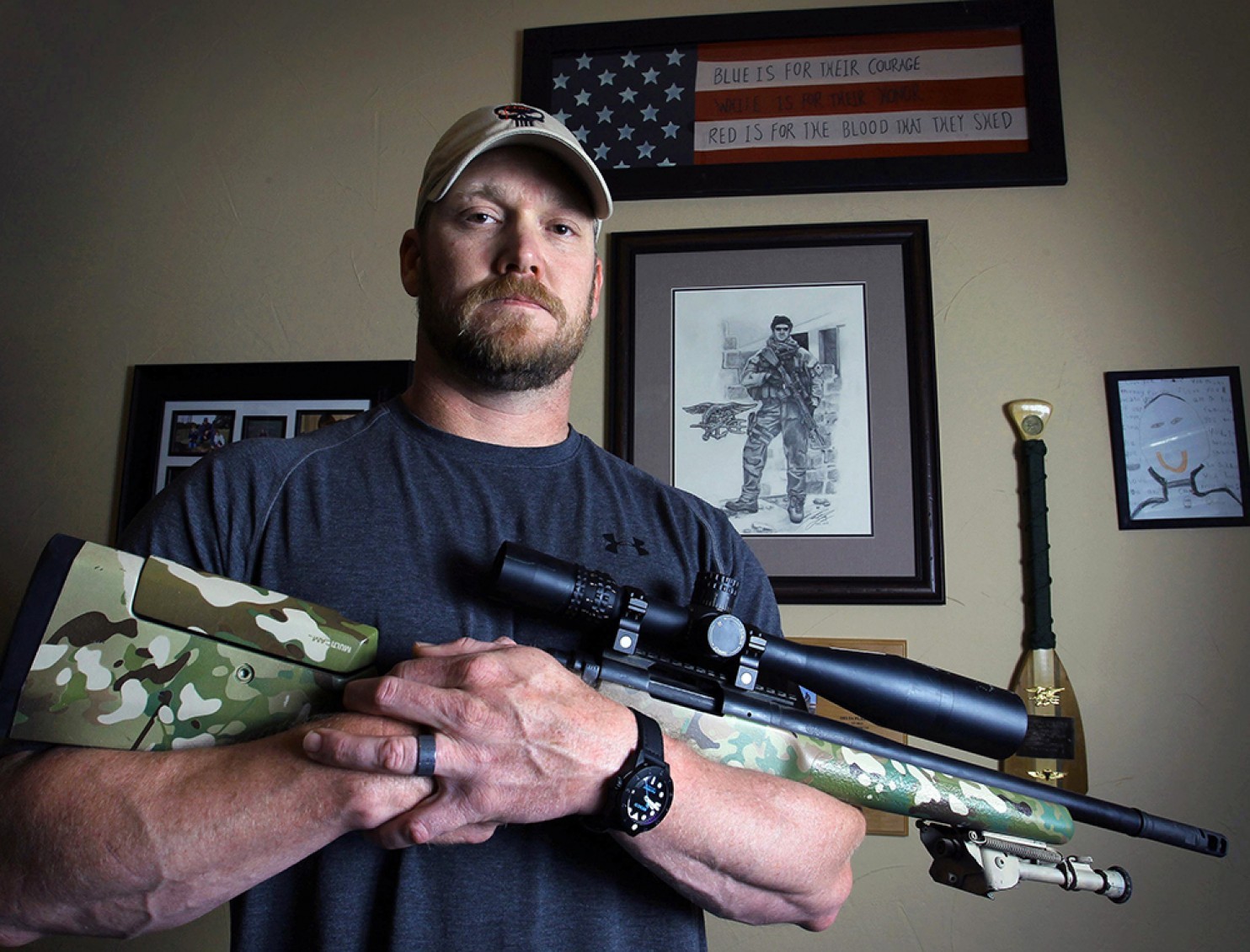 “His writing is drenched in braggadocio. ‘People ask me all the time, ‘How many people have you killed?’’ he wrote in ‘American Sniper.’ ‘My standard response is, ‘Does the answer make me less, or more, of a man? The number is not important to me. I only wish I had killed more. … The Navy credits me with more kills as a sniper than any other American service member, past or present. I guess that’s true.’ What was less sure, however, were some of the anecdotes he told after he left the SEALs in 2009 and returned to Texas. ‘After his incredible military career, he felt such high pressure to maintain his image,’ Mooney told The Post. One way he did this was bar fights, pinning it on ‘pent-up aggression.’ He told a story in his book of one time he and a pal pummeled a few ‘wannabe UFC fighters’ in a bar. ‘I would rather get my ass beat than look like a p—y in front of my boys,’ he wrote. That sense of superhuman toughness perhaps led him to tell stories reporters couldn’t confirm. One involved a cold January morning at a gas station southwest of Dallas. Two armed men, he said, approached him and told him to hand over the keys to his black F350. ‘I told them I would get them the keys,’ he told Mooney. ‘I told them they were in the truck and to just let me reach in.’ Kyle then claimed he reached into the car, pulled out a gun and, shooting under his armpit, killed both men. ‘It’s true,’ he said.” 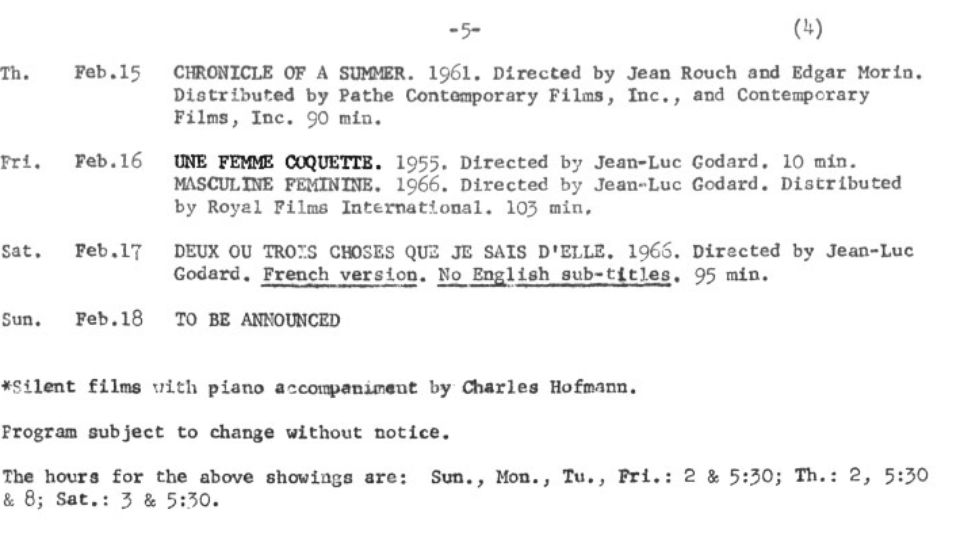 "Neither lost nor found: On the trail of an elusive icon's rarest film": Ignatiy Vishnevetsky's pursuit for Jean-Luc Godard's second short film, "Une Femme Coquette," presented in three acts at The A.V. Club.

“List-making types develop eccentric personal rituals—that is, more eccentric than list-making—as though they were carving out their own little niche of movie culture. My earliest, which started when I was 17, was to pick up the week’s Chicago Reader and read the film section at a combination video store and vegetarian restaurant that would later go out of business, with the video store portion closing first. I was poor and had just moved to Chicago and started living on my own, in an apartment that was occasionally invaded by rats. I would order the cheapest item on the menu, a five-dollar grilled cheese. It was my weekly luxury.Movie culture is, in certain ways, a culture of forming and organizing memories. This is Jonathan Rosenbaum’s pet subject—how filmmakers evoke memory, how movies connect to memories, how a critic can use his or her own memory as a tool. When I was 17, Rosenbaum was the critic for the Reader.It also happens that Rosenbaum was at the first American screening of ‘Une Femme Coquette,’ which occurred on the afternoon of February 16, 1968, in New York City, at the Museum Of Modern Art, as part of a retrospective programmed and introduced by Richard Roud. It screened on a double bill with JLG’s 1966 feature ‘Masculin Féminin.’ In that movie’s most famous scene, the characters—archetypal disaffected young people, dubbed ‘the children of Marx and Coca-Cola’—go to see a Swedish film. The film-within-the-film—shot in the now-demolished Scandic Continental hotel in Stockholm—is a parody of one of JLG’s favorite filmmakers from his list-making days, Ingmar Bergman. It’s an adaptation of ‘The Signal.’” 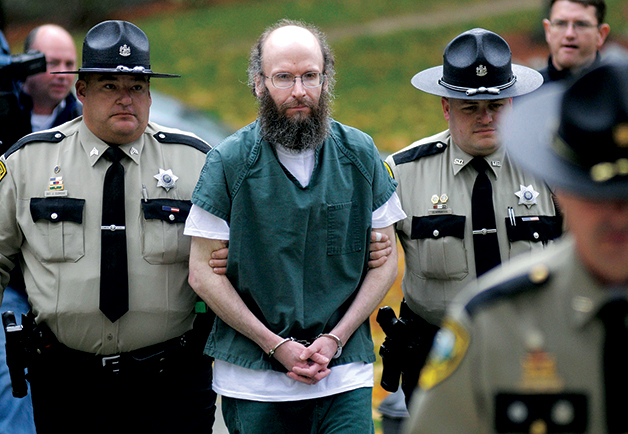 “The hermit set out of camp at midnight, carrying his backpack and his bag of break-in tools, and threaded through the forest, rock to root to rock, every step memorized. Not a boot print left behind. It was cold and nearly moonless, a fine night for a raid, so he hiked about an hour to the Pine Tree summer camp, a few dozen cabins spread along the shoreline of North Pond in central Maine. With an expert twist of a screwdriver, he popped open a door of the dining hall and slipped inside, scanning the pantry shelves with his penlight. Candy! Always good. Ten rolls of Smarties, stuffed in a pocket. Then, into his backpack, a bag of marshmallows, two tubs of ground coffee, some Humpty Dumpty potato chips. Burgers and bacon were in the locked freezer. On a previous raid at Pine Tree, he'd stolen a key to the walk-in, and now he used it to open the stainless-steel door. The key was attached to a plastic four-leaf-clover key chain, with one of the leaves partially broken off. A three-and-a-half-leaf clover. He could've used a little more luck. Newly installed in the Pine Tree kitchen, hidden behind the ice machine, was a military-grade motion detector. The device remained silent in the kitchen but sounded an alarm in the home of Sergeant Terry Hughes, a game warden who'd become obsessed with catching the thief. Hughes lived a mile away. He raced to the camp in his pickup truck and sprinted to the rear of the dining hall. He peeked in a window. And there he was. Probably. The person stealing food appeared entirely too clean, his face freshly shaved. He wore eyeglasses and a wool ski hat. Was this really the North Pond Hermit, a man who'd tormented the surrounding community for years—decades—yet the police still hadn't learned his name?” 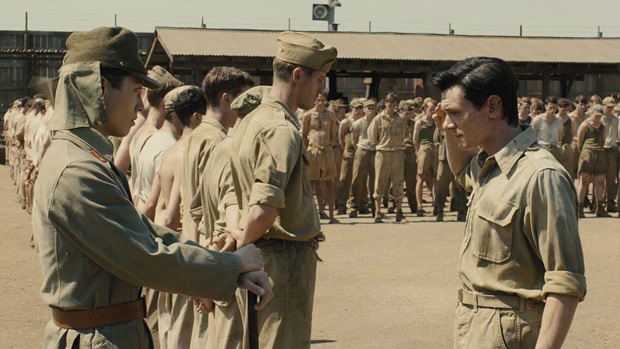 "Unbroken": Alissa Wilkinson of Christianity Today gives a two-star review to the Angelina Jolie hit, arguing that the film tells the wrong tale of triumph.

“The story of resilience and outlasting and will and determination is scored and shot, acted and directed and sometimes visually striking, and what it inspires you to do is hate your enemies so hard that you can prove you're better by them by making it past the finish line. Again, the image used in much of the marketing (including what's currently a banner ad on IMDb) is drawn from a scene that specifically illustrates this. Sometimes I get the uneasy feeling that this is how we Christians conceive of what Jesus inspires us to do, which is to suffer and die, only to be resurrected on the third day and yell a cosmic Ha, you lose at the forces of evil. Instead of things like do what is crazy, pick up your cross, sacrifice for others, consider others better than yourself, give, give, give and love with no expectation of return. Sometimes the swagger in our voices when we talk about the gospel, or talk about ‘those people’ and how they are plotting our ruin, sounds less about sacrifice and letting go of what we think we deserve, and more about winning the game and proving we're the best.” 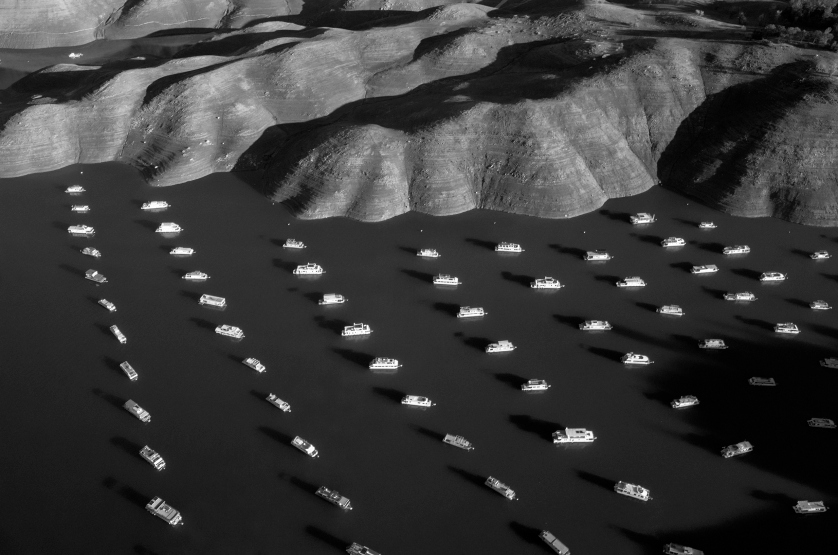 TIME's list of The Top 10 Photos of 2014 includes this unforgettable image captured by Tomas van Houtryve.

"Moonshine," Alexandre Desplat's arrangement of the Russian folk tune, "The Moon Is Shining Brightly," was featured over the end credits of Wes Anderson's "The Grand Budapest Hotel." It is glorious.