"48 Hours On The Most Radical Set In Hollywood": BuzzFeed's Diana Tourjee reports from the set of "Transparent."

“It’s 8 a.m., and the front corridor of a tan, generic Paramount office building, where this morning’s shoot is taking place, has been commandeered by [Jill] Soloway’s feminist enterprise. Some hundred men and women mill in and out. The production crew have already shot the first several episodes of Season 2; the episode they’re shooting now falls midway through the season. Cameras, lights, and wooden director’s chairs strapped with black canvas, their backs emblazoned with the show’s title in orange lettering, dot the room. Jeffrey Tambor is standing near a row of monitors, talking to Silas Howard, ‘Transparent’’s first transgender director. (This is the first and only episode Howard has directed for the show; Season 1 was directed by Soloway and Canadian film director Nisha Ganatra.) I envy the perfect periwinkle lacquer of Tambor’s pedicure. It works seamlessly with his wardrobe: that of an airy, confident, and comfortable Californian woman of a certain age. His long gray wig is held by a butterfly clip. Howard leans in to give him direction for the scene’s next take. As they huddle, a familiar voice sounds from my side. Barnes, Jeffrey Tambor’s assistant, is sitting in a nearby chair. She calls to me with one black headset strategically planted below her coiffed blonde hair, holding another in her hand. ‘Here, honey, put these on,’ she says in her charming country drawl.” 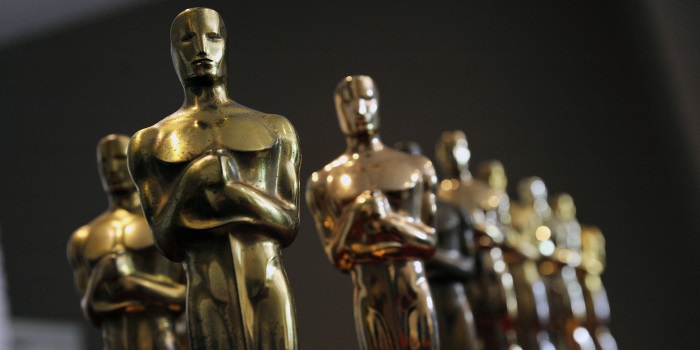 "First is the Worst: Looking at Critics' Awards": A terrific piece from Next Projection's Derek Deskins.

“Living in Austin and not New York City or Los Angeles, the amount of “for your consideration” screenings are nearly nil. ‘Spotlight’ and ‘Carol’ are only just now in extremely limited release and films like ‘Anomalisa,’ ‘Joy,’ and ‘The Big Short’ haven’t even been shown. That doesn’t mention juggernauts like ‘The Revenant,’ ‘The Hateful Eight,’ and ‘Star Wars: The Force Awakens,’ which are all expected to feature highly in the larger awards conversation, and are not making any attempts to garner the awards of critics. This doesn’t mean that critics’ awards are not relevant, just that maybe they should be viewed differently. Rather than trying to act as a predictor of the Oscars, these critics’ awards should act as your portal into the forgotten. You, the film fan, should approach such awards with the understanding that very few, if any, critics have found a way to see every film that has been released that year. I have no idea how ‘Anomalisa’ compares to ‘Inside Out,’ nor can I comment on whether or not Joy is anything that should be celebrated. As a Tarantino faithful, I am beyond excited for his latest, but my integrity precludes me from including it in any of my votes, ditto for ;The Revenant.’ So what use are critics’ awards? Well…while we may not have seen them all, we certainly have seen a lot. Critics’ awards should be a celebration of great film, regardless of the strength of an awards campaign. These selections should be used as a time to consider what the Oscars will likely overlook. Make it your mission to find and enjoy films like ‘Tangerine,’ ‘The Look of Silence,’ ‘Welcome to Leith,’ and ‘Slow West.’ Consider more deeply performances in foreign films like ‘The Tribe’ and ‘The Second Mother.’ Reconsider films with more modest roll-outs like ‘Sicario’ or outright flops like ‘Steve Jobs.’ Don’t be afraid to go back and re-watch ‘Mad Max: Fury Road’ and ‘Ex Machina’ because they are both just that good.” 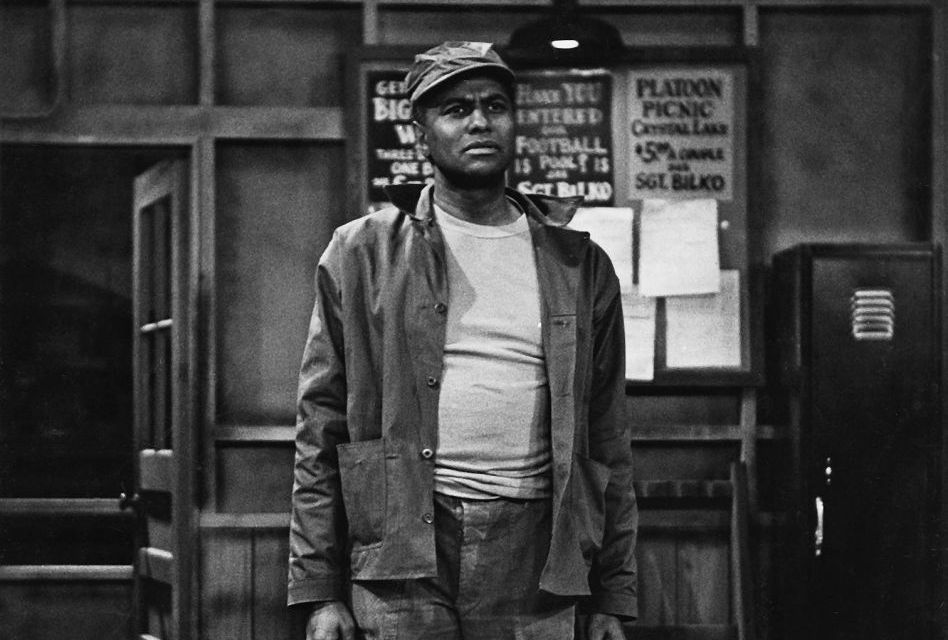 “From 1951 on, Sidney made a living on TV, getting a few notable roles, including Cato, Hercules Mulligan’s slave and fellow-spy, in ‘The Plot to Kidnap General Washington,’ in 1952. For two years, he appeared as one of two African-American soldiers on ‘The Phil Silvers Show’—a casting move protested by Southern stations. (The writers ignored them.) Over time, he amassed roles on more than a hundred and seventy shows, as well as a lucrative sideline in voice-over work and advertisements. (He played the onscreen role of Waxin Jackson for Ajax.) But the majority of his parts were walk-ons: doormen, porters, waiters. ‘I had a whole goddamned career of ‘Yassuh, can I git ya another drink, sir?,’’ he told Kisseloff. ‘But I did what was available. I did not mix feelings with the fact that I needed money to live.’ With each setback, Sidney grew more frustrated, according to Foster Sidney, who married Sidney in 1954. Foster Sidney was the daughter of a dentist, educated at Howard University, a member of the Washington, D.C., African-American élite. She had persuaded her family to let her move to New York to be a French translator but dreamed of being an actress. Foster Sidney recalls, ‘He knew I had these aspirations, but he said, ‘One actor in the family.’ I, timid little thing, said, ‘Yes, dear.’’ Their marriage was contentious, with Sidney resenting Foster Sidney’s ‘bourgeois’ background; they separated, and had no children, but did not divorce until 1977. (In later years, Foster Sidney returned to acting, a period she calls ‘ten years in Heaven.’)” 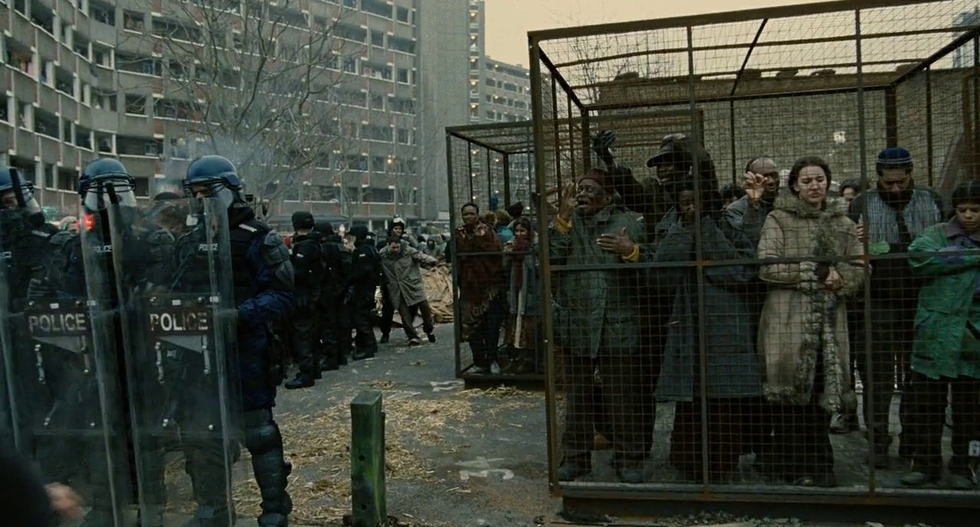 "Are We Living in the Dawning of Alfonso Cuarón's 'Children of Men'?" Asks Tribeca's Ana Yamel Rodriguez-Cuervo.

“Directed by Alfonso Cuarón, ‘Children of Men’ is one of the best movies of the last 10 years. The film earned rave reviews when it was released in late 2006, but it wasn't a box office hit. Made for a reported $76 million, Cuarón's film only grossed $35 million stateside and $69 mil worldwide. Perhaps audiences weren't ready for a film that spoke so damningly about the uncomfortable issue of immigration, nor one that presented such a realistic and troubling portrayal of our potential future. But now, nine years later, with the alarming international immigration crisis, the constant worldwide terrorist attacks, and endless turmoil in Middle East, the time has come again to talk about ‘Children of Men.’ The first time I saw the film was one of the most personal and emotional cinematic experiences I've ever had. ‘Children of Men’ ended and I couldn't stop crying. At the moment, I couldn't understand why, but the film had left me devastated. Only later did I realize it was the frightful thought that I may have just watched humanity's fate play out on the big screen. I felt helpless. Nine years later, the world feels like it's caught in a downward spiral, and my head spins as I keep asking myself the same question: Are we living in the dawning of ‘Children of Men.’” 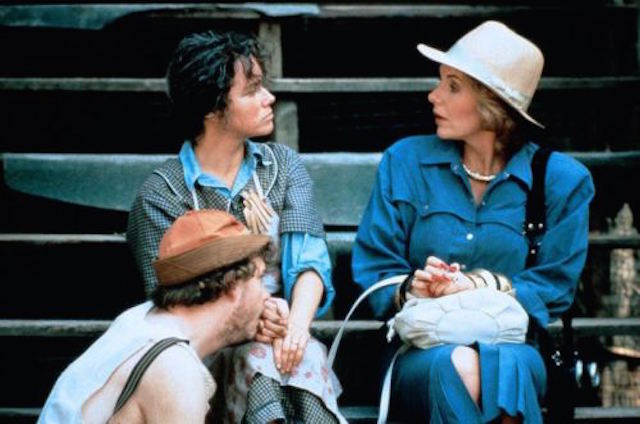 "'Shy People' and the Consequences of Excavating a Lost Film": A must-read article from The Awl's Bobby Finger.

“In 2014, ‘Shy People’ barely exists. It’s only available on Laserdisc, VHS, and YouTube—a trifecta of 4:3 purgatory. The audio sucks; the video sucks; the whole experience sucks. But the film itself is a hell of a thing, even on the smallest of screens. After opening with a hypnotic, three-minute tracking shot through the streets of midtown Manhattan—one of the only parts of the film that the critics unanimously enjoyed—we meet Diana (Clayburgh), a staff writer for Cosmopolitan, and Grace (Plimpton), her rebellious and coke-addicted teen daughter who also happens to be sleeping with Diana’s ex. In an effort to mend their relationship, Diana asks Grace to tag along on her latest assignment: a feature on some kooky distant relatives who live deep in the Louisiana bayou that will no doubt make Cosmo readers giggle. After a lengthy journey through the alligator-infested swamps, they arrive at the home of cousin Ruth (Hershey) and her sons. Mark is a reluctant provider with a short fuse and a pregnant wife (Mare Winningham), whom Ruth despises; Tommy is the handsome one—about Grace’s age—whom Ruth has locked in a cage for reasons that are never revealed; and Pauly is a mentally handicapped gentle giant who’s unfazed by all the craziness surrounding him. The eldest son, Mike, moved away from the compound years ago. ‘He went to town,’ Ruth tells Diana. ‘That’s dead to me…You’re with us, or you’re against us.’ Oh, and Ruth’s dead husband Joe (actually dead, not just in town) haunts the surrounding bayous and keeps the whole family safe. Though the setup sounds like a fairly conventional ‘city folk meet country folk’ narrative (one tackled with significantly more humor that same year in ‘Big Business’), ‘Shy People’ quickly turns into a relentlessly bizarre and maybe-even-a-little-campy examination of life, death, and family.” 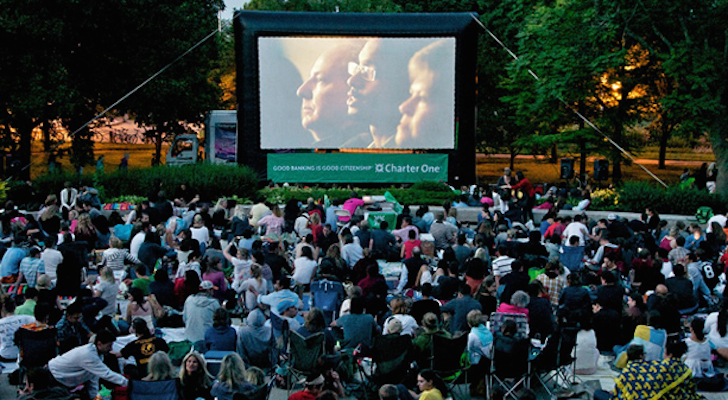 Salvatore Consalvi's fascinating documentary project, "Sidney Has No Horses," has launched its Kickstarter campaign. Check it out here.