“Mad Max: Fury Road” exploded across screens this weekend in plumes of cherry red and saffron yellow smoke, with swarms of chalk-dusted bodies coiling across monstrous vehicles the color of dried blood. It's a thrilling, excessive spectacle, from the mind of 70-year-old Australian director George Miller. To understand where exactly “Fury Road” is coming from, it helps to know a man named Enzo G. Castellari, director of films with such amazing titles as “Any Gun Can Play” and “Kill Them All and Come Back Alone.” Few genres better encapsulated the excesses and anxieties of the ‘70s and ‘80s than post-apocalyptic movies. And few genres were an utter free-for-all of madness and color like the Italian post-apocalyptic movies that filled shelves of video stores from Montana to Missouri. Their American cousins tended to be serious or at least take for granted that all was about to be made glass and ash by the Big One, and set about to discover what humanity would make of itself in the ruins. Italian post-apocalypse was gaudy, cared not a whit for internal story logic, and if it could also cash in on several other current hits so much the better.

There had been “life after the mushroom cloud” stories before, but it was “Mad Max” (1979) that pointed the way for what was to come. A modest hit in the States, it was mishandled by its overseas distributor AIP. Deciding to dub the cast with flat American accents and understandably troubled by how to sell such a genuinely strange film, they settled for a generic cop on the edge angle; “Dirty Harry” in muscle cars. 1981’s “Mad Max 2: The Road Warrior” was a different story. It made a bundle across the globe, striking a particular nerve in Italy. An odd reaction until you consider that the film is at heart a Spaghetti Western. The lone gunslinger comes to a frontier town under siege. He saves the day, shoots enough people, and wanders off alone into the sunset, for his heart is heavy and peace can never be his. Also, and perhaps even more key to “Road Warrior” cash-ins becoming a cottage industry, they were cheap. If you could attach spikes to a dune buggy and spray paint a mohawk pink, you had a post apocalyptic movie half in the can. 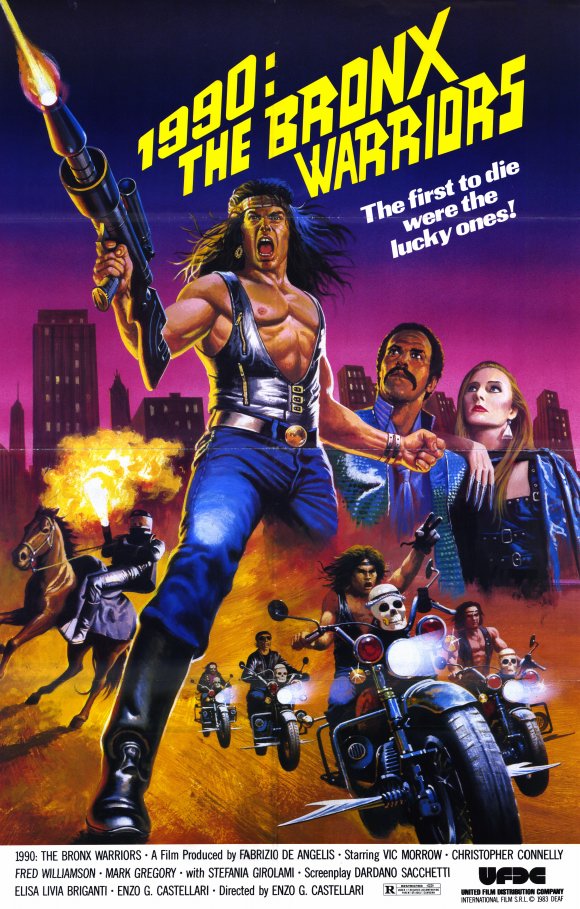 Of the first wave of imitators, Castellari's “1990: The Bronx Warriors” (1982) is one of the best. Mixing “The Road Warrior” with the next two biggest influences on Italian post-apocalyptic movies, Walter Hill’s “The Warriors” (1979) and John Carpenter’s “Escape from New York” (1981), the director steers a mad concoction of Old Dirty NYC second unit footage, Fred Williamson in red satin pirate blouses, motorbikes with plastic skulls stuck to them, and very, very dangerous street mimes. It was followed by a loose series of sorts, “Escape from the Bronx aka Escape 2000” (1983) which got its lumps on “MST3K” (“Toblerone!”), and “2019: After the Fall of New York” (1983) which beat “Children of the Men” (2006) to the punch by 23 years in dealing with the hero trying to smuggle the last fertile woman on Earth to safety.

Meanwhile, other countries were getting into the act. As expected, the aftermath in Australia’s neighbor New Zealand tended to be quieter and involve more sweaters. “Battletruck” aka “Warlords of the 21st Century” (1982) was the most obvious “Road Warrior” clone but made good use of contrasting the violence with the country’s pastoral landscapes. “The Quiet Earth” (1985) on the other hand, took its cues from “The World, The Flesh, and The Devil” (1959) with the attendant trouble of when “The Last Man on Earth” finds out that ain’t necessarily so. Canada had astronauts watching helplessly as the clock struck midnight in “Defcon-4” (1985). And Great Britain gave new depths to “bleak” in “Threads” (1984). 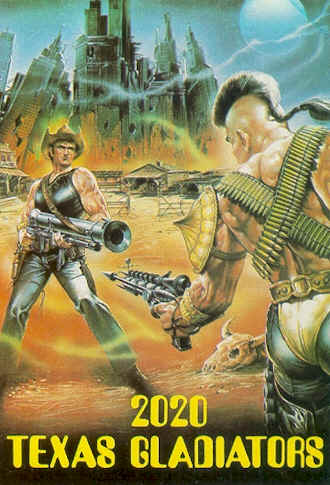 But it was Italy that kept the fly by night video labels working overtime, mixing and matching from whatever was a hit at the time and putting in it the desert. If you wondered what “Blade Runner”’s cityscapes would look like constructed out of cardboard tubes and Christmas lights, “2020 Texas Gladiators” (1982) has your answer. If you were curious if a producer ever just handed a director the poster in lieu of a script and said “match this,” David Worth, director of “Warrior of the Lost World” (1983) confirms so in an interview. It was a wild, crazed gold rush, supported by hungry distributors and independent production houses like the gloriously infamous Cannon Films. There was no gang theme too outre, no future slang too forced to not be given a try. The output was such a ridiculous torrent it was only expected that genre exhaustion would come sooner than usual, and one of the first signs was the franchise that had started it all.

“Mad Max: Beyond Thunderdome” (1985) is an interesting film that can’t quite escape its Frankenstein-ish origins. Director George Miller took a script about a group of feral children he’d been unable to get into production and awkwardly worked it into the second “Mad Max” sequel. But just as much as its seams showed it had some of the most exhilarating action sequences of the decade and a great Maurice Jarre score. The same could not be said of the increasingly threadbare Italian fare. For those committed to seeking out the residue that sticks on the other side of the bottom of the barrel, 1987’s “Interzone” is a dismaying example on multiple levels, exhibiting that last gasp of any trend: “Uh oh, it’s almost over so let’s make a spoof of it!” It might not have been such a bad idea if the script, or the acting, or the directing could agree on what was actually supposed to be funny. Everyone looks embarrassed, confused or some combination of the two with only female bodybuilder Teagan Clive deciding to have a ball and play her villain as though Roseanne Barr had been cast as Thulsa Doom. 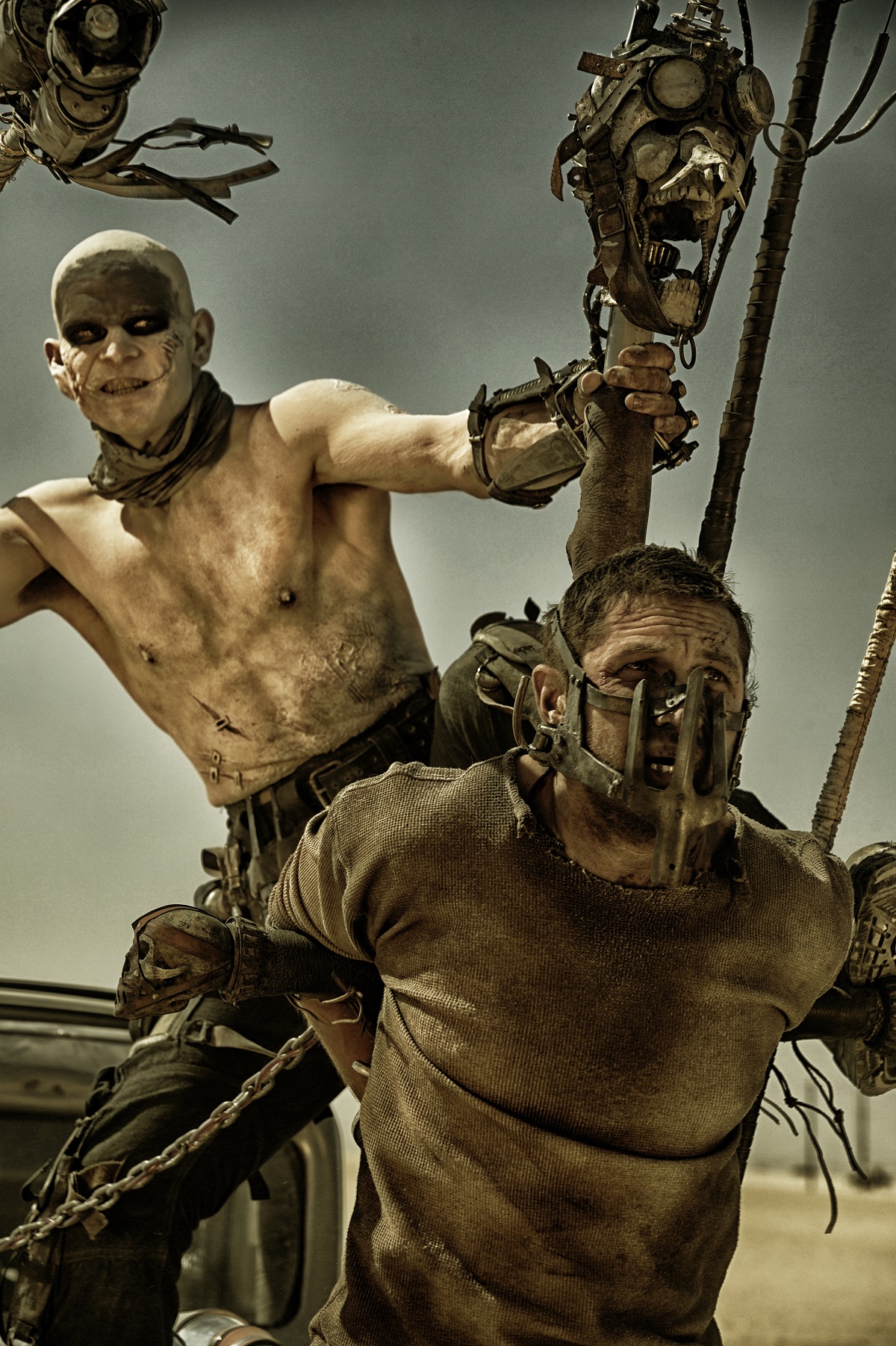 The end of the Cold War provided a natural death for the genre, but, curiously, as it becomes apparent we’re capable of destroying our civilization without any outside existential threat, post-apocalyptic movies seem to be seeing a revival (mainly through the dystopic lens of properties like “The Hunger Games”) It seems right that when the world won’t stop burning, Miller returns with the original. But a funny thing has happened in the 30 years since “Thunderdome.” As much as Italy took from him, he seems to have paid equal attention to what they were turning out. “Fury Road” is full of arresting, bizarre images. In a ruined swamp, costumed figures on stilts poke through the gloom, suggesting that a Cirque du Soleil troupe survived the apocalypse. In a ghoulishly brilliant touch, the "war boys" of the villainous Immortan Joe spray paint their mouths in chrome before suicide attacks so their teeth resemble the grills of their sacred cars in death. About all “Fury Road” is missing is Fred Williamson as an untrustworthy town boss. And if that's not enough, there is a perverse strain of decency running through the carnage, because all this is ultimately about respecting the rights of women to their own bodily autonomy….no, really.

And here is the great secret of my love of post-apocalyptic movies. It’s an oddly hopeful genre. Yes, there are entries where we all fall down, but, more often, it’s about reaching safety, finding water, the lost city, getting the gasoline out, etc. There is terrific comfort in being reminded that, despite our best efforts, despite all the intentions of our best and brightest, we manage to outwit ourselves and continue on another day. There is always a reason to build a fire, to tell the story, to look out for one another. And if we can be reminded of that via car chases and a flame belching guitar, well, what's the harm in that?