The Women of Schwarzenegger's Golden Age

Arnold Schwarzenegger enjoyed a particularly rich Golden Age as an action star, one that was marked more often than not by his films having interesting, layered women in them. His earliest starring roles, “Conan the Barbarian” and “The Terminator,” had great co-stars in Sandahl Bergman and Linda Hamilton, respectively. And when he proved enough of a box office draw to warrant creating such a thing as the Arnold Schwarzenegger Vehicle, those projects came with a much-better-than-average female lead. 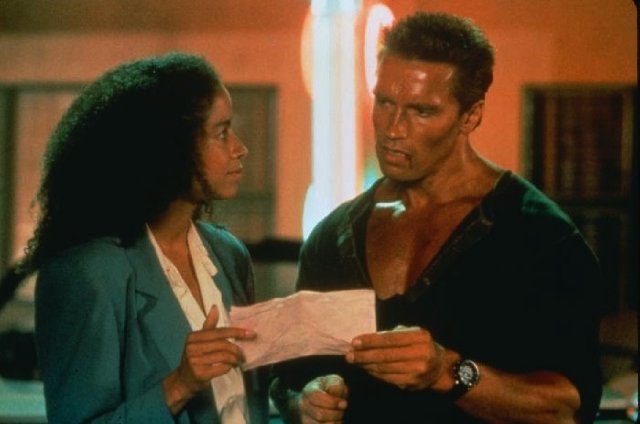 1985’s delirious “Commando” gets a large part of its “It Happened One Night”-on-steroids charm from Rae Dawn Chong. She plays a flight attendant who through an “only in an eighties action movie” series of convoluted steps ends up awkwardly firing a rocket launcher at a pursuing car. She goes from terrified to taking great delight in the spirit of things as she aids Schwarzenegger in rescuing his daughter. The film is hilariously bright and buoyant. Its violence is as cheerful as the steel drums on the soundtrack. The film clicks because everybody looks to be having the time of their lives. And that mood is infectious.

“Raw Deal” is one of Schwarzenegger’s most underrated films. Playing a former Fed who infiltrates a mobster’s gang he meets his match in Kathryn Harrold. Playing the usually thankless role of the Mol, Harrold has a real forties movie dame quality. You could easily see Barbara Stanwyck play this type of part, sizing up Schwarzenegger as a phony in one glance, and braining a would be assassin with the arm of a mannequin when they’re attacked in a dress shop. The film earns major points by not killing her off horribly to prove the bad guy’s bonafides. Instead she expertly navigates a sea of dangerous men, including the hero. There’s even an admirable sense of partnership between Harrold and Schwarzenegger. His character is married and rather than get bogged down in an ill fated dalliance they help each other make it out alive.

“Running Man” is unfortunately of that stripe of not very good film that thinks it’s considerably more clever and funny than it is. Withering in the shadow of the far superior “RoboCop” you’re much better served watching Schwarzenegger be hunted for sport in “Predator.” “Running Man” does have a good performance from Maria Conchita Alonso. In fact Alonso points to a much better film about the everyday compromises good people make to survive in dystopic societies. Still, if you ever wanted to see Richard Dawson blown up on a luge it’s the only game in town. Speaking of “Predator” among its expertly sketched stock characters is Elpidia Carrillo’s rebel fighter. Like the rest of the cast she does a lot with a little. Fierce and determined to escape, she only stays with the group when she witnesses a far more deadly invading force. She is denied weapons at the end as a life saving gesture; the alien won’t attack an unarmed prey. She is the only one of Schwarzenegger’s party to survive, a sign that she belongs there much more than Schwarzenegger and his Black Ops meddlers. 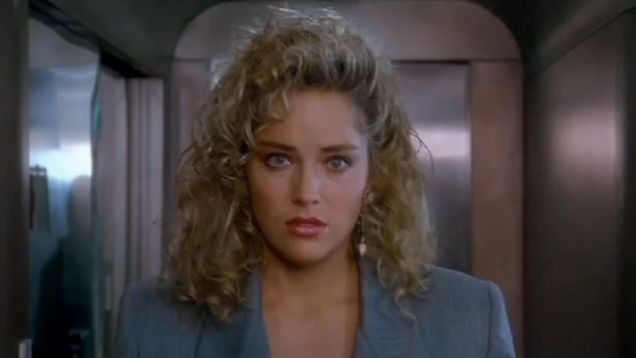 The penultimate film of his golden age, 1990’s “Total Recall” is the brilliant, messy, profane satire and action romp “Running Man” wasn’t. This comes as little surprise as “Total Recall” was helmed by “RoboCop’s” director Paul Verhoeven. It’s a film that’s aged uncomfortably well, certainly better than the lifeless 2012 remake. Its vision of a corporate future and a population self medicating with virtual reality toys seems pointing to now. (Come on, you can’t tell me you couldn’t see Trump promising that *his* Martian casino would have five-breasted hookers as three-breasted ones are for losers.) The film is set off by two contrasting women. Sharon Stone is excellent as a Crystal Light Femme Fatale. While Rachel Ticotin is a working class hero, bold and brave. Stone is merciless as Schwarzenegger’s faux-wife turned assassin. And Ticotin is much more interested in the resistance she’s part of succeeding than rekindling their romance when Schwarzenegger finally makes it to Mars. Both help create a world that would soon be coming to an end as the hard R rated Blockbuster gave way to the weak tea of the PG-13 rating.

As the nineties rolled on Schwarzenegger's films began to settle into expected ruts. The coke-dusted, berserker brio of let’s put on a show spirit of action movies faded into nineties bottled water wait for the video lethargy. And parts for women, across the board, began to sort into the horrific The Mommy, The Nag, and The Prize desert mainstream Hollywood is currently stuck in. There is real nostalgia for eighties action films these days. And it’s not just a longing for a lost decade, it’s also for the assumption audiences were interested in watching women kick ass and be interesting too.