The Trouble with "Carrie": Strong Female Characters and Onscreen Violence

Carrie at the prom—a scarecrow of a girl commanding an inferno—is one of the most iconic images of female vengeance. Bullied at school and tortured at home by a fundamentalist mother, Carrie is defined by her humiliation: After her first period, she's pelted with tampons by a gaggle of mean girls, and then locked in her mother's "prayer closet" for hours. Insurmountable forces of nature, culture, religion—and even family—conspire to grind her into ash. This only makes the last third of her story, when she brings an atomic reckoning to everyone who's made her suffer, so damned cathartic. With this catharsis, however, comes a transgressive vision of when, and why, women are allowed to get righteously violent onscreen.

Kimberly Peirce's remake of Brian De Palma's classic comes at a time of collective pearl-clutching about "strong female characters," with everyone from Natalie Portman to Kareem Abdul Jabbar waxing philosophic about what constitutes an authentic, yet affirming, display of womanhood. "The fallacy in Hollywood is that if you're making a 'feminist' story, the woman kicks ass and wins," Portman says. "That's not feminist, that's macho."

Of course, watching Ripley claim victory against the alien queen, or Katniss Everdeen deploy wits and arrows to save the boy (and the day), is legitimately thrilling: There is a life beyond "love interest." Sarah Connor's abs may be as intimidatingly unattainable as Barbie's waist, but she got ripped to save the world. Though they're surgeons with shotguns, blessed with strategic minds as ruthless as their right hooks, these "strong female characters" aren't always motivated by machismo.

Whether she's volunteering to take her sister's place in the arena or grooming her son to lead the resistance; gunning down the gangsters who sell drugs to the kids in her neighborhood or swinging swords to avenge her daughter, the "strong female character" is often stirred by a maternal concern, a quintessential desire to preserve her community, to protect the weak and vulnerable. Her bad-assery must be in the service of a greater good. Even when she's more ethically complex (like the Bride, who begrudgingly admits that all the people she killed to get to her daughter, "felt good"), she never takes a place at the table of Walter White's grand epiphany: "I did it for me." 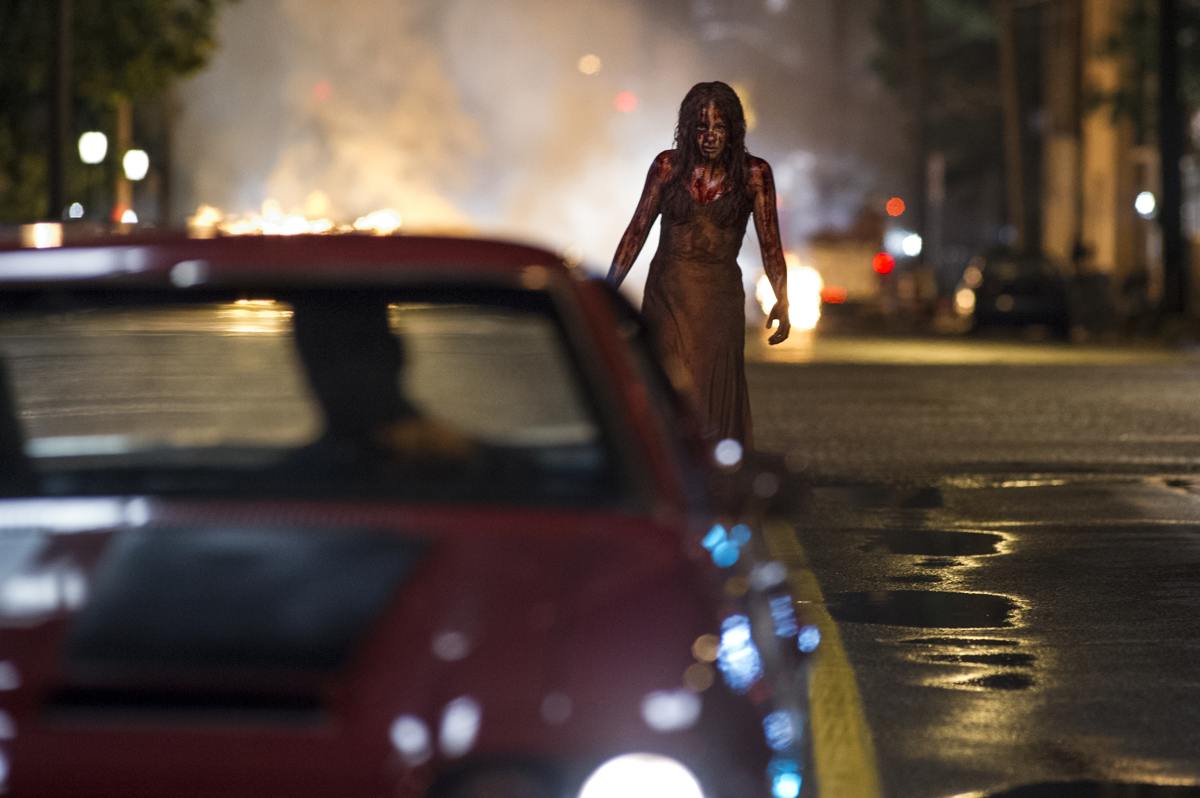 Carrie does what Beatrix Kiddo and Ellen Ripley and Katniss Everdeen don't: She does it for herself. Her vengeance, her violence, is in service to no one, no noble good. She doesn't kill because her family and friends have been threatened. There are no friends, no fellow outcasts, to protect from the bullies. No little sister to shield from Mama's wrath. Only her. And she is enough. Carrie kills because she was wronged.

Katniss takes up her father's bow to feed her family. Coffy picks up her gun to protect her community from the tainted smack that zombified her sister. The mousy Sarah Connor of the first Terminator transforms into the leonine warrior of Terminator 2 because of who her son will become. These narratives reflect the ways our national hand-wringing over women's roles still focuses on service to others—how to balance being a mom and a wife, a dutiful daughter and a good friend while holding her own in the office. In "The Hunger Games," Katniss' fellow tribute, Peeta, tells her that he wants to show his oppressors that he's not "a piece in their game…they don't own me." Katniss' response is all too familiar to any woman who's ever shouldered too great a load for too little pay, just to keep mouths fed and bodies warm: "I just can't afford to think like that."

Carrie's arc isn't a straight line from great power to great responsibility; it's a steady spiral into one core truth: She doesn't deserve what's been done to her. The modern day Carrie is even more overtly aware of this; when Mama tears into her for "becoming a woman," Carrie insists that she didn't sin. "You're the one who sinned, for not telling me," she says. Carrie truly "can't afford to think like that "since standing up for herself has only brought on more abuse—until, of course, she has the power to make Momma her rag doll, to lift her up and pin her down, to put her in that closet. 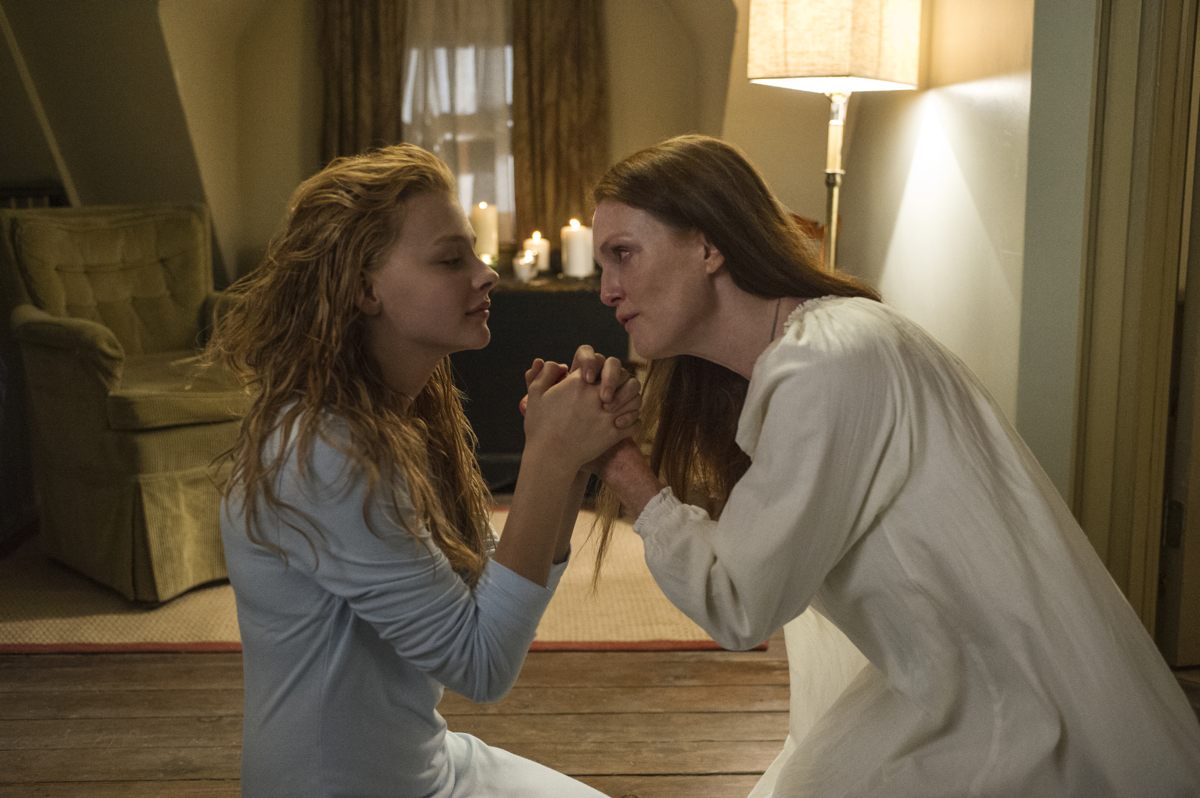 Her defiance is fueled by quintessential teenage desires—a first dance, a first kiss; to wear a pink prom gown, to finally belong—and they're shown as meaningful, worth fighting for; even though they don't hinge on the lives of innocents. De Palma's prom sequence is gauzily lit, dappled in surreal blues and greens. "It's like being on Mars," Carrie says. It's more like Heaven compared to the shroud-like grays of the White house. Peirce's vision of prom could come straight out of any standard teen movie, but that's the point, the pathos. When Carrie alights from the limo, she looks like she's touring the ninth wonder of the world.

So when that bucket tumbles and that gym becomes the prayer closet writ large, we want Carrie to become the matchstick at the center of a leveling blaze. Sissy Spacek's Carrie razes her town with a ghostly somnambulance, but Chloe Grace Moretz's incarnation wrecks her havoc with a balletic precision. Peirce has called her film "a superhero origin story," and the sequences where Carrie comes into her power have a revelatory zeal: When she levitates her bed, her face opens like a parched bud in a sudden downpour. Now, finally, she's special—not the backwards freak her schoolmates see, or the sinful wretch her mother says she is. Carrie dedicates herself to turning her telekinesis inside out, achieving a mastery that demands admiration—no matter how darkly, how chaotically, it manifests.

Carrie's coterie of tormenters is dispatched with panache: crushed in an accordion of bleachers; pinned to the floor and trampled; whipped with electric cables, then burned alive. The opening night crowd I sat with cheered at each death. "Yeah" and "Hell yeah" erupted through the theater when Carrie sends the queen meanie through the windshield of her boyfriend's getaway car. These outbursts were the hisses of a pressure valve finally released. Our secondhand endurance of Carrie's daily persecutions—the incessant staring and snickering, the lockers sprayed with "Carrie White Eats Shit"—is too painful, too oppressive. We can easily imagine the intensity of Carrie's release when she raises her arm and slams those doors shut.

The "strong female character" who comes closest to equaling Carrie's volume of carnage is arguably the Bride. But before she turns the House of Blue Leaves into a crimson slip-and-slide, she is battered in flashback after flashback: volleyed between assailants, panting and heaving under the heft of her belly; blood-spatter sullying her bright white wedding dress. Before she gets to knife her enemies in the heart or claim their severed limbs, she must lose her husband-to-be and her unborn baby. Only this sort of loss—and not, say, a simple dream of acceptance, a quiet life on her own terms—merits such a violent revenge. 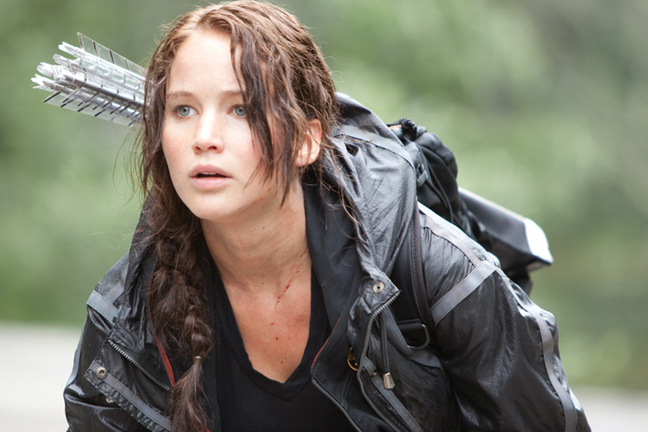 Katniss' first kill in the arena is the boy who spears the tiny, helpless (and in that moment, literally ensnared) Rue. The other tribute girls, the ones who just want to save their skins, are seen as suspect, not as dignified as our heroine, not as worthy of survival. Beatrix Kiddo may be a woman, a killer, but she kills, at first, for her lover; and then in her daughter's name. O-Ren, the master assassin who becomes a Yakuza queen for the wealth and power alone, is the villain. This "strong female character" is considered a hero (or at least worth rooting for) if her mercenary bent is smothered in maternal intent.
Advertisement 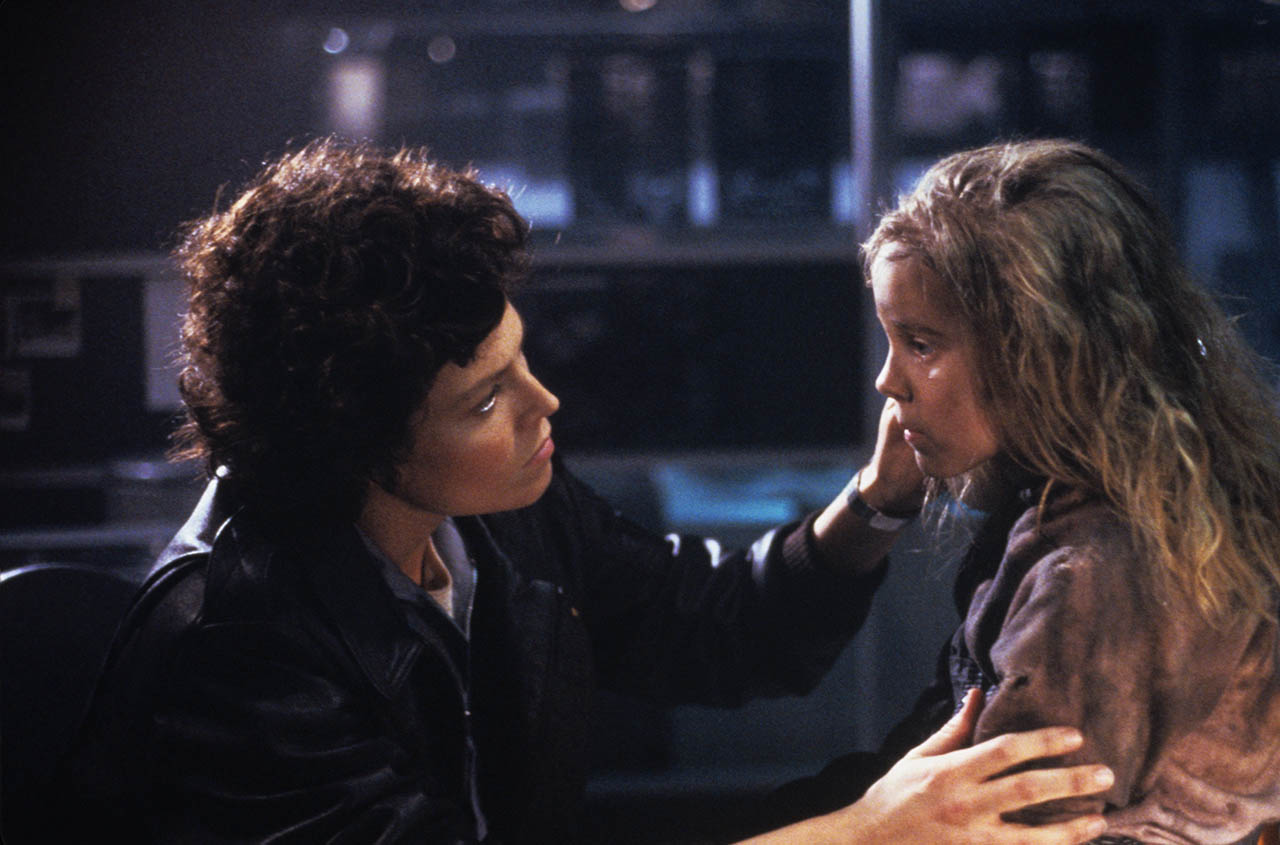 Even the spiritual godmother of the archetype, Ripley, is presented as "the good mother," the guardian, in opposition to the "bad mother," the monster. Margaret White is just as savage and strange as the alien queen. In the 2013 version, Margaret's madness is a sere terrain, a place that Carrie seems destined for if she doesn't sink her heels into stronger earth. That's why normalcy of a suburban prom night feels so redemptive: "I have to be a whole person before it's too late," she says. 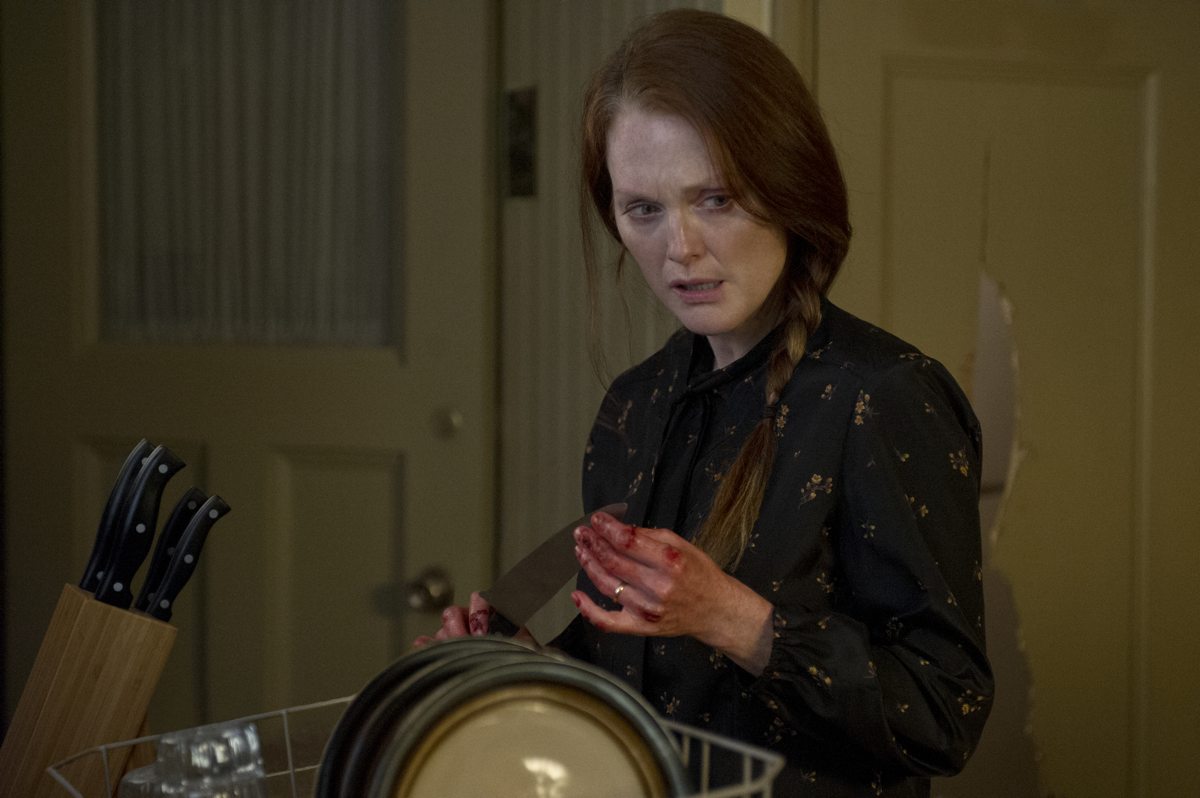 For many "strong female characters," personhood is bound up in motherhood, or an identity as a protector. Ripley's victory is predicated on her surrogate child's survival; it's ultimately not in service to herself. She never cries out, "Stay away from me, you bitch." Carrie must slay her own monster, the woman who should've protected her and prepared her for the world. In Peirce's film, this final brawl is a brutal choreography of their bond: Margaret tries to hold her down while Carrie tries to claw away. Carrie kills her mother in an act of self-defense that can't really be called a victory, at least not in a traditional sense—and yet, for a moment, Carrie looks up at her mother's knife as if she's electing to let go, let the blade fall to her throat. But in that moment, she chooses herself.

Of course, her story doesn't end with a return home or a tearful reunion, with bad guys slain so the world can hum along peacefully. If she were a more conventionally "strong" protagonist in a more conventional superhero movie, Carrie would've chosen to live so she could redeem herself, and use her powers for the greater good. But the greater good doesn't factor into what she wants. She's been hurt all her life, and she doesn't owe anyone anything. Her unhappy ending is still on her terms. Her call to action is not what she can do for others; it is a rage that comes sizzling out of the dark. 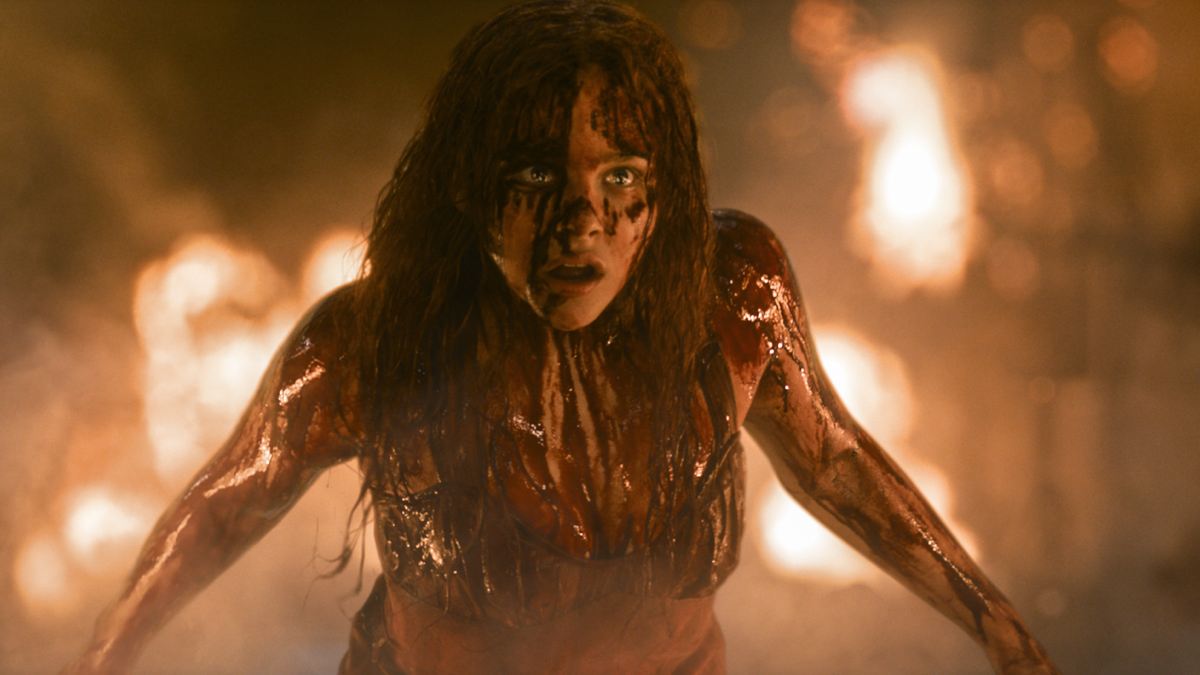