The Return of Peter Cushing: Another Look at an Underrated Career

I liked “Rogue One: A Star Wars Story” very much, but one decision I was utterly not on board with was the one to have Peter Cushing reprise his role as Governor Tarkin despite the inconvenient fact that he died in 1994. Leaving aside the ethics of the situation, the finished effect was wanting. “Rogue One’s” Tarkin remained firmly entrenched in the uncanny valley. And to add insult to injury the actor they got to voice him didn’t sound a thing like Cushing. But I’m choosing to view this as an opportunity to shine some light on one of my favorite actors. Cushing left behind an incredible body of work, especially for genre fans. And there’s no time like the present to get acquainted with it.

1957’s “The Curse of Frankenstein” would cement Hammer Films’ reputation as a purveyor of classic horror films, and it’s due in no small part to Cushing. Here is where Cushing defined the Platonic ideal of The Magnificent Bastard. His Baron von Frankenstein was proud, arrogant and secure in his intelligence to be absolutely ruthless. When his lover becomes troublesome, he has no qualms siccing his creature (a silent, eye-catching role for Christopher Lee) on her. He feels that morality and ethics are the concerns of those without the wherewithal and brains to build secret laboratories to practice reanimating life in. In the loosely connected sequels, he would put interesting spins on the character. 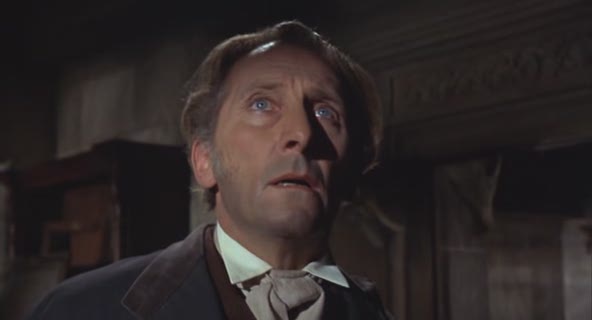 In the third film, “The Evil of Frankenstein” he’s not quite as merciless, which makes his rounding up and managing of a family of outcasts all the more unsettling because the threat of its dissolution is balanced on when Frankenstein no longer needs them. Frankenstein's cruelty become outright sociopathic in the fifth film, “Frankenstein Must Be Destroyed.” It’s easily Cushing’s most terrifying performance, coolly tasking the woman he just sexually assaulted to put on some coffee as if she doesn't matter; nothing matters in his relentless pursuit of creating life in his image. After an ill-fated attempt to relaunch the series with a younger actor, the ever sodden Ralph Bates, Cushing returned for the final film in the series, “Frankenstein and the Monster from Hell,” which is an uneven effort but worth seeing for Cushing. In this entry, it would appear the jig is up for Frankenstein; he’s been sent to an asylum. When the younger protagonist succeeds in finding out where he’s being held, he gets there to discover, what else, that Frankenstein is secretly running the place. 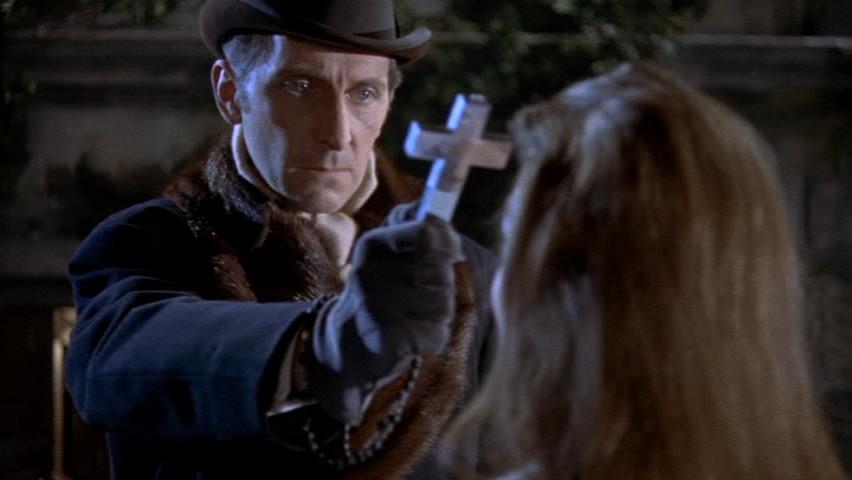 A year after “The Curse of Frankenstein” Cushing displayed his versatility as the heroic, morally upright Abraham Van Helsing in “The Horror of Dracula.” Observant, considerate and brave, he was everything a filmgoer would want in a vampire hunter. It’s a thrilling moment when he flashes the silver crucifix at Dracula (Christopher Lee, beginning his tempestuous relationship with the role.) The music crescendos as the vampire writhes in agony. Cushing would return in the Lee-less first sequel “The Brides of Dracula,” which is one of the most beautiful and sensuous films Hammer ever made. Cushing’s warmth as Van Helsing, the very opposite of Frankenstein’s frost, comes through in what has to be one of the gentlest vampire stakings in film. He approaches the terrified woman, unwillingly turned by her own son, and assures her he means only to release her from her torment. She realizes he has come to help her find the death she wants and submits willingly. Cushing would play a grandson of Van Helsing in “Dracula A.D. 1972,” which is terrible, albeit delightfully so. And he is about the only thing to recommend in the utterly exhausted “The Satanic Rites of Dracula." He heads up a paranormal bureau in the British government, intriguingly like a proto B.P.R.D. from the Hellboy comics, and looks after his staff with a paternal eye. The business with the actual office work of vampire fighting makes me wish we’d gotten a TV series of Cushing solving various paranormal mysteries. 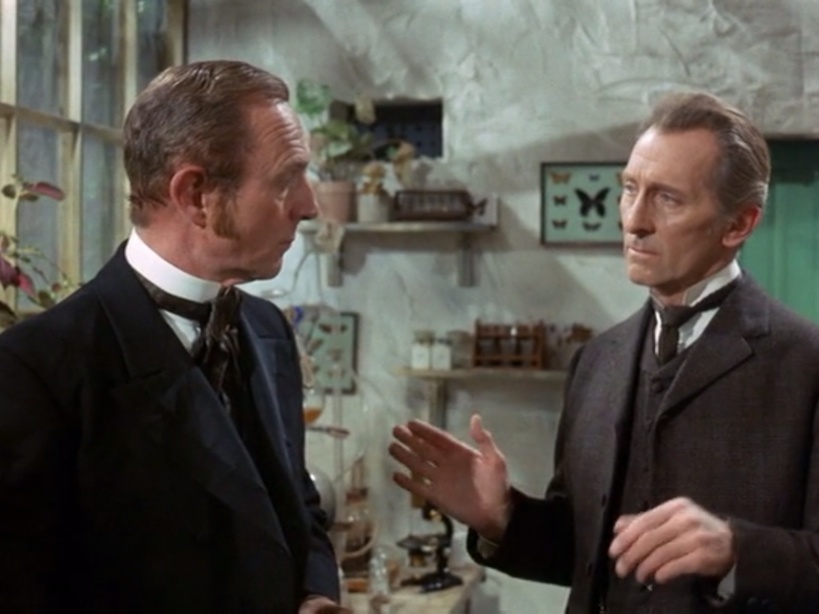 Before “Ths Satanic Rites of Dracula,” Cushing had plenty of practice in not only being the best part of desultory pictures but making them seem a good deal better than they deserve. In no film is that alchemy more apparent than “The Blood Beast Terror.” The film is both as goofy and not nearly goofy enough as its premise would suggest. In a quiet English village, the locals are being set upon by monster attacks. The culprit turns out to be the daughter of the local mad doctor. She transforms nightly into a gigantic, vampiric, were-moth. (Whether the mad doctor turned his daughter into a were-moth or has a were-moth posing as his daughter is unclear.) Rather than simply hit his marks and collect his paycheck, Cushing turns in a solid performance, the type you expect from a certain generation of British actor. This story may be ridiculous tosh but they’re going to treat is as if it’s Ibsen at the Old Vic anyway. Cushing solves the mystery, confronts the real culprit, and is there to rescue the heroine from the requisite burning laboratory climax.

Cushing’s later work is just as interesting. Devastated by the death of his wife, which in a year turned him from svelte middle age to a gaunt old man, he took work as a way to keep his mind occupied. One of his most interesting roles was the self-appointed witchfinder general of “Twins of Evil." If Van Helsing was tempered by his faith and the humility of the things he did not know, Cushing's puritanical leader is the toxic faith that sees doubt not as the beginning of faith but as the opposite and enemy of it. Cushing’s certainty that he speaks for and enacts the will of God is such that he sees no problem with summarily condemning women to burn at the stake for the crime of walking home alone at night. His religious fanaticism drives one of his nieces into the arms of the local aristocrat, who is also the local vampire. Soon, Cushing must deal with a plague of real monsters and not the ones he imagines lurking in other people’s secret hearts.

“Twins of Evil” is of a piece with late Hammer films. Either they were very bad (the aforementioned “Dracula A.D. 1972”) or, like this one, very good. And there are no heroes or villains in this story. Just people who cling to belief systems at all the wrong moments, and who are incapable of talking to and understanding each other, which inevitably leads to bloodshed. Cushing never looks so horrified at a vampire as he does at the realization that he might actually be … wrong … about something. 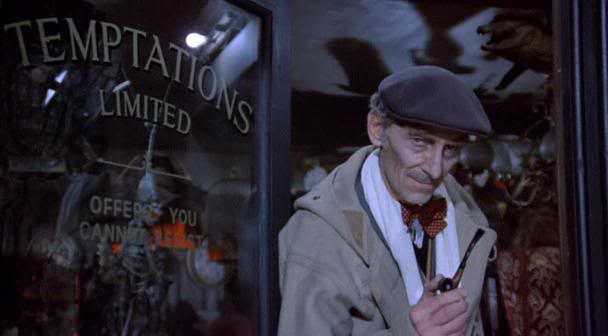 Cushing also had a neat part in the wrap around segments of one of the best seventies horror anthologies "From Beyond the Grave." The proprietor of an antique shop of cursed objects, he wore a newsboy cap and spoke in a peat-thick Yorkshire brogue as he merrily led his customers to be undone (or not) by their own greed and selfishness. Cushing gave one of my personal favorite performances in “At the Earth’s Core,” an adaptation of the Edgar Rice Burroughs novel that saw two explorers find a secret world underneath the Earth’s crust full of dinosaurs, telepathic bat people, and comely cave girls. As the dotty sidekick of Doug McClure, there isn’t a line delivery from Cushing that can’t be described as "flustered" Playing what could almost be described as Extreme British Man, Cushing is excitable, funny, and the kind of resourceful gent that can instantly transform his umbrella into a rudimentary bow. He also gets the film’s best line, indignantly crying out “You can’t mesmerize me, I’m British!” It’s the kind of line and delivery that turns you into a B-movie fan for life, and turns actors like Cushing into old friends you’re delighted to see again when they pop up in something.

Cushing had a long, varied career that stretched from stage and radio to film and television. He was never less than watchable and often a good deal better than the production around him. He was so much more than his "Star Wars" character Governor Tarkin, even as he left an indelible mark in his brief screen time. Serving up the epitome of hubris when told they might want to evacuate their battle station, he replies: “Evacuate? In our moment of triumph? I think you overestimate their chances.” He is a very-much-missed presence in the movies for me. And while I question “Rogue One’s” methods of reintroducing him to the public, I am grateful for an opportunity to talk about him. He was a fine actor, and never showy. He simply gave performances you never forgot.