The Ragged Charm and Undeniable Greatness of “Chimes At Midnight”

In the late fall of last year, I had the privilege to review Jacques Rivette’s early ‘70s marathon motion picture “Out 1: Spectre” for the New York Times. Because of the one-time scarcity of materials and screenings, this nearly 13-hour-film had gained a reputation as a cinematic Holy Grail; its upcoming worldwide release in varying home video formats this year will render this masterpiece a non-rarity, finally. That this brings displeasure to some elitists is not a topic for this time. What is germane is that many other cinematic Grails still await discovery. For many years, Orson Welles’ last fully completed fictional feature, the 1966 picture titled “Chimes At Midnight,” and alternately, “Falstaff,” has been frustratingly difficult to see—and more frustratingly difficult to see in a decent-looking, decent-sounding version.

The reasons for this are so sufficiently labyrinthine that one would require a book to contain them. 2015 saw the publication of a pretty good book by Josh Karp about the last uncompleted fictional feature by Welles, “Orson Welles’ Last Movie: The Making Of ‘The Other Side Of The Wind’,” and that story is quite a tangle itself. So I’ll beg my readers’ indulgence in not getting into the difficulties “Chimes” found itself in after premiering at the Cannes Film Festival in 1966 and getting a brief New York run a year after. Contrary to contemporary mythmaking, the movie did not garner universal pans when it played in the U.S. metropolis; yes, the New York Times’ Bosley Crowther complained that is was an unseemly and incongruous patchwork of Shakespeare, but Pauline Kael praised it nearly to the heavens—albeit with a substantial reservation—in The New Republic. 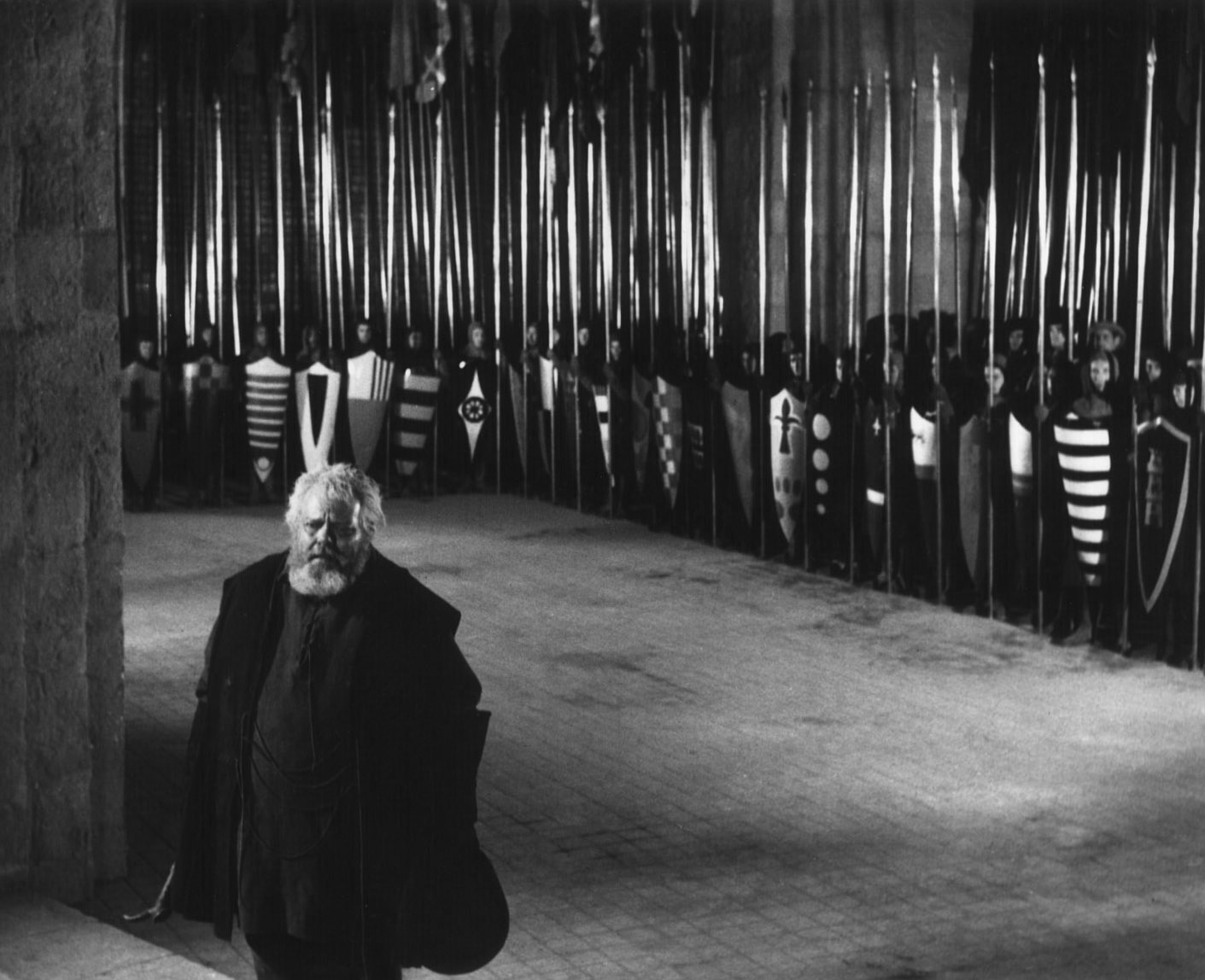 About that Shakespeare patchwork: it’s one of the things that make the film great. Rather than adapt (and by commercial cinema convention necessarily condense) a single Shakespeare work, as he did with his backlot modernist “Macbeth” of 1948 and his on-the-run-in-Venice “Othello” of 1952, Welles, harking back to the theatrical productions he concocted with teacher and friend Roger Hill as a private-school prodigy in the 1920s, concocted a stand-alone scenario centered around the larger-than-life tragicomic figure John Falstaff, cutting and pasting “The Merry Wives of Windsor” and both “Henry IV” plays, putting ostensible comic relief on center stage. The now portly-to-say-the-least Welles had finally, at age fifty, ripened into Falstaffian dimensions and so took the part. Shot in Spain in glorious black and white (Edmond Richard, who had shot Welles’ “The Trial” in 1962 and would go on to lens Luis Buñuel’s final films, was the cinematographer), on provisional locations and with post-synchronized dialogue, the movie is an incredibly dynamic piece of filmmaking that is also in many respects kind of threadbare. Which is to say: there are apparent limits to how decent looking and sounding a version there will ever be.

Kael’s laudatory review begins and ends with blunt complaint. “You may want to walk out during the first twenty minutes of Falstaff. Although the words on the soundtrack are intelligible, the sound doesn’t match the images.” She’s not wrong. The dialogue was not recorded during shooting, and as became Welles’ practice during much of his latter filmmaking career, the director himself put on different voices to dub some of his actors. Note that Fernando Rey, the Spanish-born actor who plays Worcester, speaks in tones with no Spanish accent; Welles is dubbing in his part. (This approach would not do for John Gielgud, the unmistakably-voiced master who plays Henry IV.) Kael later complains about cutting that seems to want to camouflage the dubbing issues; I find this point an arguable one.

Welles’ vision of Shakespeare was never a stodgy one, and even when making a period film his style gloried in a kind of modernist abruptness; through cutting, Welles always makes the material’s pulse speed up to potentially dangerous levels. The cut from Welles approaching his temporary bed to a shot of Jeanne Moreau’s Doll Tearsheet sitting up on the mattress and lowering her blanket to address him would remind one of an edit in a French New Wave film, had Welles hadn’t been doing the same kind of cutting since even before the purposefully jagged “The Lady From Shanghai.” 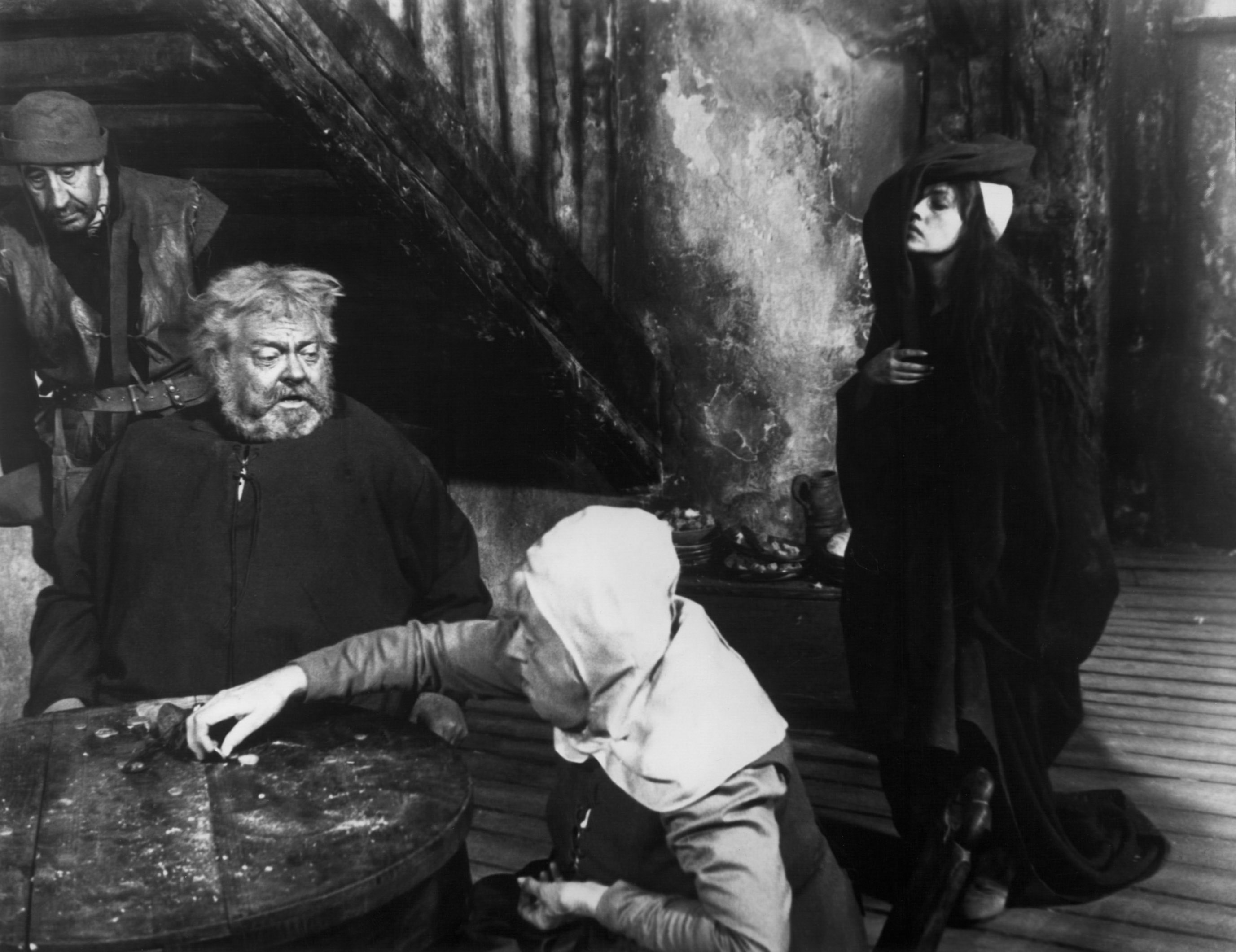 At the end of her review, after rightfully lavishing praise on the movie’s incredible Battle of Shrewsbury sequence, Kael laments, “[B]ecause of technical defects due to poverty, Shakespeare’s finest Shakespearean production to date—another near-masterpiece, and this time so very close—cannot reach a large public. There ain’t no way.”

And there, in a sense, has been the rub. Contemporary viewers have been largely unable to really assess the extent to which the undeniable poverty of Welles’ production compromised his vision. Because the only easily-viewable versions of the movie were further compromised by broken-down prints, overly-duplicated prints (the takedown to 16mm was not kind to the picture), and home-video versions struck, unauthorized (and matters of authorization are also in substantial turmoil), from inferior materials. Four years ago, on my own blog, I rated no less than three different DVD versions of “Chimes/Falstaff” and even when the picture and sound reached acceptable levels, the stories behind the releases, as the comments testify, were not entirely attractive. (See here) Some time last year, the U.K. based label Mr. Bongo released a region-B locked Blu-ray of the film in a supposed “50th Anniversary Restored Edition.” Up until recently it was indeed the best looking and sounding version I’d yet encountered. A supposedly pristine print turned up in what some would consider an unlikely place: the archive of Distribpix, an “adult” motion picture concern that originated in the early days of porno chic (a safe-for-work blog post in which the company’s majordomos describe the discovery is here, complete with mouth-watering frame captures). And now, Janus Films, the distributor of classics that’s now a sister company of The Criterion Collection, is screening “Chimes” at various boutique cinemas across the country, beginning with New York, L.A., Portland and Fort Worth this month, and spreading out over February and the spring. I have not been able to do any side-by-side comparison between the Janus version and the Mr. Bongo Blu-ray. Based on impression and memory, I can say the Janus looks as good if not better than the Mr. Bongo addition, but the aspect that made the biggest impression in the Janus version was the cleaned-up sound. Dialogue that sounded muddied or muffled in prior versions is clear, and the overall mix seems to have been smoothed out so that incongruous peaks and valleys aren’t audible anymore.

So is the Janus version the Grail that I and others have long sought? It might seem so. Still. The Janus website for the film has no information regarding sources and restoration. And I’m still curious about whether the print in Distribpix’s possession is ever going to be available to preservationists and/or restorers. In the meantime, though, the Janus “Chimes At Midnight” reveals this late work of Welles as not a near-masterpiece, but a genuine one. It’s funny, heartbreaking, awe-inspiring, bracing. Welles was not deceiving himself when he spoke of it as the film that he hoped would gain him admission to Heaven.