The Power of Fear: Reflections on "Pan's Labyrinth"

This piece was originally published on December 7, 2016 and is being republished for Women Writers Week.

It was two weeks after the election and I was walking the National Mall with my boyfriend to see “Arrival” at the National Air and Space Museum. We passed groups of students and tourists chattering in a multitude of languages. We passed children giggling on the carousel in front of Smithsonian Castle. We passed three Black women and Jehovah’s Witnesses, who were handing out magazines. A perverse nostalgia for the apocalyptic cult in which I was raised seized me and I stopped to ask for one. One of the women handed me a Watchtower with a pleasantly surprised smile and I went on my way. As we were about to reach the museum steps the weather turned in that sudden way late fall has and we were nearly taken off our feet by a gust of wind. It darkened the clouds and the slivers of blue sky faded to a dull bronze. And then the Fear came again.

The all-encompassing fear that has been at the back of my mind since the early morning hours of November 9th howled down. I wanted to kneel on the museum steps and sob. Sob for myself, for my country, for the women who had given me the magazine, for the children riding wooden horses with bridles painted gold. I am terrified of the beast that revealed itself that day and in the days since. The parade of hatred from people all too visibly going “at last." Those who savor every hurled epithet and hate crime like a bon bon they’ve been deprived of for too long. I stood on the steps shivering and wanted to hold all the people we’d passed in my arms, keep them safe, and hide them from what’s coming. And then I remembered a movie, one with lessons that I hoped to never apply so literally in dealing with the gathering shadow of fascism. “Pan’s Labyrinth” had saved my life several years before so I could only be grateful it had the power to do so again.

I was not in a good way when I first saw “Pan’s Labyrinth,” in the early spring of 2007. My bi-polar mood swings had left me with scattered piles of paper that did not materialize into finished projects. I had a string of failures in attempts at college and employment at dead-end retail spots which would last until my self-sabotaging behavior would finally have its way and I’d start missing shifts for the hell of it. I remembered a young woman who looked like me who had wanted to see the world and write and make movies. The colors around me had faded and I’d only had what came in the mail from Netflix or a trip to the movies with my dad to look forward to. I don’t remember why exactly I went to see “Pan’s Labyrinth” by myself that afternoon. I knew its director, Guillermo del Toro, had done “Cronos” and “The Devil’s Backbone,” but those were movies the young me had watched, the one who devoured books and magazines and kept running lists of movies to track down at the library and video stores.

I settled in to watch "Pan's Labyrinth." When the end credits finished rolling, I walked into the lobby, bought a ticket for the next showing, and walked back in. I would have seen it a third time but that was the last showing of the day. On my way home, I stopped by a drugstore and picked up a notebook and spent most of the night writing in it. I wanted to get it all down, everything the movie made me feel. I wanted to remember the colors. I was drunk on them. The ripe reds of blood and royal robes. The blue chill of death and the gloaming that connects the worlds of mortals with the magical underground. The mineral greens that kept popping up in places like a dress, the tree trunk-like torso of a creature, and insect-like fairies, tying them together as emissaries of the natural world and its ancient magic. How green drew a circle around the heroine, protecting her from the industrialized violence of warfare and fascism represented by her monstrous stepfather. I had woken up and I wanted to cry for what my life had become, but I didn’t want waste tears on self-pity. I had a lot of books and writing to catch up on. 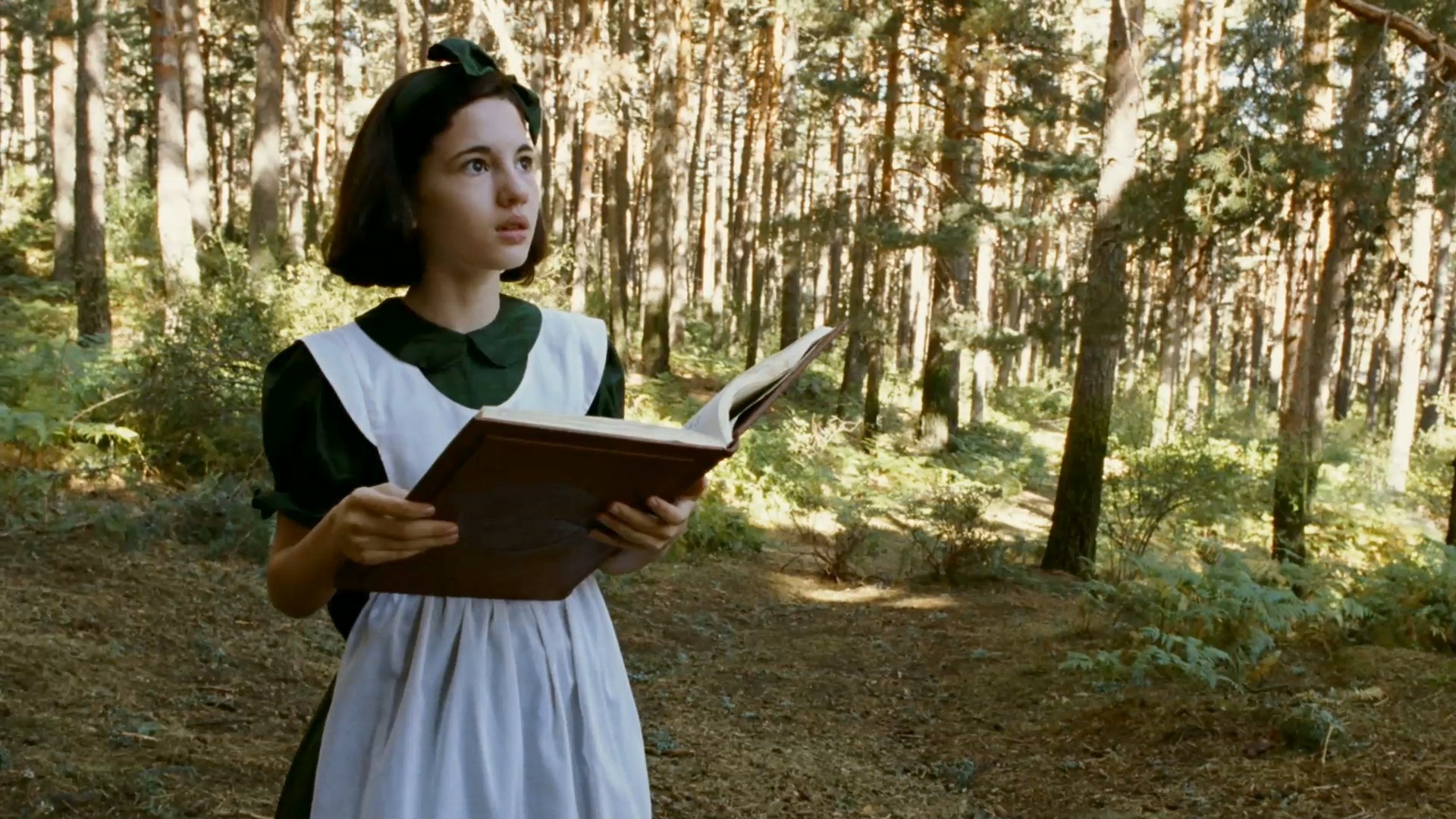 It’s the seemingly simplest stories that can transform you the most. The genius of “Pan’s Labyrinth” lives in the elegant construction of its fable. Once upon a time, there lived a young girl named Ofelia (Ivana Baquero). This was during the time of the Spanish Civil War and she and her heavily pregnant mother (Ariadna Gil) are going to meet her stepfather (Sergi López) in the country. Her stepfather is an officer in Franco’s army, and while he keeps busy torturing local rebel fighters, Ofelia explores the woods around the estate. Ofelia stumbles across the ruins of a mysterious stone maze. There, a Faun (Doug Jones) recognizes her as the long-missing Princess Moana. She is to complete a series of tasks before the next full moon. If she fails, she will be unable to return to her underground kingdom.

I had led myself to believe that my old self was dead when she was just resting until she was needed again. “Pan’s Labyrinth” is full of images of birth and rebirth and the coming changes of puberty as Ofelia is on the cusp of young womanhood. It’s a film about the power of claiming your own narrative rather than the role society, mortal or magical, would force on you. It’s a film about how the stories we tell can make sense of the senseless. Joan Didion wrote, “We tell ourselves stories in order to live.” Del Toro’s wisdom is in showing that we tell ourselves stories in order to die too; to try to approach death without fear, or at the least with an acceptance that flows back to living our lives with purpose. That we are not helpless and seeking one stimulus after the other to distract ourselves from the nightmare around us. Del Toro’s princess saves herself and learns the vital lesson to always question, to refuse to follow orders out of cowed obedience, even as the lesson costs her deeply. The most important ones always do. And yet their rewards are almost as great. The stories we tell matter. 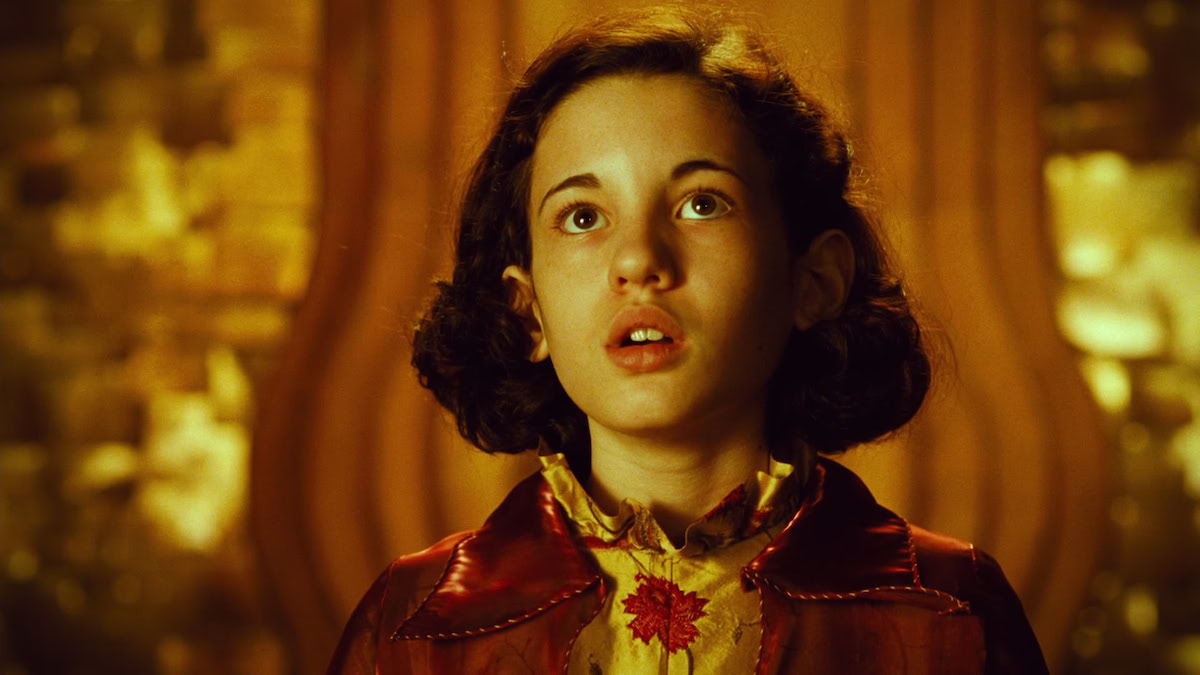 And yet I know stories cannot save my life from the harm others do. Stories could not save Ofelia’s life in the end, even if they gave it meaning and purpose. And in these awful times there is more than comfort in that, there is power. What I remembered on the steps of the museum is that lesson I learned long ago, that labyrinths are for safekeeping. They are the spaces that wind inside us where we can hide the good parts of ourselves away during times of trouble so they will not be lost, where we can remember a fragment of song or a brush stroke of a painting that moved us and moves us still.

I remembered the details of that walk to the museum, every leaf, every rustle of coats as a group of teenagers ran by laughing, and I hid it in the chambers of my heart. And I went in to see “Arrival,” a story about pressing on even if you know the ending will break your heart. And I filed it away too, in the quiet, cool spaces of my mind—the spaces where moss grows softly and there’s the sound of running water. These are places no madman, no political system, and no hatred can touch. We are not promised “Happily Ever After” by life. Death comes in one form or another. But the importance of masterpieces like “Pan’s Labyrinth” is they can help us shift the terrors of our daily lives into fantasy and then back again, giving us the ability to face them. I remember the shiver that ran up my spine at the first appearance of the Faun in the theater and how unbidden the tang of freshly dug earth came to me. That memory doesn’t make me want to hide from what’s coming, it makes me want to fight. To preserve a world where magnificent stories like “Pan’s Labyrinth” are possible.