The Blinding Light of "Sholay": A 40th Anniversary Appreciation

“Sholay,” by many reckonings the most popular film in the history of India, turned 40 on August 15th, but due to extremely inefficient cultural osmosis, it may remain an unknown quantity to Western filmgoers. Thus, to the rescue, an analogy: “Sholay” is like the sun. It seems as though it has always been in the sky, outshining other, fainter stars half the time. It is, as all things, fair game for criticism, but it's not going anywhere and in any case, it gives life, and its nonexistence is, at this point, unthinkable. 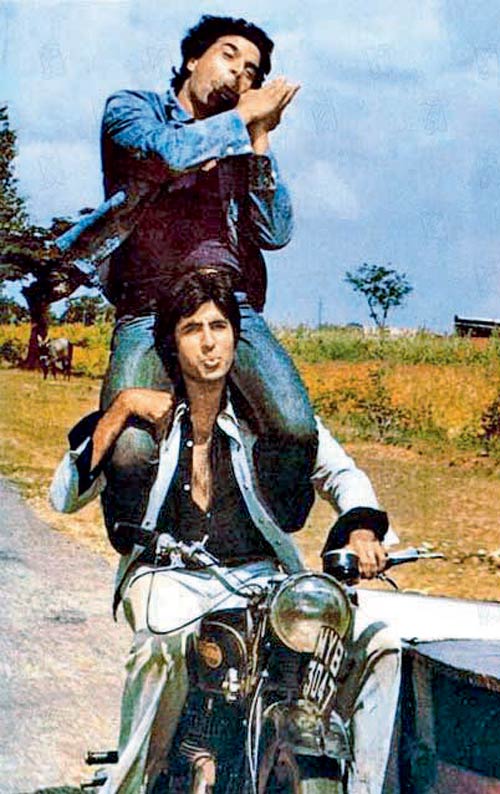 Although sometimes glibly called a “curry Western,” due to director Ramesh Sippy's nods to “Once Upon A Time In The West”-vintage Sergio Leone, “Sholay” really is a prime exemplar of masala, which is to say no one genre, but many at once. This often leads to jarring shifts in tone, as train robbery sequences abut melodrama that leads into slapstick comedy and so on. Considering “Sholay” as the ne plus ultra of masala, it stands to reason that “Sholay” has many such shifts, such as when it takes a break from being an epic-scale action melodrama for what seems like forever to be a wacky prison comedy. But this is part of the deal; there may exist, somewhere, a moviegoer who thought, “man, I really liked it when 'Sholay' stopped all that epic-scale action melodrama and was goofy and funny for an all-too-brief period,” and the whole idea behind masala is: something for everyone.

Another key ingredient is, in a different sense than earlier, stars. “Sholay” has two of the greatest who ever were, as dual heroes: Dharmendra, who was already an established quantity at the time, and the ascendant Amitabh Bachchan, who cemented his icon status here and went on to further assert himself as one of the most compelling cinematic presences to ever exist. Each individually was a giant, but as a pair they possess a deep, vivid chemistry, and “Sholay” dwells intensely and at great length upon their friendship. Sanjeev Kumar, Hema Malini, Jaya Bhaduri (later Bachchan), and Amjad Khan all have iconic moments of their own. Altogether they comprise an ensemble that earns the (only slightly hyperbolic tagline “The Greatest Star-Cast Ever Assembled!” 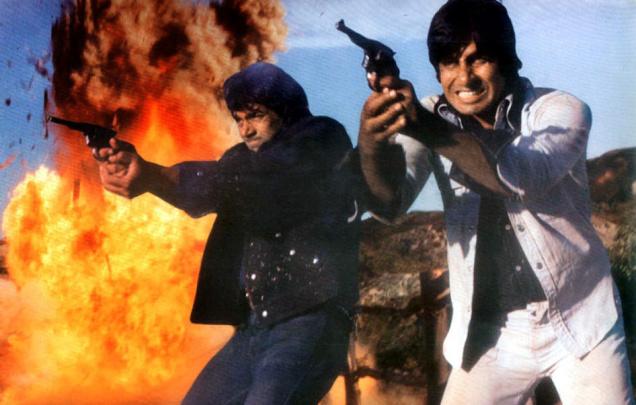 “Sholay” is a film of moments and of sequences, rather than a linear story as such. The logline would be “Sanjeev Kumar, taking no chances, hires Dharmendra and Amitabh to protect his village from Amjad Khan, against whom Sanjeev Kumar seeks revenge” and that's essentially a full plot synopsis, too. But there's the train robbery. The villain foretelling his lackey's doom merely by asking “How many men were there?” Hema Malini's dance to (no exaggeration) save Dharmendra's life. Sanjeev Kumar's shoes. And let us not forget the songs. Never forget the songs.

Unfortunately, at present, it remains a bit of a challenge to see “Sholay” as it was meant to be. The theatrical release ran 188 minutes, the US re-cut a mystifyingly fragmented 162, with Sippy's preferred cut clocking at a robust 204. This cut, while available after a bit of a search, is nonetheless not matted in the way Sippy intended, which was as if it had been shot on 70mm film, in 2.2:1 aspect ratio. This was the manner in which it was exhibited theatrically, in much the same grandeur auteurs like Paul Thomas Anderson and Quentin Tarantino seek today. In short, if ever a film was begging for a Criterion Collection edition, it is “Sholay.”

“Sholay” is a grand, maximalist revel. It's the kind of movie that, while it may pass into the status of so many older movies more talked about than seen, it became that thing by being great. There are many ways to achieve greatness, and the way of “Sholay” is with heroism, villainy, redemption, revenge, true love, and as many stars as there are in the sky. Happy 40th.