LINCOLN CENTER AND BEYOND THE INFINITE: "2001: A SPACE ODYSSEY" WITH A LIVE SCORE IS THE ULTIMATE TRIP 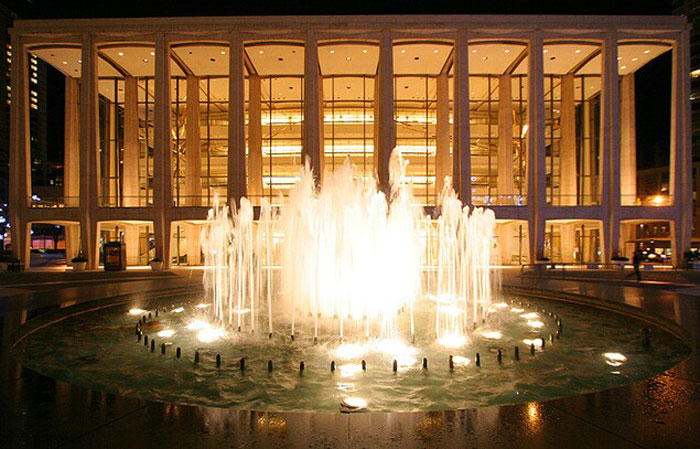 1. THE DAWN OF NERVE

Everything about this evening at Lincoln Center's Avery Fisher Hall had a whiff of brazenness to it. What hubris to think that the music track of Stanley Kubrick's "2001: A Space Odyssey" could be stripped out and replaced by the same classical music played live by the New York Philharmonic, under the baton of Alan Gilbert, as part of the Phil's "The Art of the Score" series!

Then again, everything about Kubrick's film itself is chutzpah-stuffed. The film's most relatable character was a psychotic computer. The only thing resembling a plot was the millennium-spanning, possibly alien-assisted evolution of humankind. When this space epic intended to take viewers "beyond the infinite" was first conceived back in the mid-sixties, much of the technology to visualize it didn't exist, so like Alfonso Cuarón with "Gravity," Kubrick and his crew just up and invented it. For all these reasons and more, "2001" was arguably the most artistically risky film in American studio history.  Also arguably, it only broke even at the box office because the late-'60s movie audience included a fair number of people who liked to look at glowy things while they took drugs.

But even within the context of its damn-the-torpedoes-full-Art-ahead genius, Kubrick's late-hour decision to dump Alex North's more traditional score in favor or a quirky mélange of light classical favorites and beyond-atonal modernist pieces represented a radical break with science fiction film tradition—or any film tradition.

Of course, tradition obviously didn't weigh heavily on Kubrick's mind. "2001" wasn't merely the LSD-analog 'ultimate trip' promised at the time, but a sensual, opium-float of a film. Its aesthetic was typified by its long, long takes of, say, a Pan Am shuttle docking between with a mile-wide, Ferris wheel-like space station, scored to Johann Strauss II's' "An der schönen blauen Donau (On the Beautiful Blue Danube)". It exists for sheer, languorous pleasure, and for the surprise of finding high beauty in a movie genre which, before "2001," was considered low art.

Eschewing the Hollywood tradition of dicing up familiar classical works and only using 'the good parts,'  Kubrick used whole compositions or movements, and edited his film to fit them. The whole point of using, for instance, Aram Khachaturian's slow, melancholically glacial and gorgeous "Gayne Ballet Suite (Adagio)" was to call attention to how little was happening in a scene about the endlessness of endlessness. (Eighteen years later, "Aliens" would achieve a similar effect by using an edited version of this piece.) 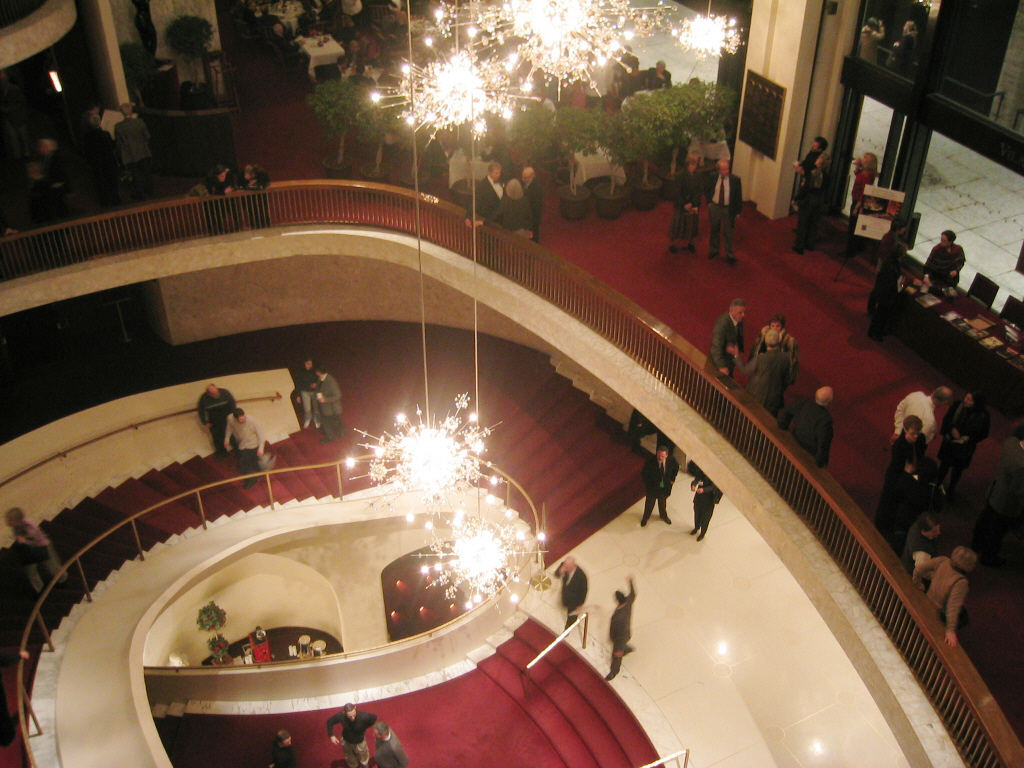 Lincoln Center, home of New York City's highbrow this, that and the other, was a natural place for the music.

But to mix it with cinema? Even in the more utilitarian but still high glam, 2,738-capacity Avery Fisher Hall?

It was a weird crowd, even by deep New York standards, a saucy mélange of one percenter couples cheek to jowl with Comic Com'ers, SF peeps, film nerds, goths in…goth stuff, and everyone from everywhere. They'd all come to worship in a Lincoln Center that, with its glass and white walls and hanging 'futuristic' Swarovski crystal, already felt like a leftover set from "2001."

On the stage were one hundred or so players beneath a huge screen.

About four floors about ground level and off to the left were the chorus. The main reason for their weird location, I believe, was to cause their voices to sort of float like around, like lost ghosts or fog, and generally creep you out. If anyone here were on acid…Bad idea, dude.

My partner and I took our seats and kept up brave faces while deep inside, I was seething with worst case scenarios, most of them having to do with technical gaffes and the whole thing turning into a sort of super high class karaoke, a disaster in tails and ties.

You could feel the thrill of excitement at the first sight of "2001"'s stylized 1968 MGM logo.

From the ominous/triumphant low-note open of Richard Strauss' "Also sprach Zarathustra's" all the way through to that triumphant three-note horn run, the air was absolutely electric with the shared thrill of thousands of members of the same tribe all jacked into the same invisible "2001" channel.

And when that title card hit the screen?

It was "Beatlemania" for adults.  Avery Hall shook and rattled as the orchestra muscled through those famed, final chords to the crashing, exultant, living crescendo as "2001" pulled a full-blown Lazarus on that final tonic, and viola!

The applause was deafening.

Part of my me—the part that never has any fun—said, 'By all rights, again, this should be crass middlebrow high-class kitsch karaoke.'

The rest of me reasoned: "But dude, the sheer conglomeration of it all, the genius of the images and their subtexts and contexts and the greatness of the musicians and the timelessness of the music kind of scrunched normal classifications. And look how happy everyone is!"

The rest of me won the night.

Key here is the transaction between musicians seen and heard, and the film itself—and the way that dynamic plays with the age-old sell of the movies: that it's communal, a group experience.

In this very particular type of group experience, we get to watch others (the musicians) watch cinema.

In so doing, they become our stand-in reactors—avatars we can watch doing what we feel.

It's eerie, this process.

I found myself favoring one viola player in particular who seemed to react the same way I did to key scenes; I'd wager most people did their version of this. It's a human thing and I didn't even know I did it until I witnessed this performance. Remarkable.

When live musicians live-score a movie in this way—when they aren't scoring a silent film, but performing music intended to fill the gap where recorded music would otherwise have been—there are all kinds of living dynamics in play. When, during this communion, our avatars pick up their instruments to join the film, it's like "The Purple Rose of Cairo" in reverse. It's weird. It's pleasurably submissive, and I don't even swing that way.

The point is, this event makes us engage with "2001" in anything but a passive, film student/viewer way.

Everything about tonight is lively.

Everything about tonight is active.

Even silence is something you do.

Or rather, don't. As effective as the orchestra's wall of sound is Kubrick's use of absolute silence: airless space as death, Dave (Keir Dullea) negotiating that space with no score save his ragged breathing.

The orchestra members respected this silence: it was, of course, part of the score.

You forget the sonically invisible spark that hundreds of silent people create in today's theaters of babble, the way that energy crackles.

4. LIGETI AND BEYOND THE INFINITE

After the mission to Jupiter and the monolith fails, Dave shuts down the murderous Hal (Douglas Rain) and goes back into space and then "beyond the infinite." At this point in the performance, Gilbert, unable to mimic whatever electronic processing was used in the film on György Ligeti's dark, dissonant "micropolyphony" compositions, instead goes for a natural ghostly dissonance that floats and echoes from that eerie chorus on the fourth level of the hall.

There's looseness between Kubrick's still eye-popping kaleidoscopic third act freak-out and the way this math-heavy atonal score is played. The result feels like a fluid duet between orchestra and film.

After that final psychedelic spree—after the transcendent segue from ancient, dying Dave to newborn starchild looking down on a glowing Earth—I caught a glance at Gilbert in the light of his podium and saw his face glowing with kid-like glee as he threw caution to the wind.

As the audience rose to its feet, he gave us a for-the-ages version of "Also Sprach Zarathustra."

As the evening crashed to a three-standing-ovation-end, I realized that the last thing I'd ever expected to happen had happened: the live-accompanied Lincoln Center version of "2001: A Space Odyssey" now seemed to me the definitive version of "2001"—the ultimate trip.