The Ebert Club invites you to enjoy the B-rated cult classic "Teenagers from Outer Space" (1959). And please join the Club to explore an eclectic assortment of discoveries. Your subscription helps support the Newsletter, the Far-Flung Correspondents and the On-Demanders on my site. - Roger Ebert 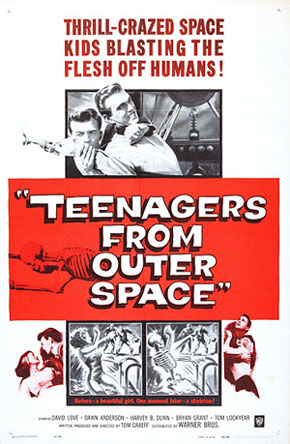 Teenagers from Outer Space (1959) Directed by Tom Graeff. Starring David Love, Dawn Bender, Bryan Grant, Harvey B. Dunn, Tom Graeff and King Moody. Synopsis: a team of extraterrestrials arrive on Earth in a space ship. They've been searching the galaxy for a planet suitable to raise their herd of "gargons" - a lobster-like yet air-breathing creature, and which is a food staple on their home-world. The crew of the ship includes teenagers, two of whom oppose each other in their activities.Notes from Wikipedia: The film was largely the work of a single person, Tom Graeff, who, in addition to playing the role of reporter Joe Rogers, wrote, directed, edited and produced the film on which he also provided cinematography, special effects and music coordination.Cost cutting measures included using old flight suits clearly decorated with masking tape, dress shoes covered in socks and surplus Air Force helmets. Props included a single bolted-joint skeleton re-used for every dead body, a multichannel mixer that the producers made no attempt to conceal (even clearly bearing the label "Multichannel Mixer MCM-2") as a piece of alien equipment, and the infamous dime-store Hubley's "Atomic Disintegrator" as the aliens' focusing disintegrator ray.In an odd move, Director Graeff also pre-recorded some of the film's dialogue for several scenes, and had the actors synchronize their actions with the sound. The score of the film came from stock, composed by William Loose and Fred Steiner - the same score that's been recycled in countless B-movies such as The Killer Shrews and Night of the Living Dead.The film failed to perform at the box office, placing additional stress on an already-burdened Graeff in the wake of law suit by his investors, and in the fall of 1959, he suffered a mental breakdown, proclaimed himself the second coming of Christ, and after a number of public appearances followed by a subsequent arrest for disrupting a church service, Graeff disappeared from Hollywood until 1964 and eventually committed suicide in 1970. - Taken from Wikipedia. Enjoy the movie!

For more thrills and excitement, join the Club!
Advertisement