A black high school student walks home from school at night in an urban setting, carrying a backpack and wearing a hooded sweatshirt. A pair of white police officers pull up alongside him, get out of the car and demand to see the contents of his backpack. They have no just cause for doing so other than, presumably, because he is black and not showing his face. The high school kid, scared and with no reason not to comply, does just that. Maybe he has been through this situation already, or has known friends who have been stopped by white cops with no just cause. In any case, this type of situation has become all too familiar with black urban youth and as the catalyst for some of our nation’s most troubling headlines.

Reinaldo Marcus Green’s short film “Stop” depicts this very situation with realism and no emphasis on which character is in the right or wrong. At first, it seems obvious that what the police are doing is wrong, but Green is wise enough to not let anyone off the hook here. The audience is left to rethink the situation entirely and not come up with easy answers. “Stop” becomes more of a personal character study than an overt political statement as the main character sees his future flash before his eyes.

Green’s film achieves a naturalism that lends credibility to the predicament, almost as though he was recounting a personal experience of his own. The policemen are not made out to be monsters or caricatures (for example, in Spike Lee’s hands, I doubt this would not be the case). As the student Zyric, Keishawn Butler, in his first and only film thus far, is a real find and is smart not to give the audience too much information with his very subtle performance. Green and cinematographer Federico Cesca, likewise, keep everything darkly lit until the film’s final moment.

Coming in at nine minutes, “Stop” is a wonderful example of economic filmmaking that tells a simple story, but leaves plenty for the audience to debate and think about. The police have a job to serve and protect and to enforce the law. At the same time, an innocent high school student should be able to walk home without being harassed in a seemingly random fashion. “Stop” exists in the grey area that is not a cop-out, but an acknowledgement that each separate situation carries with it its own set of complexities that keep the issues from being completely black or white.

First, let’s talk about the film’s title. Do you see it as a kind of call to action or is it simpler than that?

The title "Stop" is a bit of a double entendre—it was simple and catchy, but it also posed a question which I thought was fitting for the film we were trying to make—a film that doesn't necessarily provide answers, but one that asks the right questions and starts meaningful dialogue around an important subject.

Where did the story come from? Did it start with the national headlines or is there a more personal story here?

For me, the story was not necessarily new, but it was something that I thought needed to be told in a way that could open up dialogue around the issue. One that didn't necessarily choose sides, but opened up room for discussions that would hopefully lead to meaningful change. The decision in the Trayvon Martin case was one that sat heavily on my conscience as a filmmaker and a human being—that moment for sure started the dialogue in my own head which eventually led to the script months later. 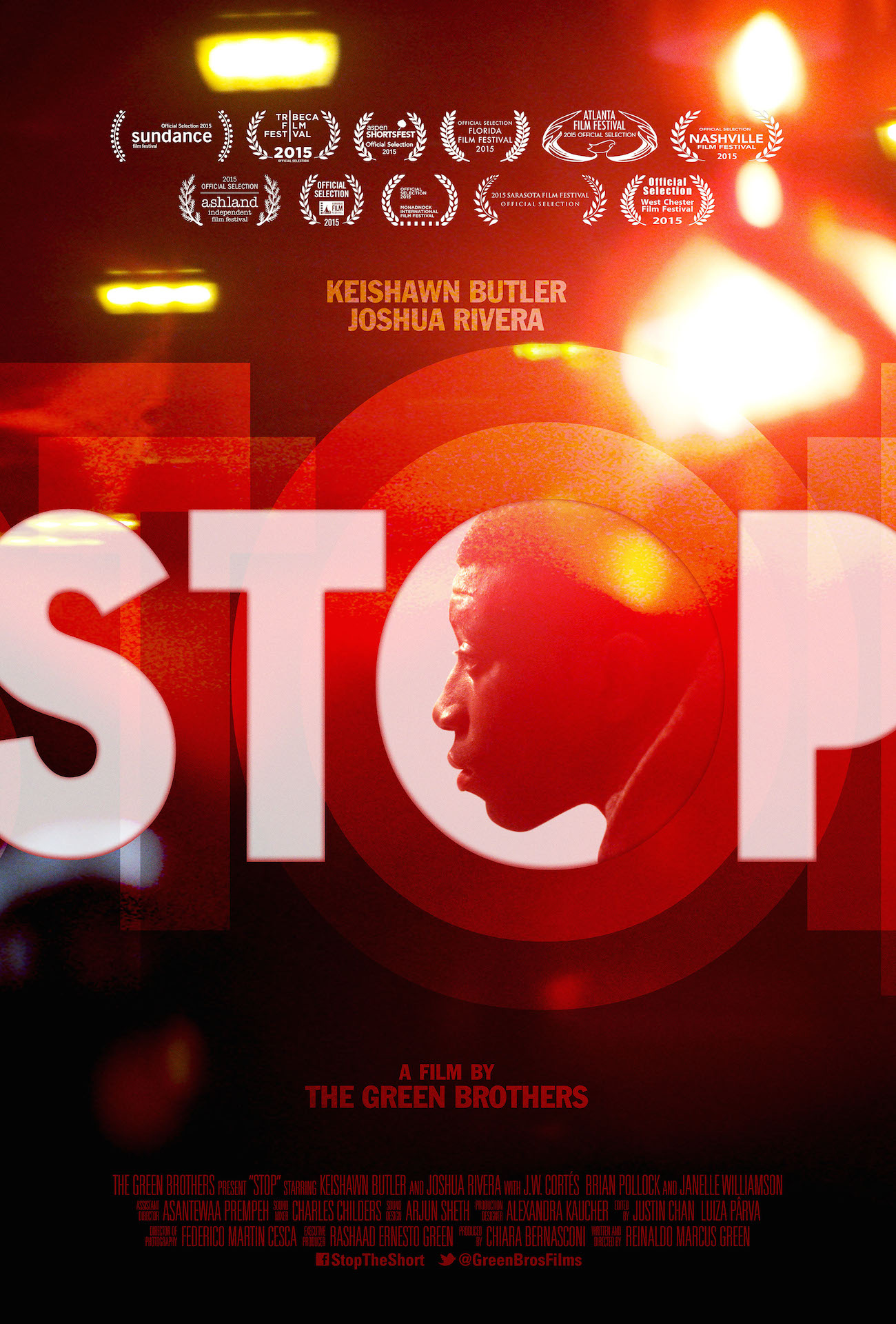 The film has had a lot of success on the festival circuit. What has the reaction been like? Anything you didn’t see coming?

There have been so many mixed reactions to the film, mostly positive, but the one that sticks out the most was during our very first screening at Sundance last year. We screened the film to a packed house in Salt Lake City. I remember not getting one question during the Q&A thinking to myself "Oh man, they must've hated it." But then as I was walking out of the theater, there was a row of people waiting to greet me. One woman tracked me down while crying and shaking. She was Caucasian in her late 40s. She grabbed my arm, looked me dead in my eyes and said, "Thank you. Thank you for making this film. I have a son, he's 17, and that could have been him. I worry about him every day." That moment has stuck with me to this day, and it was then that I knew the film spoke to a wide range of people, defying race and stereotypes, and was just about humanity.

Most filmmakers wouldn’t opt to film at night without a light crew. The story could have easily taken place during the day. What went into that decision?

We had financial restraints but we didn't let that stop us, no pun intended. We have an incredible director of photography, Federico Martin Cesca, who is very skilled at shooting with no lights at night, learning to push the limits of the camera to create something truly cinematic. He's the reason we can see anything, because otherwise I think the footage would've been pitch black. The short was really a film about a kid walking home from practice, and that time frame is evening into night for most high school ballplayers, so we just kept with the realism of the moment, and tried to use any limitation as an advantage. The night created a mood and darkness that we could not achieve with an artificial lighting scheme.

Explain the credit “A Green Brothers Film.” Who is the other Green here?

My brother Rashaad Ernesto Green is a filmmaker and the other half of Green Brothers. He is my right and left hand, and he is heavily involved in all creative things Green Brothers. On this film specifically, he was very helpful in the writing process of the script, from script to screen, and simply put, the movie would've been a different film without him by my side.

I'm developing "Stop" into a feature currently entitled "Monsters and Men," a hyperlink narrative which follows the lives of three protagonists told through three distinct point of views. The film connect narratively and thematically, painting a portrait of modern-day Brooklyn—a community caught in the crosswinds of crime, police corruption, and social instability. [Editor's Note: The film will start shooting summer 2016.]