Gene Morris loved spearhunting so much that he opened his own spearhunting museum—the only one in the world—in rural Alabama. The museum has wall-to-wall mounted animal heads, all of which were killed by Morris and his ex-wife Heather Jean Morris. “He thought it would help hunting,” Heather Jean recounts. “It didn’t help hunting at all. It was an ego thing.”

Luke Poling and Adam Roffman’s “Spearhunter” is a profile documentary on the late Gene Morris, who died of a heart attack while (presumably) setting up his next kill. But his legacy lives on in this museum and hours of old video of him pontificating the importance of spearhunting. He is to the sport of spearhunting what Donald Trump is to, well, Donald Trump. “I’m the greatest spearhunter in the word! Bar none!” Gene shouts into the camera, a true megalomaniac. It became more of an obsession than a hobby and “Spearhunter” chronicles the result of that obsession and its bizarre, enduring legacy.

Poling and Roffman approach the material with an appropriately humorous touch, knowing full well that Morris is a bit of a kook, but a strangely fascinating one. He would fit right at home in an Errol Morris or, even more so, a Werner Herzog film. Yet the film does not insist we laugh at the guy too much. It opens with a quote from Gene himself: “If you’re the only one who does something, you’re the world’s greatest.” Morris went to great lengths to make spearhunting legal in the state of Alabama and went to even greater lengths to get the museum up and running, an act of will and defiance that adds a layer of admiration to his life story, even if it does result in a kind of Temple of Hell for PETA and animal activists everywhere.

“Spearhunter” benefits greatly by having John Kusiak’s score play throughout, giving the film a sense of the absurd that works nicely with Nathaniel Hansen’s static cinematography, in which the subjects pose in rooms and hallways surrounded by their kill. But the most fun contributions come from Heather Jean Morris, whose hindsight of the events she shared with her husband have left her bewildered by the whole experience, while also proudly professing that she now holds the title for “best spearhunter in the world” by default.

Poling and Roffman’s film is the kind of strange and unnerving tale that is perfect for the short film format. A fascinatingly weird place to visit, but you wouldn’t want to live there. 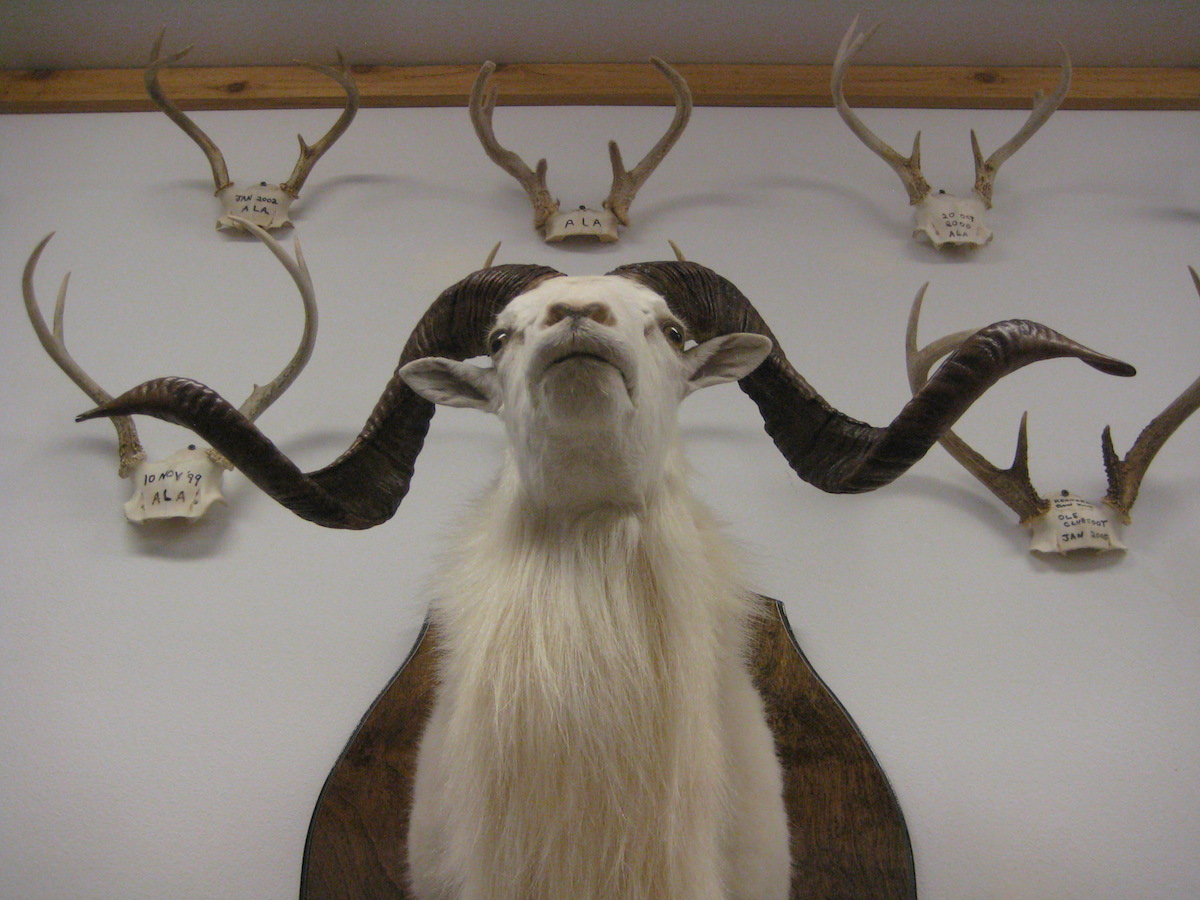 How did you hear about Gene Morris?

ADAM ROFFMAN: In the spring of 2013, my father made the unexpected announcement that he was retiring from a lifetime of living in Chicago and Washington D.C., to relocate to southern Alabama, a place that he had never even visited to my knowledge. After living there for several months, I got an email from him saying he was having a hard time adjusting and asked if I would come visit. So that summer I flew down to Alabama and arrived at night. On the drive to my father's house from the airport we passed the Spearhunting Museum, which even in the dark I could see was covered in a mural of animal heads and a large man holding a spear. I said to my father, "What the hell was that?" and he replied "Oh, some spear hunting museum". I thought "Oh, one of those," and said to my father "Well, I'm not going to see that back in Boston, so we're going there tomorrow." The next day we went back and got a tour of the museum from Carlos Williams, a very engaging character that I thought would be good in a movie. Once I realized on the tour that this museum was all about this guy Gene Morris, and that Gene Morris himself had built the museum, I decided that I had to come back with a camera and make a movie about this. It's not everyday that you come across a story of someone who built a museum dedicated to themselves. Once I got back to Boston I showed Luke the pictures I took in the museum, told him the whole story, and asked him if he'd like make the movie with me. He thought it was just as bizarre and amusing an idea as I did, and saw the potential for it as a film.

I've seen this film with a couple different audiences. One screening, the audience was laughing quite a bit all the way through it. And at another, nobody laughed until Heather Jean Morris said "he just really wanted this museum. So stupid." What has been the general audience response when you've watched it? Do you consider it a kind of comedy?

LUKE POLING: We hoped audiences would find it amusing, and, thankfully, they have. At every screening, the audiences are laughing but it depends on when they'll start getting the joke. Like you said, some have started giggling at the "So stupid," line and at other screenings audiences have started tittering at the epigraph. ("If you're the only person in the world who does something, then you're the world's greatest.") We tried to make sure all promotional material for the movie, from our synopsis to our tag line ("It'll hit you right in the heart ... or maybe in the lungs") conveyed that it's okay to find this funny.

Talk about some of your influences or inspirations here. The static shots are nicely composed, and I feel like this character would fit right at home in a Werner Herzog film.

AR: Werner Herzog's name definitely came up while we were editing the film and Luke and I are definitely fans. I think it's safe to say that he was an influence for this film. The other big influence would have to be Errol Morris. From the quirky subject matter, to the interview framing, to the music. We actually hired John Kusiak, who did the music for Errol's film "Tabloid," to do the music for this film. And while we were doing the interviews, especially with Sharon and Heather Jean, we wouldn't say anything after either of them finished answering their question, and eventually they would just start talking again to fill the space and would more often than not say something that ended up going into the film. That was a technique that we picked up from Errol Morris.

With two of you directing, how do you split the duties? What is the working relationship like?

LP: It's a relationship fraught with name-calling and back-biting. Okay, not really. Both Adam and I have a lot of overlapping influences and had an eerily similar view on how we could best tell this story. On-set we traded off on who conducted the interview, which allowed the other to sit back and take a more macro view of the interview and look at how it fit into our story and then throw in a few additional questions. We found that we got better answers at almost every interview this way. In post, we worked out a rough outline together and then collaborated with our DP/editor Nathaniel Hansen to pull the whole thing together and slowly reveal the events in Gene's life.

How much more footage of Gene did you have?

AR: All of our footage of Gene came from four DVDs that the museum gave us. About 50% of the footage on these dvds included Gene, but as you can see in the film, the video quality in the archival footage of Gene was pretty spotty, and this was the best quality footage they had. In much of their footage, Gene was barely visible through all of the static and wavy lines going across the screen. So really, we ended up using probably about 75% of what was conceivably usable of the footage we had of Gene. Unfortunately for us, we also had to sit through hours of footage of brutal boar killings to find the short bits that we used of Gene talking. And for anyone who hasn't watched the film yet, no, we did not include any actual footage of animals being killed.

Is the museum still in business?  Do you keep in touch with anyone from the film?

LP: The museum is still in business, open Monday through Friday, 8am to 5pm. (Ranked #2 for attractions in Summerdale, AL on TripAdvisor!) Hopefully the movie has inspired folks to take a few hours to visit the museum and see for themselves that we didn't make any of this up. We've shared the film with all of the people in it, but have only heard back from Sharon Henson (Gene's girlfriend) who enjoyed the movie and even did a Q&A for us at SXSW.

LP: Adam and I are working on a follow-up short about a prolific sleep talker, but have put that on hold to collaborate with David O. Russell on a feature documentary on the book publishing industry, which we have been working on since September.

SPEARHUNTER from Adam Roffman on Vimeo.