Synopsis: After the departure of friend and drummer Mortimus, Black Metal bandmates Borknarg and Absu begin to lose hope that Necronomica will ever achieve its place as the most "evil" band in the world.

Imagine Charlie Brown and Linus all grown up, but still with their childlike innocence. Now picture them in heavy goth make-up contemplating whether or not the sight of a burning goat skull during one of their heavy metal shows (sorry, black metal) would compromise their integrity and you have the basic idea behind the endlessly charming Necronomica. The film is a black-and-white, two-character piece about friendship, fear, insecurity and how much compromise is really necessary in order to achieve recognition when doing what you love.

Borknarg (Judd Farris) represents the Charlie Brown figure of the two, the one with doubts that their band, Necronomica, will ever achieve the same level of success that their contemporaries have started to achieve. Absu (Mark Scheibmeir) is his Linus, the optimistic one who has to comfort Borknarg in his moment of doubt. The film spends most of the time in their apartment where they practice their music utilizing a laptop drum track on loan to them from their friend, Count Gorehound. Their need for a drummer to achieve any semblance of legitimacy has never been greater. 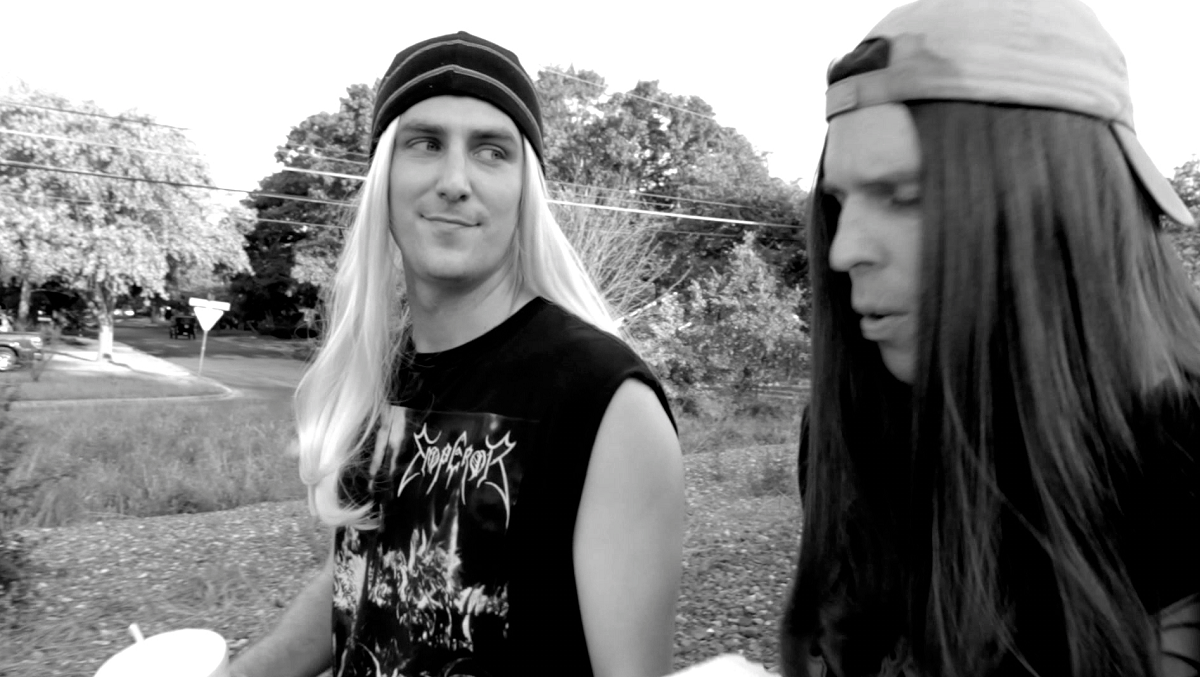 Anyone who has ever delved into the creative process or who has lost friends due to greater opportunities elsewhere will no doubt recognize the situation in which these two find themselves. Necronomica never feels too "inside" in regards to the sub-genre of music Borknarg and Absu play together. These guys could have been opera singers or even fashion designers and the themes of the film would still resonate. The make-up they wear and the stage antics they talk about mainly serve to make the film funnier.

Writer-director Kyle Bogart strikes the right balance between comedy and pathos, never suggesting that the audience should be laughing at these guys. Yes, their faces happen to be painted in heavy goth make-up as they talk openly about their fears and insecurities, but therein lies the film’s charm. It is a funny sight to behold, but Bogart and his actors never lose the sense that the friendship between these two has a deep, everlasting foundation.

Farris and Scheibmeir do a commendable job of acting through their make-up and with perfect comic timing. They have created two characters that could warrant their own feature without making their behavior feel like a shtick. They never wear out their welcome and their choice to play everything straight yields great rewards. While they talk about bloody goat skulls and flaming scarecrows, these guys remain deeply introspective, sometimes unabashedly optimistic and unwilling to give up on each other. It’s the foundation of a truly “evil” band, an even more “evil” friendship and a very funny and unexpectedly touching film.

Necronomica was an Official Selection at South By Southwest and the Chicago Critics Film Festival in 2013.

Do any of Borknarg’s fears reflect your own? Or are you like Absu, the leader who has to figure everything out?

I relate to aspects of both characters, but I am definitely more of an Absu. The small group of guys I’ve worked with since film school feels much like a band. I lead the charge right out of college for us to run off and try and make our own films rather than pursuing more lucrative opportunities. After a few years of struggle, I dealt with a lot of feelings of guilt for having lead my friends astray. I felt like I was trying to ‘keep the band together’ and an increased pressure to “make it” to prove to them it was all worthwhile. I think those feelings were the genesis of that character and the whole conceit of the film.

Why make the film in black-and-white?

Most of the iconography I associate with Black Metal, like the album art and band photos, were always shot in black and white. So I never saw the film any other way.  It ended up being great for the production of the film because we didn’t have a crew or any lights. Color films have to try and correct “mixed light” from windows or fluorescent bulbs, which we did not have to deal with.  We just opened the windows and moved around some china ball lamps in my apartment and shot the movie in a day.

Talk about your work with the actors. What was the process like in fully fleshing out Borknarg and Absu?

Since Mark lives in LA and Judd lives here in Austin, all of the rehearsals for the film were done over Skype. I was a little scared of the idea at first, but it’s amazing how much the performances developed through that process. In the original script, the final line “You’re the most evil best friend a dude could ever ask for” actually belonged to Borknarg. However, in the rehearsal process, I realized that this was not a story about Absu saving Borknarg, but about Borknarg saving Absu. When I told the guys I would be inverting their final two lines of the film they were immediately on board. In retrospect, I can’t imagine the film ending any other way.

Perhaps the most interesting part was the acquisition of the infamous goat head, which we ignorantly thought would be easy to find. It required me to drive to a Halal market in Houston, pack it up in a styrofoam cooler and drive back to Austin with it buckled in my passenger seat. Thankfully, I was not pulled over.

Actually, another short film. Though the content of this film is pulled from a feature film script I had written. We’ll be shooting in the summer and (hopefully) raising money for the feature at some point in the future.

NECRONOMICA from Kyle Bogart on Vimeo.