A stalwart dynamo with a booming voice, Hudson first made headlines when she lost the title of "American Idol" in the show's third season, only to bounce back and gain an Oscar for her performance in 2007's "Dreamgirls," a win many saw as a "told ya so" to "Idol's" judges and voters. The trophy led to more gains, including roles in the first "Sex and the City" film and "The Secret Life of Bees"; however, it was soon followed by the devastating, unfathomable losses of her mother, her brother, and her young nephew, all of whom were killed in a shocking series of incidents in 2008. The world watched as Hudson somehow pushed forward, and in 2009, she gained a spot singing the national anthem at Super Bowl XLIII, her first post-tragedy appearance. And then, of course, there was the much-publicized weight loss, which, by 2010, seemed unmistakably symbolic—a shedding of the past, and that which might have slowed or held her down.

All of this translates into, and corresponds with, "Winnie Mandela," and Hudson's portrayal of the film's title subject. As shown on screen, Winnie, the one-time wife of Nelson Mandela, who became a major political figure in her own right, struggled hard from day one, born into a family that wished she'd been a boy, persecuted for her race after striving to gain an education in Johannesburg, and serially terrorized by police in the apartheid era, most notably spending 18 months in solitary confinement while her husband was also imprisoned. Directed by South African filmmaker Darrell Roodt, the man behind "Sarafina!" and "Cry, The Beloved Country," "Winnie Mandela" has traveled a rough path, too, shunned by its subject due to a lack of consultation, criticized by South African workers' unions for the lack of a native star, and continually delayed after its 2011 premiere at the Toronto International Film Festival, where it was met with lukewarm reviews.

Finally hitting select theaters this Friday, "Winnie Mandela" isn't a perfect film, but it's yet another major career milestone for Hudson, who's riveting in her most mature, complex, and emotionally demanding performance to date. Calling me from her home in Chicago, where she was on "mommy duty" (she has a five-year-old son, David), Hudson discussed the profound things she has in common with Winnie, the ways in which her work relates to growing equality in entertainment, and that signature inner fire that keeps her going.

This film has had a long road to getting an official release, so it must feel good that a wider audience is finally going to get the chance to see it.

Definitely. It's been about three years, I want to say. But I'm just glad, like you said, that it's getting a platform to be seen. We definitely worked really hard on it and put a lot of time into it. 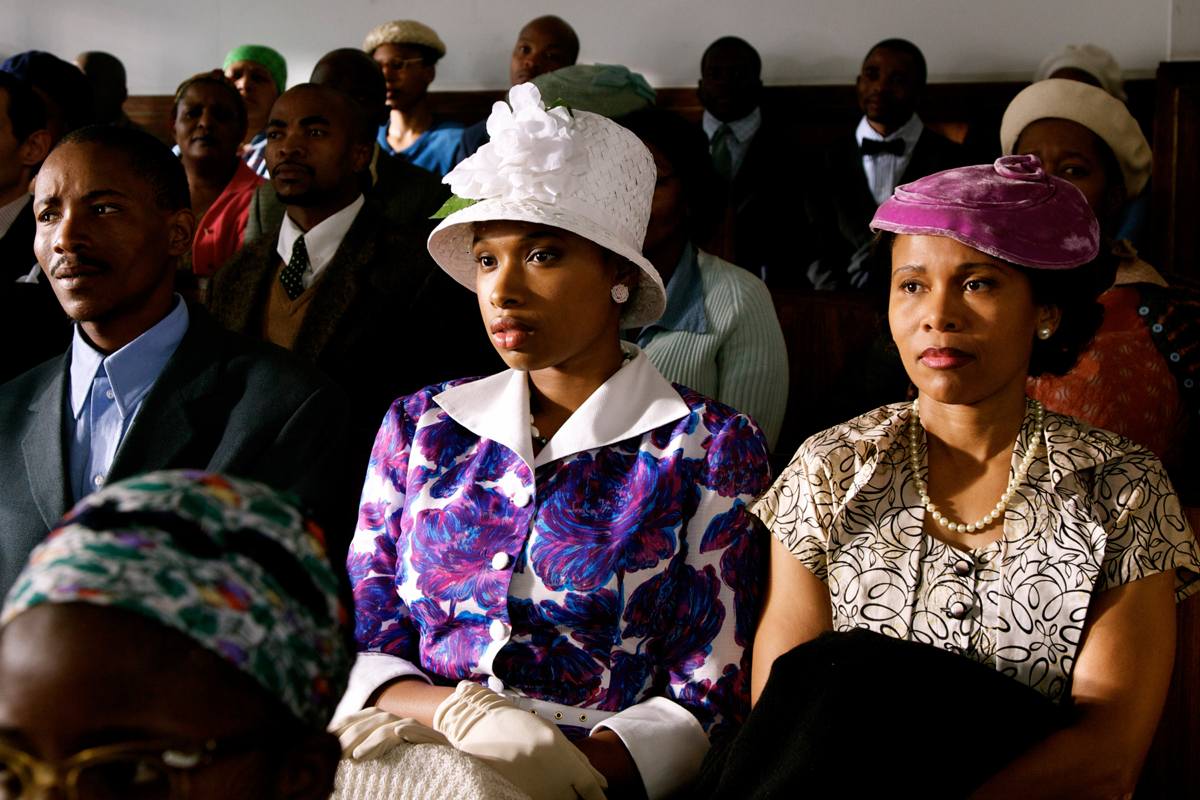 We see a lot of biopics come along about people we already know a lot about, but one of the chief functions of a film like "Winnie Mandela" is its ability to inform viewers about someone who's a little less widely known. Did you know a lot about her before getting involved with the film?
Advertisement

That's the thing that drew me to the role. I mean, everyone knows Winnie Mandela's name, but we didn't really know her story. And reading the script, that's how I was introduced to her story. And I was like, "Wow. Why don't we know about this? How come we haven't heard about this story? How come we haven't been told it?" And that's what made me really want to be a part of putting that story out there. This is a huge part of our history—not just African people, but all of our history. And I wanted to be a part of that.

From what I read, there was some controversy surrounding the fact that Winnie herself was not consulted during the making of the film. How did you feel about that? Did you want to meet with her?

Well, as an actress portraying a real-life figure, sometimes you want to stay away from that. You don't really want to put the two together because you just don't know what kind of effect it may have. And also, I didn't learn much of [the controversy] until we were in the thick of things, creating the film. But it is her story, and I believe she has every right to be a part of it if she chooses to be to be.

Is there something that, if you'd had the chance to meet with her, that you would have wanted to ask?

I still would love to have the opportunity to meet her! Hopefully, one day. Maybe this will be the vehicle for me to be able to do that.

From what you gathered about Winnie, do you personally think she would have entered a life of politics had she never met Nelson Mandela? Because, in the film, her political life doesn't really begin until the two unite, but her persona surely suggests she was already inherently capable of that life.

You know, I feel as though, a lot of times, you never know what you're capable of until your put in those circumstances, or certain situations. But she was a very bright, bright girl, so I just always saw her as being destined for greatness, no matter which way it would have went.

I understand there was some outcry from South African actors regarding the casting of an American, but I kept thinking that, beyond the power of your performance, you were really an apt casting choice for a lot of reasons. Specifically, Winnie is someone who was forced to endure a string of hardships, which is something you can definitely relate to.

I did see that parallel. Thinking about Winnie, the one thing we definitely have in common is that we're both fighters, no matter what we're up against, or going through. She fought her way through, and I'm fighting my way through, still to this day. And I thought, "They definitely got the right person to play Winnie." She's a fighter. I'm a fighter. 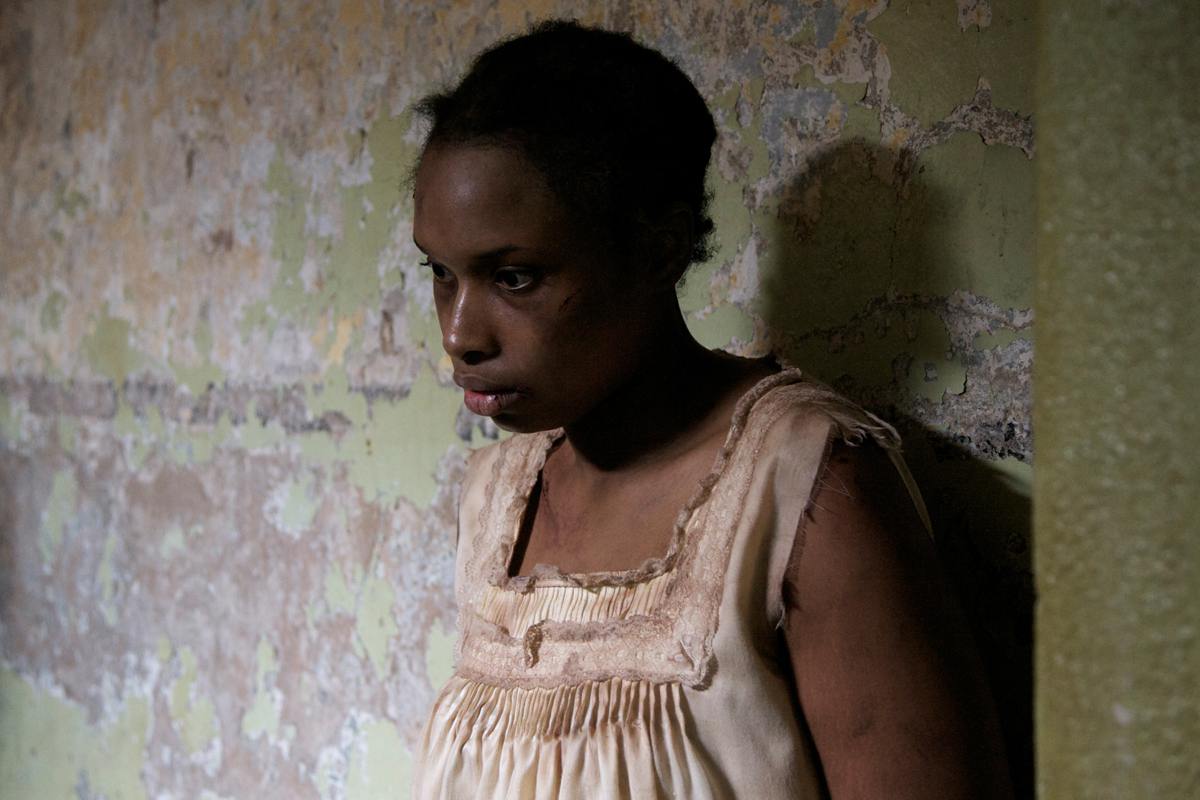 To that end, I found myself wondering what the discussions between you and Darrell Roodt were like, regarding when Winnie would show vulnerability. For example, when her husband is handed a life sentence, she remains stone-faced, but when she herself is arrested, and taken from her kids, she's in shambles. Was there a lot of talk about if and when Winnie would crack?

Interesting. Good question. I would say, at that point [when she's arrested], that was the mother crying out. Who wouldn't? That's how you get to a woman's heart. In stripping her from her children, that's what they're trying to do—break her. And that's another thing: while I was filming those scenes in solitary confinement, I remembered times when I was away from my son. And I was able to use that feeling in those moments, in those scenes, thinking of my child and being like, "Wow." Thinking of Winnie, it was so much worse, because I knew where my son was. I knew he was being taken care of. Winnie is locked up, and she doesn't even know if it's night or day, let alone where her children are. That is the worst nightmare—not to know where your children are. Are they alive? To think, and ponder, and wonder for that long, after being ripped from them—who could not be broken from something like that? And yet, she still fought her way through it.

When she's finally released, she tells Nelson that her oppressors only "made her stronger," and again, it relates back to a theme of your life—becoming stronger emotionally, professionally, and also physically. Toward the end of the film, you're seen wearing prosthetics to make Winnie look older and a little heavier, and I was wondering, having undergone your weight loss, would you opt to gain weight back if the right role called for it?

Well, actually, [portraying] Winnie was part of the weight loss. It just paralleled with everything else, and brought everything together, because that was one of the things required for the role. So, in my work, yes. It's a part of my work. It depends on the role—if I need to gain or if I need to lose. For "Dreamgirls" I had to gain 20 pounds. And for this, I had to lose a certain amount of weight in order to have a physical similarity to Winnie. And if there's another role where I need to gain weight, I would do it.

Winnie has what I'll call a "Pretty Woman" moment in the film, where she's forced by a boutique owner to remove a dress she's trying on because she's black, and not "good enough" to wear it. Even now, decades later, we have something like the Oprah incident in Zurich, with the purse. Hearing about that story, were you taken back to shooting the boutique scene?

I was, yeah. This sort of thing happens everyday, all the time, to people like myself, or whoever. And to act it out, it shows you that this can happen to women anywhere, back then and now. And for us, these days, it's harder to identify it. So when you see things like that, played out in a scene like that, it makes it clear—what it is, and what happens.

It was nice to see you take part in Macklemore's "Same Love" performance at the MTV Video Music Awards. There were all types of equality being promoted on that stage.

Oh, yeah. I love the song. I love anything with meaning, and a message. And that song has such a powerful message and represents a lot of things that I believe in, and stand for. So it was an honor to be a part of that, and to help spread the message that much more.

Wow, yes. I feel as though everything has a season, and I do believe it's a season for us, and for projects like these, and films like this.

You know, I was going to start by saying that this movie really brings out a fire in you, but then again, you already needed a lot of fire to play someone like Effie White in "Dreamgirls."

[Laughs] It's the fire without the singing. How about that?