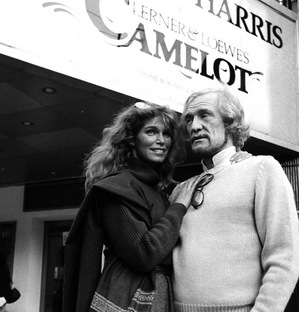 Richard Harris, dressed from head to toe in black, sprawled on the couch in his hotel suite and sang, not at all badly, a few warmup lines of "Oh, What a Beautiful Morning." It was afternoon, although apparently not for him, and he was in Chicago with Ann Turkel, his bride of 13 days, to promote a new movie they costar in.

The name of the movie is "99 44/100% Dead," and that is what most of its villains are, after they encounter Harris. Unlike the soap, however, they do not float, and the movie opens and closes with scenes of a macabre fraternity of the deceased: gangland victims encased in concrete and sent to wait at the bottom of the East River.

"The only way to view this movie," Harris explained, "is to see it as sort of a comic strip, to be enjoyed and laughed at on a strictly one-dimensional level. Once you ask yourself the first question about it, you're lost."

Harris plays the world's greatest hit man, who is imported to New York as a big gun in a war between Little Eddie and Fast Joey, or Little Joey and Fast Eddie ("We never quite explain who either one of them is"), and Ann Turkel plays his girl friend. She is a schoolteacher, who drives the getaway school bus.

"I was petrified," she said, looking, however, definitively the opposite on the couch next to Harris. "I had never driven a stick shift in my life before, and they gave me about two hours' lessons and set me loose in Los Angeles traffic."

"I almost turned us over," she said. "They had a stunt man in the back, but I can't figure out how he was going to help me."

"He was scared shitless," Harris observed.

Their movie, which has been directed as sort of a cross between Steve Canyon and Fearless Fosdick, is a very flatsurfaced, exaggerated, popart fantasy by John Frankenheimer, whose other credits include "The Manchurian Candidate."

"When he sent me the script," Harris recalled, "I got to the line that said, 'This town isn't big enough for both of us,' and I threw it aside. What the hell kind of line is that? It went out with the 1930s. But then I thought if the script's so bad, what's a class director like Frankenheimer doing sending it to me? So I picked it up again, and got the joke. It's a comic strip put-on, done perfectly seriously."

It is the latest of a great many movies, most of them ("This Sporting Life," "Man in the Wilderness," "Camelot") successful for Harris, but it's Ann Turkel's first role. She's a Westchester County girl, daughter of a clothing manufacturer, who did a lot of modeling and television commercials before Frankenheimer saw her screen test, liked it and put her opposite Harris. Casting about for the most original question I could imagine, I asked if it had been love at first sight.

"Not exactly," said Ann, a tall and slender brunet with wide eyes and, sigh, lots of other qualities. "Actually, first sight was five years ago. We met then, but Richard doesn't even remember."

"When he found out that I'd been cast for the movie, he wanted me fired," she said.

"There are too bloody many good actresses unemployed already, so why give this unknown a job, was my line," Harris said.

"There was an item in one of the London papers, all about Ann Turkel vs. the Ogre," Ann said.

"I looked up ogre in the dictionary and I didn't like it one bit," Harris said.

"We were both in London at the time and scheduled to fly to Los Angeles on the same flight," she said. "I was so frightened of Richard I changed my ticket to tourist class to escape him."

"That was unnecessary," Harris said, because I bloody well didn't fly back at all. Then Frankenheimer called me up and told me to stop being a bloody fool and trust his judgment, because he'd seen the screen test.

"By the time I finally walked on the set, I was feeling rather guilty, and so I sort of helped her, you know, and we became friends. But she still had her boy friend back in London. One day, after about six months, we were sitting by the pool, and I said, 'Ann, dearest, do you think there's something going on between us and we don't know about it?'"

"Maybe it's a case of opposites attracting," Ann said.

"That's it," said Harris. "She used to go out with tall, sleek, wellgroomed men, and I went out with buxom blonds. There are thousands of girls on the streets like the ones in Hollywood today, but not many girls of the more elegant type, refined . . . I think Annie has a real gift."

Their next movie together might be a sequel to his very successful "Man in the Wilderness," he said. That one grossed around $15 million and was about a civilized English man surviving in the wild.

"I almost got killed on that one," he recalled. "I was suspended from the top of the tepee for the manhood ceremony, and the rope broke and I fell. I could have landed in the fire or impaled myself on a buffalo horn, but I missed and landed between them. Remembering my early training in tavern brawls, I sprung quickly to my feet, because when you're on the floor, they kick you. Only THEN did I pass out."

Harris, it's been noted, is very likely the only living actor who has starred not only in a Doris Day picture ("Caprice") but also in a Michelangelo Antonioni picture ("Red Desert"). I asked if he brings the same acting techniques to both kinds of movies.

"The only advice I ever got on acting that did me any good," he said, "was a long time ago when I was just starting out and I made a picture in Ireland with James Cagney. It was called 'Shake Hands with the Devil.' I'll never forget, one day, Cagney summoned me to his suite at the Shelbourne Hotel for a couple of drinks.

"And then be said, 'Kid, you'll do OK. You'll make it.' Harris was doing his Cagney imitation. 'But remember this: When you're in a movie and they want you to go from one place to another, walk in a straight line. A straight line. That's how they'll know you're the star. Too many of these goddamned English actors are walking in curves all the time!" 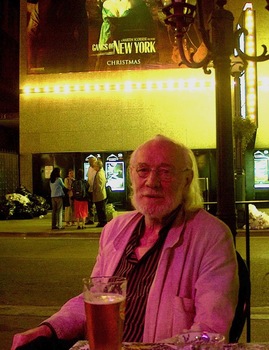 Richard Harris at the Toronto Film Festival, 2001. (Photo by Ebert. Mentioned in obituary below.)