Pogo says it for the very first time

Walt Kelly remains in my mind the greatest of all creators of daily comic strips. Yes, greater than Charles Schultz, because Pogo's Okefenokee Swamp was considerably larger than the Peanuts landscape, his characters were sometimes wicked animal versions of politicians, and his drawing was so delightful.

Pogo has become immortal for a single line:

And here's an example of one of the many theoretical and philosophical conversations that went on in Pogo's neighborhood. [ Click to enlarge ] 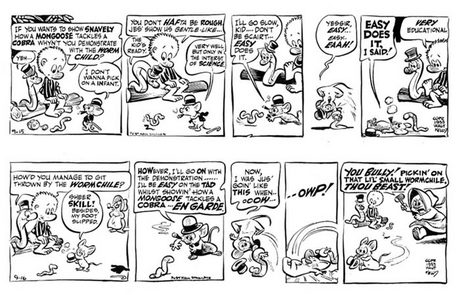