"Plan 9 from Outer Space," by the Worst Director of All Time

The Ebert Club would like to share the following Public domain film while inviting non-members to join the Club and see what the future holds..."It takes a special weird genius to be voted the Worst Director of All Time, a title that Wood has earned by acclamation. He was so in love with every frame of every scene of every film he shot that he was blind to hilarious blunders, stumbling ineptitude, and acting so bad that it achieved a kind of grandeur." - Roger, from his review of Ed Wood (1994) 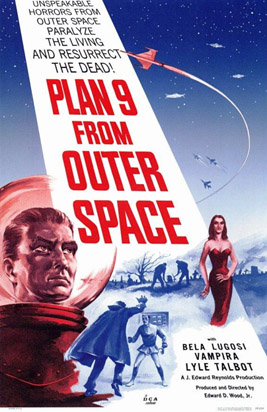 "Greetings, my friend. We are all interested in the future, for that is where you and I are going to spend the rest of our lives. And remember my friend, future events such as these will affect you in the future. You are interested in the unknown... the mysterious. The unexplainable. That is why you are here. And now, for the first time, we are bringing to you, the full story of what happened on that fateful day. We are bringing you all the evidence, based only on the secret testimony, of the miserable souls, who survived this terrifying ordeal. The incidents, the places. My friend, we cannot keep this a secret any longer. Let us punish the guilty. Let us reward the innocent. My friend, can your heart stand the shocking facts of grave robbers from outer space?" - Plan 9 From Outer Space

Yet even more excitement awaits you inside the Newsletter. Join the Club and find out!
Advertisement