Man-made Woman: What we can learn from Ja'mie Private School Girl

Many of the guys I know who concede to the merits of "Ja'mie: Private School Girl" do so falteringly, as though they stand to lose something by that admission. Critic Phil Dyess-Nugent of The AV Club tells us he can't take Ja'mie, the heroine of "Ja'mie: Private School Girl," imported from Australia and now playing in the United States on HBO, for more than six minutes. Such distaste is to be expected. This is a program that, to a degree, humiliates men; they are manipulated, waxed of their body hair, and expressed in "dick pics"—of which Ja'mie has compiled an album. Thus far, however, the show's critics, most of whom happen to be men, do little to engage with the significance of its star and creator Chris Lilley becoming Ja'mie, a girl who reflects chauvinist criticism and is also its poster child.

Drag was once a common sight in vaudeville and in TV comedy derived from it. It has become a rarity on TV and in film, and when we do see it, it's often coupled with a social critique or an inspirational message. In the popular incarnations of "Tootsie" and "Mrs. Doubtfire," for instance, the male protagonists become older women out of some necessity, and learn the double standards faced by women while retaining their perspective. Ja'mie, however, is not that kind of character. She's a teenaged girl who is incidentally played by a member of the opposite sex, and the TV character she most resembles is probably Eric Cartman of "South Park."

This series and Trey Parker and Matt Stone's animated satire have at least one other quality in common: their brand of comedy invites viewers to think the show is celebrating behavior that it's actually mocking or exposing. If a series is about racism or sexism, it is not inherently racist or sexist. If a man puts on a dress and gives a curious impression of a teenaged girl, we can be torn as to where to focus our attention. I can forget, for the most part, that the character is a man in a school dress; I can also appreciate the accuracy with which he captures a feminine side of the teen experience. To say I know this girl is not to say that I'm her friend, but that recognition certainly makes me laugh. This shock of recognition carries over to the things Ja'mie says. She's funny because she is ridiculous, not because she is racist. Lilley, who does dominate the screen time—this is the Ja'mie show—reminds us that outside of her insular clique, she is simply a loudmouth and a bore.

Ja'mie is a character caught in the push-pull of rebellion versus a desire to be worshipped. Her life is a performance, a big show that betrays an underlying difficulty with intimacy. Yes, she is racist and, yes, her views of women are misogynistic, though she admits, for example, that she doesn't understand why she hates the girls who board on the school grounds. She can only call them fat or lesbians, when it is obvious that Erin, a boarder, poses a threat to Ja'mie's chances of winning the Hillford medal. Add in her contempt of Asians—the students she feels are academically superior to her—and it's clear Ja'mie suffers from a need to be the best at everything, a competitive conflict which she masks with bigotry and bullying, and which echo a masculine reductionism in the face of challenge.

The trouble with Ja'mie is that she, a teenaged girl, should identify so thoroughly with male chauvinism, and despite her socio-economic advantage and attending the best girls school in Sydney, be so poorly educated. She is one of the most complex women on Australian television, featured in a series constructed and contained within an active—and often aggressive—feminine gaze. Where Chris Lilley is an exceptional impersonator of women, Ja'mie, unfortunately, can impersonate men just as well. 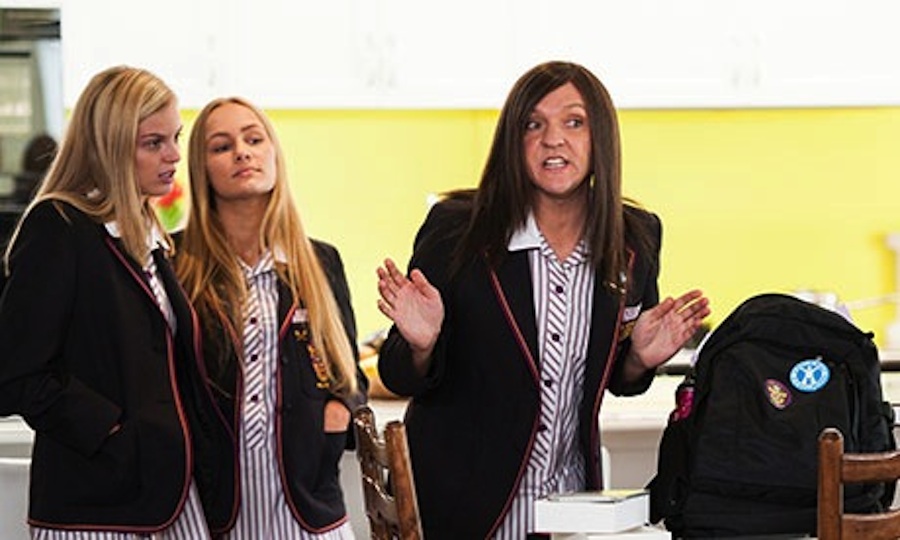 Her lasciviousness, her laughable provocations, her inert childishness betray a profound discomfort with sex. When she gets in a scrape with the vice principal of her school, she flirts with him; she nibbles her father's shoulder by way of persuasion; she exposes herself to boys, but can't quite manage a kiss; she boasts an album of "dick pics" but is repelled by Mitchell's erection and dishonest about her experiences with him; she hates lesbians, but is perhaps somewhat ambivalent about her own sexuality. She calls it a 'bi-sexual phase', but we can't be sure what it really is.

In the final episode, in a scene that showcases the pathos that we have come to expect from Lilley, Ja'mie voices her true regard for her father. It's a demoralizing insight, meant to console her defeated mother. Jhyll has something to learn from her daughter, who adds 'nobody f---s with me and gets away with it.' When Ja’mie challenges her school’s dismissal of her, based on the emergence of a scandalous YouTube video of her and a Ugandan boy, Kwami, the challenge is self-serving: revenge for a wounded ego. However, for the first time in the show, Ja'mie's outrage is not misdirected. Hillford Girls Grammar School officials do not debate with Ja'mie over any of her bigoted slurs, and not even in defense of Erin, another Hillford girl who bears the brunt of them. The school's criticism is of inappropriate language and sexually suggestive behavior, and their interests are not in educating girls on race and gender or punishing them for bullying, but in upholding the institution's reputation as Sydney's best girls' school.

Ja'mie's revenge, a defiant act that will get her expelled, is a brilliant example of her potential, her ability to organize, her writing of her own history, her 'learning to be me', a few steps toward freedom. Through Lilley, we get an impression of how men create women, but he can also create a woman’s viewpoint. Women dominate "Ja'mie: Private School Girl." Women’s interests and concerns are the center of its conflict. The construction of female gaze is radical, revolutionary. Through naïve, troublesome Ja'mie, we learn that young women are not simply what our culture has made of them.