By Roger Ebert / October 27th, 1977 Some 1,800 movie theaters were going to start showing commercials before their feature attractions this week. But, alas, the two biggest Chicago chains aren't included. "We have no plans for commercials," says Jerry Bolger of the Plitt theater chain. And Oscar Brotman of Brotman and Sherman theaters declares: "What? Commercials in my the theaters? Never! When people spend $3.50 to see a movie, they deserve a break!" Oh they do, do they? Brotman and Bolger shouldn't be so quick to dismiss a part of our common folklore. Commercials are nothing new in American movie theaters - they were a staple of small-town and neighborhood theaters until the 1950s - and they provided valuable memories for young filmgoers on the way up. How can I ever forget, for example, my first exposure to what now is known as cinema verite - -the cinema of truth? It was on a Saturday afternoon back in 1950, in the Princess Theater on Main Street in Urbana, Illinois. We were jammed In there, 600 kids, row on row, fighting and shoving and trying to blind each other with our Holloway bars, waiting to see Hopalong Cassidy and the Bowery Boys. We had paid 9 cents to get in. And Mr. Alger, who owned the Princess, was never, then or later, ever quoted as saying, "When people spend 9 cents to see a movie, they deserve a break!" The lights went down for the five color cartoons, which were greeted with nonstop applause and laughter. For 9 cents, we were easy to please. Then the lights came up again so that the assistant manager could come onstage and announce that Dan-Dan the Yo- Yo Man would be holding the finals of the official Duncan yo-yo contest next Saturday. A Schwinn bicycle was wheeled onstage - first prize. Then the lights went down again, and it was time for the commercials. Well, first an announcement from the management: "This theater will give a reward for information leading to the apprehension of anyone responsible for vandalism!" This announcement usually was accompanied by the sound of theater seats being ripped open. And then it was time for the commercials. How well I remember them! They were a lesson in civics, commerce and the Urbana power structure. They advised us to fill our prescription needs at Knowlton and Bennett's drugstore. To read the Courier. To patronize Glenn Poor's Radio (in 1950 television was a rumor from the big cities). One advertising card was worded, somewhat puzzlingly, "The Busey First National Bank thanks you for your support." Those were just the slides. Then came the moving commercials, and with them came my initiation to cinema verite. The one I'll never forget was for the Urbana Pure Milk Co. In those days, and for many years thereafter (before it was absorbed by a gigantic conglomerate industrialized cow), the Urbana Pure Milk Co. had horse-drawn milk wagons on most of its routes. The horses knew the way. They would stop of their own accord at the homes of Urbana Pure Milk Co. home-delivery customers. And in the commercials at the Princess, the horses were indeed shown doing just that. One horse in particular enjoyed his ritual stops so thoroughly and so well that as the milkman whistled his merry way across the lawn on a bucolic Downstate morning, the horse relieved himself right there in the background. Not an easy detail to spot, but we were observant, and this moment was greeted, week after week, with tumultuous applause. In these sterile and sanitized 1970s, I suppose, a sponsor would not approve commercials in which one of its animals behaved in such a natural way. Poor Morris the Cat, for example, has apparently lost all of his faculties except the one for telepathic speech. But in 1950, the commercials were taken as they came. They provided a valuable interlude for popcorn fights and tentative hand holding before the excitement of Hoppy's latest adventure. And many years would pass before I'd look back nostalgically to a golden age of movie-going in which a whole afternoon at the movies included only five seconds of horse manure. 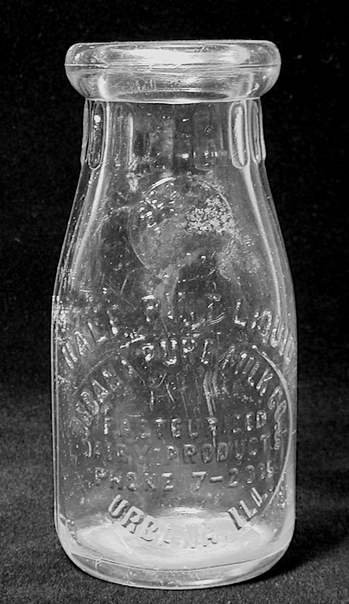 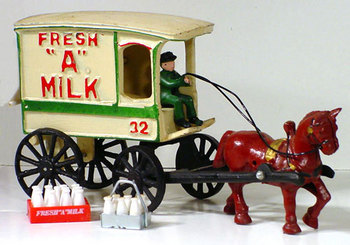