Madeline Kahn: "Why Are You Laughing?"

The best comic performers are the ones who never seem to work too hard to get a laugh, the ones who are deadly serious but ever-so-slightly cockeyed or bent, and Madeline Kahn was a delightful example of this throughout her sadly circumscribed and shortened life and career. In William V. Madison’s painstakingly researched, very touching new biography of Kahn, she is always asking her colleagues and her friends, “Why are you laughing?” because she herself didn’t quite understand why she was funny.

Daniel Sullivan, who directed Kahn in the play for which she won a 1992 best actress Tony, Wendy Wasserstein’s “The Sisters Rosensweig,” called her comic effects “clueless on purpose.” The extremely reserved and even somewhat prudish Kahn worked by instinct, and her helplessly comic instinct brought her to a point where all she had to do was walk on stage and the audience would start laughing before she even opened her mouth. She was a boon for any movie, TV special or stage play because she could get laughs with any kind of material. Kahn was someone who “said things funny, not someone who said funny things,” said her friend Lily Tomlin. 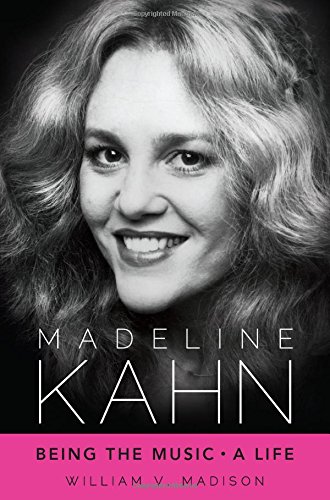 She was born Madeline Wolfson in 1942, and her father left her mother Paula when she was three years old. She took her last name from her stepfather, Hiller Kahn, before he also fled from the devious and grandiose Paula, who was very skilled at manipulating her daughter and making her feel insecure. “I always had the feeling that she was a little affected in the way she spoke,” said Hiller of the young Madeline, “as though there were someone who told her that she should be careful about choosing her words and the way she formed sentences.” A frustrated performer, Paula sent her daughter away to school early, which exacerbated the abandonment issues that would plague Kahn for most of her life. Kahn said that she became an actress because she wanted to make her fantasies real, but privately, without an audience watching, and this explains the curious self-enclosure of her performances, the sense of outraged privacy that was her funniest mode.

Kahn did a Ruth Draper monologue to get into Hofstra College on a scholarship, and she worked as a singing waitress in a German restaurant, trilling operetta material with her flexible soprano voice. Soon she was doing two shows a night, six days a week at Upstairs at the Downstairs, a club in Manhattan where she first built her reputation as the young grande dame of sketches and spoofs. “If she wanted material to be comedic in her hands, it would be,” said Tomlin, who was recommended to work in the club by Kahn. “She has that kind of musicality to her voice—her inflections…It was the way she might ruminate over something while she was talking.”

Perhaps to keep an already messy love life at bay, Kahn moved back in with her mother Paula in 1967 and stayed with her for a while. She sang an intense and risky Cunegonde in a few performances of Leonard Bernstein’s “Candide,” and her “Glitter and Be Gay” can be heard live on YouTube, though you won’t be able to see why everyone is laughing so hard at her. “She juggled her breasts!” said the conductor, Maurice Peress. “She was outrageous…for the ‘topper’ she put the last of her jewels, a big ruby, in her bellybutton.” And she did this outré shtick all while singing one of the most demanding songs ever written for a soprano.

Kahn did a controversial musical called “Promenade” with a book by Maria Irene Fornes, and people began to notice how special and specialized she was as a performer. She sang Musetta in a production of “La Boheme” but chose not to pursue opera seriously, and Madison, a former editor of “Opera News,” writes insightfully and engagingly about her singing voice and what might have been. Kahn endured the Danny Kaye vehicle “Two by Two” on Broadway, where the star belittled her and sexually harassed her, and she was not happy that her first role in a feature film was the dowdy and adenoidal Eunice Burns in Peter Bogdanovich’s “What’s Up, Doc?” (1972). Both that film and Bogdanovich’s “Paper Moon” (1973), where her sexy and quietly desperate Trixie Delight won her an Oscar nomination for Best Supporting Actress, showed the skill with which she could get laughs, and they also showed her range. In each of those Bogdanovich movies, Kahn steals them by minimizing her effects, by reducing, by not “trying” in the expected performing sense. Her style was to withdraw, to suggest, and even to attempt to disappear before the laughter got too loud.

She got another Oscar nomination for her Lili Von Shtupp, a hilarious parody of Marlene Dietrich, in Mel Brooks’s “Blazing Saddles” (1974), gaining a measure of comic immortality with her rendition of the song “I’m Tired,” an endlessly re-watchable routine, laidback and yet filled to the brim with unexpected little details. It was Kahn’s idea to grandly rest her hand on nothing but the air as she does around three minutes into “I’m Tired,” and it was also her idea to break into the ecstatic Victor Herbert chestnut “Ah! Sweet Mystery of Life” when the monster makes love to her in Brooks’s “Young Frankenstein” (1974).

Brooks tells Madison that he thinks that Kahn and Gene Wilder must have had an affair during the making of “The Adventure of Sherlock Holmes’ Smarter Brother” (1975), but Wilder himself insists that they didn’t (they do have an intense kind of sexual chemistry in that thin comedy). Madison quotes from a notebook Kahn kept during the making of this movie to show how seriously she always took her work. Here’s a revealing, stream-of-consciousness fragment from the notebook describing the way Kahn wants her character Jenny to sing a certain song:

“A little girl—precocious—“singing a song”—testing and then reveling in her voice; + getting off on the sexy parts—her chance to pretend she’s a “woman”; One would sneak out at night to sing this (even as the character who is playing that she’s an adult) and, Jenny who can be 5 again when everyone loved her.”

Kahn was very much a creature of the 1970s: cerebral, pre-occupied, neurotic, sexually liberated but also guarded and scared. So many of her co-workers in Madison’s book speak about how frightened she often was; she was very easily hurt and subject to panic attacks. Kahn did adventurous theater during that decade, playing in David Rabe’s “In the Boom Boom Room” and John Guare’s “Marco Polo Sings a Solo,” but she came to considerable grief when she did “On the Twentieth Century” on Broadway in 1978, leaving that big musical not long after it opened amid a storm of rumors and counter-rumors. Madison clarifies these rumors for his readers, carefully shooting down the story that a drug habit was responsible for Kahn leaving the show and instead letting us see that she was unhappy in her personal life and also worried that singing the very difficult score eight shows a week might ruin her voice. (Her co-star Kevin Kline is particularly persuasive in defending Kahn against this drug rumor.) A bad relationship with her director, Hal Prince, only made matters worse.

After that debacle, nothing seemed to go right for Kahn for a long time. Her movies in the 1980s grew steadily worse, even if in mid-decade she would snatch one more bit of comic immortality with her celebrated “Flames…flames…on the side of my face…” bit in “Clue” (1985), which Madison reveals was an improvisation (kudos to Martin Mull for keeping a straight face behind her):

Kahn did a short-lived sitcom in 1983-84 called “Oh Madeline” and returned to the stage in Garson Kanin’s “Born Yesterday” before winning the Tony for “Sisters Rosensweig.” In 1989, Kahn finally met a man she could trust, John Hansbury, and she built a happy relationship with him, but challenging roles on film and on stage were few and far between for her in the 1990s, unfortunately. And it didn’t help her spirits when her mother Paula, who had often done embarrassing one-woman shows during Kahn’s 1970s heyday, would randomly sue her and try to get even more upkeep money.

Before her time ran out, Kahn played in Eric Mendelsohn’s “Judy Berlin” (1999), a small independent movie shot in black and white where she showed for the first time on screen the more piercing dramatic colors she was capable of. Mendelsohn understood her deeply, and it shows in the way he films her. “It was as if she had her nervous system mistakenly put on the outside of her body,” he said, and at one point he told her, “I can see just how hard it is to be you.”

In her best scene in “Judy Berlin,” Kahn wanders down a deserted nighttime street in Long Island as her character talks to herself about her crumbling marriage. Kahn knew what an opportunity this was for her as an actress, and she attacked Mendelsohn when he told her a take she had done was great. “It was terrible,” she told him, “and I did it on purpose, and you said it was great.” So often undervalued in her professional and personal life, Kahn was sensitive to all kinds of inattention and threats of abandonment, but she dug deep into herself and finally gave this scene in “Judy Berlin” everything she had, even though she found the isolation of the character “overwhelming.”

Kahn died of ovarian cancer in 1999, and this was an occasion for much public grief. “It was an honor to be with her,” Hansbury tells Madison. “She was a great lady. She couldn’t tell a joke, though. But she was very sweet.” Madison’s book carefully illuminates just how hard it was to be Madeline Kahn, personally and professionally, and he ensures that those who love her can only love her more after reading it.