At first your mind didn't understand, and you thought maybe this was Cher herself, waiting by the elevator for you, and so you stepped off the elevator, smiling stupidly because you were caught off guard, and suddenly the little girl was behind you, and there you were smiling at her in the mirror, and she was scowling because she thought maybe you were trying to pick her up or something.

It was one of those totally unsettling, absolutely miserable situations. If you were James Cagney you would turn on her and snarl, "Dammit, you're only 12," and mash a grapefruit in her face.

But instead you knocked on the door of Room 640, and Sonny himself opened it, dressed in white bell-bottom trousers and a silk brocade shirt the color of rainbows. Then you heard this wail being sent up from behind you: "Sonnnneeeeeyyy!"

The scream propelled you into the room as Sonny hastily slammed the door. In the room there were two girls with long black hair and white bell-bottom trousers. They looked up at you and you wanted to explain that you weren't the one who had been screaming just now, but it didn't seem that they had heard anything.

"Hi, I'm Sonny," said Sonny. Studying the two girls in the room he singled out one and said, "This is Cher."

The girl who wasn't Cher said she would call Room Service.

"How about a drink?" said Sonny.

"It must be hazardous to be the idols of teeny-boppers everywhere," you said. "Do you ever wish you could just, uh, walk down the street?"

"Oh, everybody knows us in Los Angeles," Sonny said. "They're used to seeing us. We don't believe in being aloof and above everybody and all that. We try to be natural."

Cher smiled. "The clothes may not look too natural, but out on the coast they don't stand out too much. Here, I guess they look a little eight and a halfish."

"Eight and a halfish," we said.

"She means Juliet of the Spiritish," Sonny said.

"The only time you really have to worry about your fans is in a concert situation," Sonny said. "Mass hysteria gets started, and adoration turns to hostility. The best thing to do in a situation like that is, don't panic, but assert authority."

"There was only one case where we got physically torn apart," Cher said.

A waiter from Room Service came into the room and passed out menus. Sonny ordered a hamburger and a tossed salad.

"I'll have the Roquefort," Sonny said. "A wise decision," the waiter said. "Soup or appetizer?"

"No thanks," Sonny said.

"One English muffin," the waiter said "Soup or appetizer?"

"Whoddya think this is?" said Cher.

After luncheon was served, Sonny talked about the events of three and a half years, which have catapulted the couple to stardom.

"I had tried to be a singer on my own, but without success," he said. "When I met Cher, I was a promotion man for a record company. I was fascinated. I thought she was beautiful. I knew at once she'd be great."

"I was going to school at the time," Cher said. "I was attending Montclair, an acting school. I didn't really want to be an actress, but I had no interest in regular school and my parents thought this would occupy my time."

Sonny said he hesitated before asking her to marry him.

"I knew she'd be a star. I didn't want to be the husband in the background while she was famous," he said. "I wrote her a poem, saying goodbye. But then we got married. I knew I had to be as powerful as she was if our marriage was to work. Without Cher, I was nothing as a singer. Together we were everything."

"We have to change from singers to entertainers," he said. "We have to develop an appeal for adults as well as the kids. People don't buy a sound, they buy a personality. Look at Sinatra, Bogart, John Wayne."

He said their current image, based on long hair and mod clothes, is simply an outward appearance.

"I don't see why anybody can object to contemporary clothes if they're neat and clean," he said.

"You can dress this way, yet be ambitious, clean, and have good moral values," Sonny said.

"That's what we were trying to say in our movie," Cher said. "If there's a message in 'Good Times,' it's don't sell out."

"We don't make that unhealthy scene on the coast," Sonny said. "A lot of kids are being mislead by Timothy Leary and Allen Ginsberg and Ken Kesey. The whole LSD crowd is nothing but a lot of bald-headed teeny-boppers. They're really weirdos."

"That sort of thing wouldn't happen if parents knew where their children were at all times," Cher said.

"That's right," said Sonny. "It's up to the parents. The family has to unite again. There are altogether too many divorces." He said his marriage with Cher symbolizes the possibility that people can be married.

"Not like a lot of these groups," Cher said, "where there's no telling what goes on."

From the hallway carne a plaintive cry: "Soonnneeee!"

"I would go bald," Sonny was saying. "I would cut off all my hair to play a role." 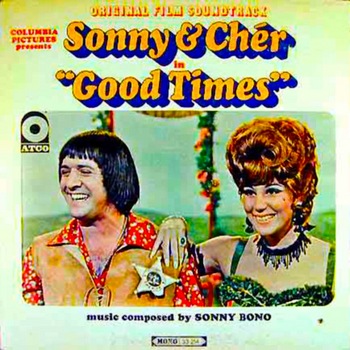 The Story of Who We Are: Gregory Nava Helps Celebrate Selena’s 50th Birthday