Tommy guns, femme fatales, jazz—Frank Darabont's "Mob City" has all the ingredients to appeal to fans of the noir genre and those longing for another look at the gangster era of iconic figures like Mickey Cohen, Bugsy Siegel, Sid Rothman, and more. Written and directed by Frank Darabont, TNT's mini-series is a remarkably accomplished and thoroughly enjoyable piece of work. The director of "The Shawshank Redemption" and the man responsible for bringing "The Walking Dead" to TV brings his palpable love for the genre to this tale of cops, criminals, and the corruption that intertwines them. Perfectly cast and narratively engaging, "Mob City" is surprisingly successful, especially when one considers the beloved works of fiction it recalls throughout to which it could pale in comparison.

"Mob City" is intentionally, spectacularly pulpy right from the start—overheated narration, low angles with neon signs above, a constant jazz soundtrack. It feels as if Darabont isn't making a piece set in the prime of the gangster era but one set within the cinematic consciousness of that time. The writer/director calls out visual touchstones of his genre—a baby carriage shootout that evokes "The Untouchables," a "Top of the world, Ma" quote from "White Heat," a shot that is clearly an homage to one in "L.A. Confidential"—rather than being focused on a particular historical moment. And yet the callbacks don't feel self-conscious, just intelligently designed by someone who adores the genre. It gives the entire piece an air of confidence like hearing a jazz musician who knows the history of his form in enough depth that he could teach a class on it. You’re in the hands of an expert. 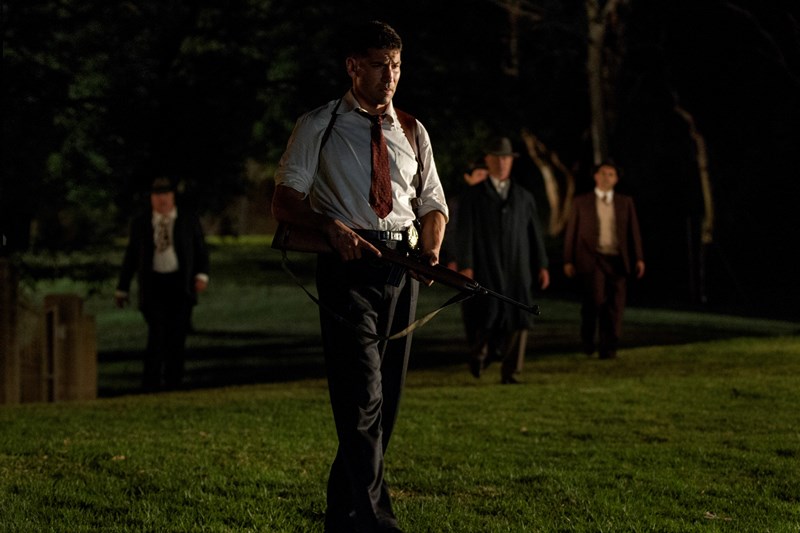 Darabont's story in the two-part premiere, airing on December 4, 2013, has enough twists and turns that it would be too easy to spoil the way it unfolds, and so I will keep the plot description to a minimum. Our narrator and central character is Officer Joe Teague (Jon Bernthal of "The Walking Dead"), a square-jawed, perpetually stubbled, brow-furrowed veteran who has come back from the war with a definite dark side. These days (circa 1947) he plays both sides of the streets, making arrests but also picking up the occasional oddjob for local gangsters. Bernthal is a perfect protagonist with his gruff delivery, bumpy nose, square haircut, and world-weary demeanor. He looks like he stepped out of a Cagney flick.

Teague is contacted by a stand-up comedian named Hecky Nash (a perfect Simon Pegg). The showman has something that some powerful crime bosses want back. He's going to blackmail someone and wants Teague to tag along as muscle. Teague takes it to his superiors, who plan to monitor the meet-up and bring everyone in, presuming that Nash must have something that could put a crime boss away. Things get very complicated from there, and the second hour introduces us to Mickey Cohen, Bugsy Siegel, and the rest of the criminal empire that will push and pull at Officer Teague. 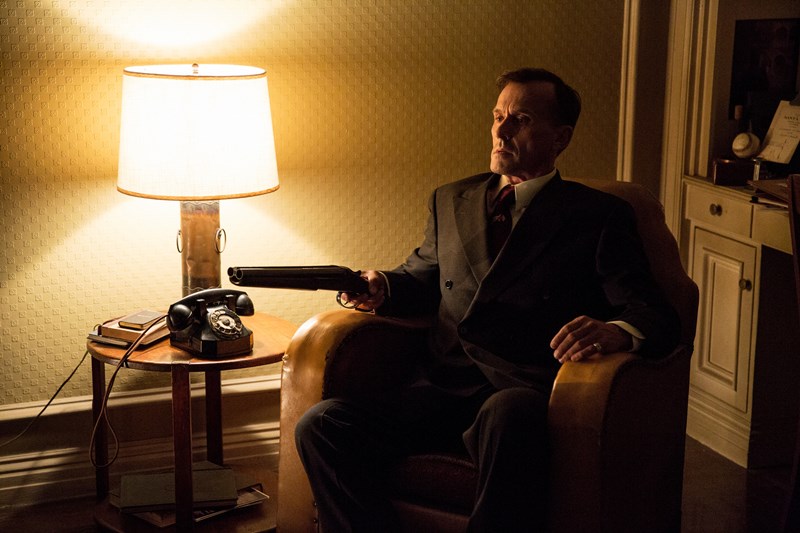 A quick descriptor for "Mob City" might be: "'Boardwalk Empire' with less philosophy and more intentionally cheesy dialogue." Darabont doesn't try to discard the tropes of his genre; he embraces them at every turn. There's not a scene that doesn't feature something that viewers instantly associate with these kinds of stories, from the dialogue to the costumes to the montages that often go something like "neon reflection in a puddle to tommy gun to trumpet solo." I will admit that I wish the production values were a bit stronger, although that could just be due to the years of being spoiled by the intense attention to detail on HBO's program.

Darabont's way with storytelling and genre awareness are the best elements of "Mob City" but it helps the production greatly that it's one of the most well-cast new programs in quite some time. Bernthal plays inner turmoil without chewing the scenery. Pegg has a glorious balance of desperation and a righteous indignation over the fact that his gangster friends always get the lucky breaks. Neal McDonough shines as the blue-eyed, morally righteous cop nicknamed "Bill the Boy Scout," the enforcer who seems least likely to be corrupt. The jury is still out on Ed Burns; his lackluster style seems at odds with what we know about Bugsy Siegel but he doesn't have enough screen time in the first night to yet be a problem. Alexa Davalos looks born to play a femme fatale from this era. Perhaps the most remarkable of them all though is "Prison Break" veteran Robert Knepper as Sid Rothman, a man who we're told has turned being a sociopath into a profession. Knepper is mesmerizing, finding the perfect balance of malevolence and charisma.

Frank Darabont's success with "The Walking Dead" seems to have opened doors for other cable networks to experiment with short-run mini-seasons of writer-driven content in the hopes of finding the next similar hit. "Mob City" doesn't have the cross-demo kick of AMC's massive success but I do hope it finds an audience that can keep Darabont coming back to tell stories in this world and inspire more filmmakers to develop their own for television.