One of the year’s most poignant independent features, Ira Sachs’ “Little Men,” will be screened on Thursday, July 14th, on a Chicago rooftop. The event will be co-presented by Whole Foods, Magnolia Pictures and Elevated Films, the nonprofit started last year by Eddie and Susie Linker. Eddie served as an executive producer on Joe Swanberg’s “Happy Christmas” and “Digging for Fire,” as well as co-founded Forager Films, a production company with upcoming titles featuring actors such as Michael Cera and Chloë Sevigny. Susie was a Wall Street investment banker for decades before she turned her attention to the nonprofit realm. The couple sites New York City’s popular Rooftop Films series as their chief inspiration.

“Many of our films screened at the Rooftop Film Festival in NYC, and we would take the family out to see, and support, our films,” said Susie. “After plenty of trips, we kept talking about how well this would do in Chicago, where we would help raise awareness for indie film, and provide a new outdoor community event that Chicagoans are always looking for.”

“While our events are designed to be social fun events, it is really important to show quality independent films,” said Susie. “Ira makes really interesting movies and this is one that speaks to a broad audience.” 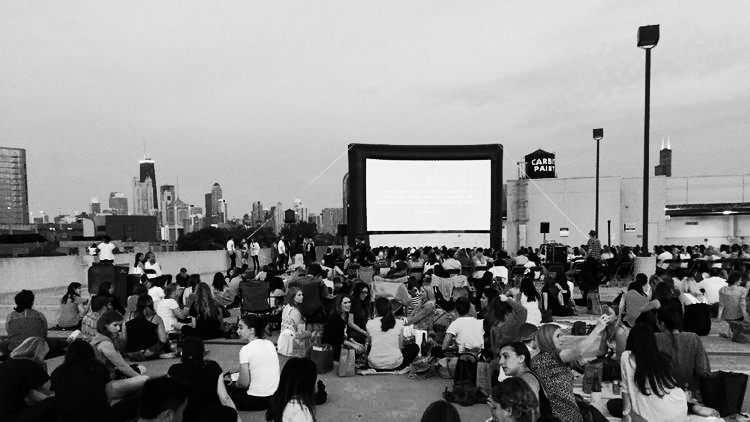 Among the Elevated team are local filmmakers such as Frank V. Ross, Spencer Parsons, Peter Gilbert and Joe & Kris Swanberg, who are all part of the vetting process for each film. Their list of possible titles is culled from selections at Sundance, SXSW and Tribeca. The team also builds discussions around the film via social media in the days leading up to a given screening. Theater-like seating is provided at the outdoor venues, and the screenings are often followed by Q&As with the filmmakers. A nominal admittance fee is crucial in helping Elevated Films reach its ultimate goal.

“We are a registered 501c3 NFP, and our goal is to give back to the film and arts community in Chicago,” said Susie. “All of our net profits are donated, supporting programs in our neediest Chicago communities. Last year, we invited students from Apprentice LAB to photograph our event for us, and were able to give them a small stipend to support their program. We also invited student filmmakers from Free Spirit Media to show a student-made documentary. The students presented beautifully, and the film was so well-received by our audience that the Q&A lasted longer than expected.”

This year, Elevated Films has invited John Mossman and his Southside Film Youth Initiative to “Little Men,” and will screen a short film written and directed by one of his students that evening. Tickets for the full event are $15 per person and include free popcorn from SkinnyPop. The rooftop of Whole Foods, 1550 N. Kingsbury, will be utilized for the screening, and doors open at 7pm. DJ Vinyl Voyage will provide music until the film begins at sunset. Up next in the Elevated Films series is Chad Hartigan’s Sundance hit, “Morris from America,” screening Thursday, August 11th.

For tickets to the “Little Men” screening, click here. For more information on Elevated Films, visit its official site.