In the past year or so, Mike Judge’s “Idiocracy” and Sidney Lumet’s “Network” have often been cited as cinematic prophecies for the rise of Donald Trump. It’s not hard to see why, and “Network” was so prescient about things in our current media landscape that the film’s warnings almost seem quaint by today’s standards. But, there is one film yet to be brought up in the conversation of films that accurately predicted the future: Co-writer/director Jim Sharman and co-writer Richard O’Brien’s “Shock Treatment,” the less successful follow-up to the biggest cult film of all time, “The Rocky Horror Picture Show.” When “Shock Treatment” had its 25th Anniversary DVD release ten years ago, many noticed that it correctly predicted the culture of narcissism, ‘80s materialism, reality television, people who were famous for being famous, the rise of celebrity doctors and the mainstreaming of mental health. Ten years later, all of those things have become the norm in our culture and almost aren't worth commenting on anymore. But now we're in the era of Trump's presidential candidacy and 35 years after its release, "Shock Treatment" has another eerie layer to it.

The entire film takes place in an enclosed TV studio where several shows are broadcast under the umbrella of “Denton TV,” named after a fictional town in Ohio. It's ruled by Farley Flavors (Cliff DeYoung), a fast-food tycoon who has made himself a brand name in the American culture and who has now taken over the airwaves with insipid game shows and soap operas. The film’s heroes are, once again, the hopelessly banal, goody-two-shoes Brad Majors (also DeYoung) and Janet Weiss (Jessica Harper), the only carry-over characters from “Rocky Horror.” They become the unwitting contestants on a long-term game show designed to save their marriage.

While Brad sits estranged in a straightjacket for much of the film, Janet and her racist parents becomes the stars of a reality TV show called “Dentonvale.” The studio audience watches all of these shows and reacts accordingly to their twists and turns. When Janet’s father, Harry (Manning Redwood), finds out a friend of his was caught in a homosexual tryst with Mexicans, he storms out upset. Janet’s mother (Darlene Johnson) then says, “Your father hates Mexicans,” to which the studio audience responds with an enthusiastic “YEE-HAAA!” This leads into a satirical musical number in which Harry talks about everything a man should be, with lyrics like “And men should be the misters / And the masters of their sisters” and “Men should know the right occasions / To indulge in tax evasions.” 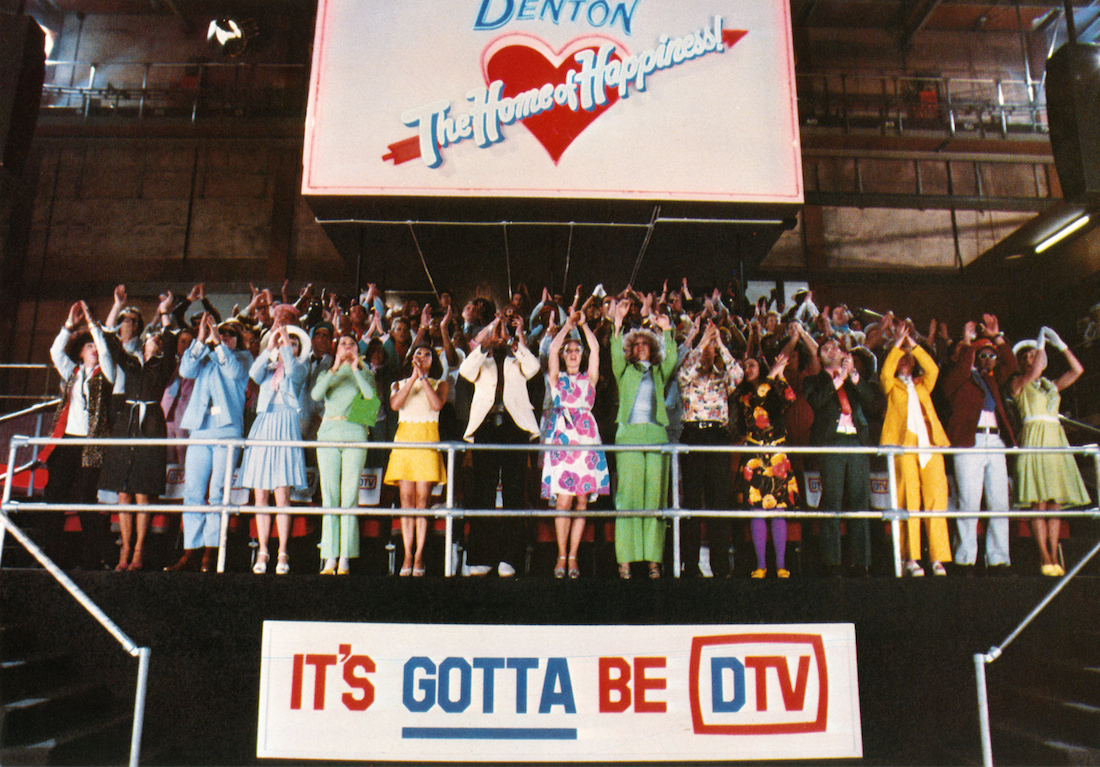 Back to Farley, though. As the new leading sponsor of Denton TV, he spends much of the film in his office observing everything on multiple TV screens and reacting with glee every time something bad happens to anyone who is not a devout follower of his (mainly Brad). Farley's main goal is to seduce Janet away from Brad by promising her worldwide stardom. He sings about “taking on the entire human race” and dreaming of the day when “the sun in the sky is a spotlight just for me.” Later, as Janet shuns her drab exterior and becomes an amalgam of every Miss America in a Little Black Dress, she sings the ultimate song of narcissism, “Me of Me.” The bigger her ego gets in the course of the song (the more she sings “me, me, me …”), the more aroused Farley becomes.

Not all of Denton TV’s shows remain on the air. One particular show, “The Denton Dossier,” is a talk show in which host Betty Hapschatt (Ruby Wax) interviews Denton’s leading social scientist, Judge Oliver Wright (Charles Gray). The judge criticizes the overly cheerful opening anthem (“Denton U.S.A”) as just another manipulative tactic to lure in the feeble-minded. Soon after this thinly veiled critique, the show is cancelled. The airwaves are no place to offer alternative viewpoints that fly in the face of the head sponsor. It’s not unlike banning members of the press from attending a rally because they once wrote something unfavorable about the candidate. One can’t help but notice that the Farley Flavors Fast Food commercial that airs afterwards has the brand logo—five F’s in a circle, eerily resembling another fascist symbol.

Farley is nothing without his Denton TV studio audience, who behave not unlike the “Rocky Horror” crowd at the midnight showings. They arrive pre-programmed to dance or shout phrases on cue, no matter how profane. Toward the end of the film when Farley comes out and addresses the studio audience directly, he is interrupted by Brad, who is basically protesting him in front of his people. Farley responds by having security throw him out as the audience chants in unison, “OUT! OUT! OUT!” Soon thereafter, Farley has his minions hand out baseball caps with his name on them to all his followers, as well as black-and-white striped straightjackets. By the end of the film, Brad and Janet have escaped the clutches of Farley’s TV studio while Farley himself exists at the center of a maze of rubber rooms, surrounded by his supporters, all with their arms bound and baseball caps on, ready to take on the entire human race.

"Shock Treatment," in 1981, satirized the coming of Reagan's America—a wholesome, enclosed wonderland that condescendingly proclaimed "a tolerance for the ethnic races" in its theme song. But unlike Howard Beale in “Network” or even Larry ‘Lonesome’ Rhodes in Elia Kazan’s “A Face in the Crowd,” the character of Farley is meant to be just a villain in the story and nothing more. The parallels to Trump are accidental, of course, but that is what makes all of these films fascinating to revisit today. While Beale represents Trump’s ability to go off script and attract followers who worship him for being an anti-establishment figure, and Rhodes represents Trump’s inability to maintain his mystique as everything in his past comes under scrutiny, Farley represents Trump’s showmanship and ability to dupe millions into buying into his all of his brands, whether it be fast food, a reality TV show or “the illusion of a happy ending.” Like Trump, he never learns a lesson, but will likely be no worse for wear once his TV show fades to black.