Aditya Chopra’s “Dilwale Dulhania Le Jayenge” is one of the world’s favorite films. Released in 1995, the romantic melodrama is still in its original theatrical run and this week reaches a remarkable milestone: 1000 consecutive weeks screening in a single cinema, the Maratha Mandir in Mumbai. To say that "DDLJ," as it is commonly called, is the longest-running film in Indian history is to understate its astonishing achievement. It became the longest running-film in Indian history when it surpassed the five and half-year benchmark of the action classic “Sholay”. That was 14 years ago.

The film is a phenomenon. In the Maratha Mandir, it plays before audiences that know every scene and can sing every lyric. "DDLJ"’s famous tagline is “Come… fall in love” and those audiences come back again and again to fall in love with the charming joker Raj (Shahrukh Khan) and sensible, beautiful, spirited Simran (Kajol) as completely as the couple fall in love with each other.

Raj and Simran’s is the love story of a generation. There has been no equivalent couple in Western movies in the period since "DDLJ"’s release. They are among the immortal screen couples. Watching "DDLJ" I feel the same desperate desire for the lovers to be united that I feel watching “Casablanca”, “When Harry Met Sally” or “Brief Encounter.”

Simran and Raj both grew up in London. Raj, a wealthy playboy, has just goofed his way through several wasted years at university, and Simran, an obedient daughter, has just been told it is time for her to return to India and marry the man she has been betrothed to since childhood, but whom she has never met.

They each leave for a month’s vacation in Europe with friends. They meet on a train, and again throughout their trips. Raj hits on her, annoys her, embarrasses her. They bicker in the furious way only star-crossed lovers in a classic rom-com can. At the end of the holiday they are in love, but Simran is taken to India by her unforgiving father (Amrish Puri) and told to forget her dreams by her downtrodden mother (Farida Jalal), who knows the futility of challenging his will.

Much of the film’s unprecedented appeal lies in the chemistry between Khan and Kajol. At times, Khan is Tom Cruise, at others he’s Cary Grant, and in between he’s Jerry Lewis. His is a huge, hilarious, overpowering performance and it made him a megastar. Kajol’s performance, though more restrained, is equally intoxicating.

When we first see Simran she dances, naked except for a towel, in a routine that is essentially a PG-13 striptease. It’s both innocent and seductive, and within minutes we have no doubt she is a woman for whom a suitor would cross continents in the hope of proving "DDLJ"’s title, which translates as “The Brave Heart Will Take the Bride”. 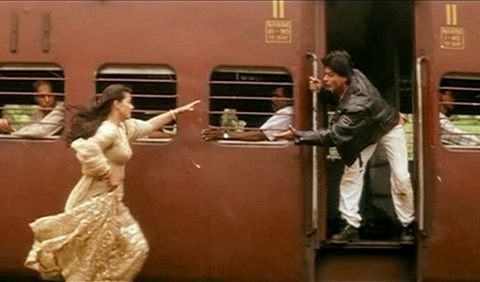 Having flown to India, Raj follows Simran’s fiancé as he goes hunting in the forest and catches him in a snare, just so he can rescue his rival and win entry into his inner circle. Later, when Simran observes the female-only fast Karva Chauth, Raj starves himself in sympathy. These scenes play like parts of an ancient myth. The musical numbers, as Bollywood musical numbers generally do, play like something by Busby Berkeley. The infamous fist fight plays like a sequence from a bad kung-fu film. And the whole movie plays like a soap opera. But, though critics seldom admit it, there is nothing as entertaining as a masterful soap opera.

"DDLJ" has such widespread popularity because it manages to convey two entirely opposing messages. It argues that we should follow our hearts and chase happiness wherever it leads, regardless of the obstacles in our paths, while simultaneously suggesting we should respect the ways of our elders, particularly our parents, and do nothing that challenges their will. Progressive-minded viewers seize the first message, traditionalist viewers seize the second, and both are so thoroughly enchanted by the soundtrack and the scenery and the emotion they don’t question the contradiction.

Nothing I have written about "DDLJ" will be news to anyone in India. But in the West, where Bollywood films are often indefensibly ignored, there may be many readers to whom it is all news. It angers me to think of critics who don’t write about Bollywood and it saddens me to think of moviegoers who never experience its joys.

In India, many will take "DDLJ"’s 1000-week anniversary as an opportunity to watch it for the tenth or the hundredth or perhaps even—fittingly—the thousandth time. In the West, those who have not seen the film will find no better occasion to watch it for the first. “Dilwale Dulhania Le Jayenge” sends an irresistible message to film fans who have yet to embrace Bollywood: “Come… fall in love”.