As this goes up, I imagine that your delivery-in-time-for-Christmas options might be exhausted. But this column is a year-round paean to general consumerism, not just gift-giving. Think of these as gifts for yourself, if need be. Here are five titles in release now. Starting this week, we'll be posting reviews of a selection of new Blu-rays every week. 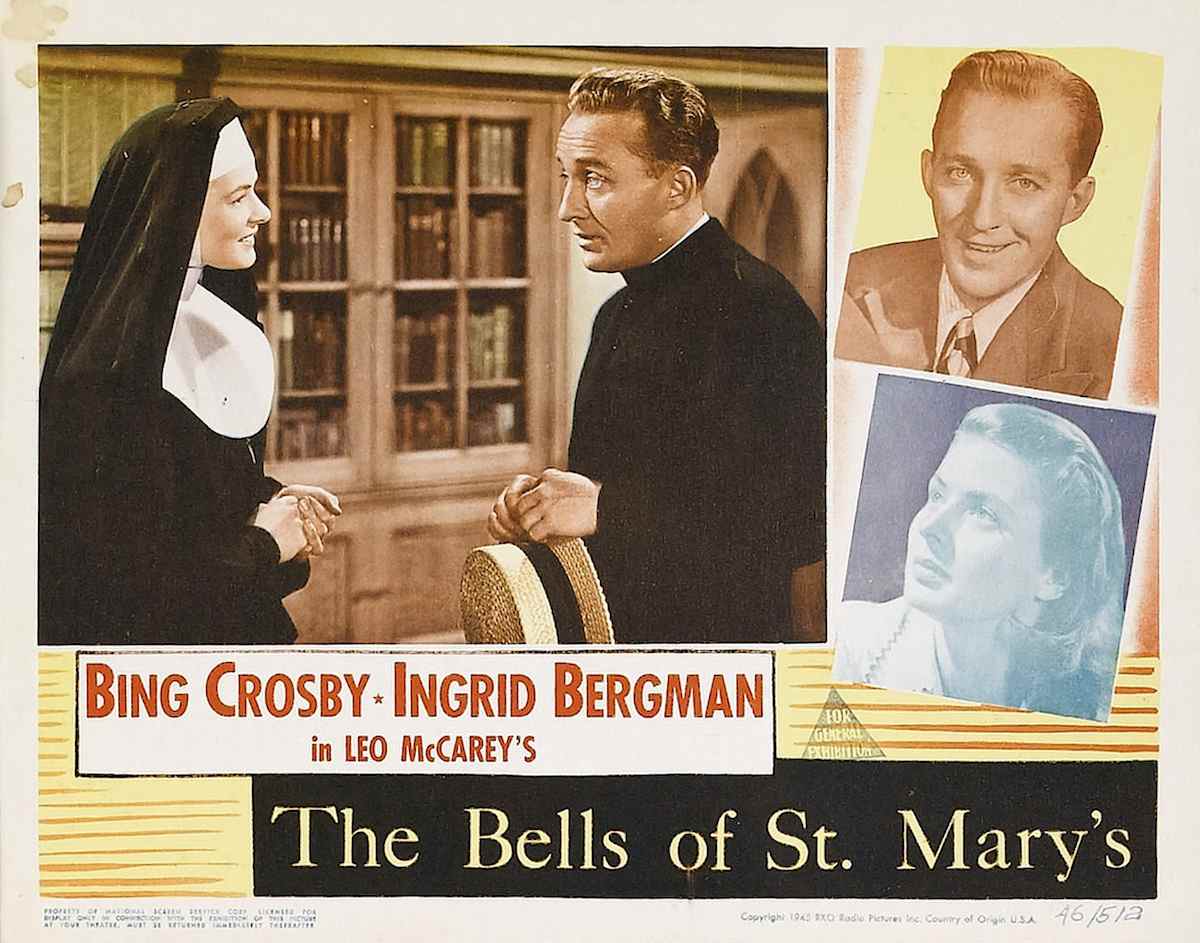 This 1945 movie pairing Bing Crosby and Ingrid Bergman for the first and last time and obliging them to play out a purely subtextual romance as priest and nun was not just a box office hit; for all intents and purposes it arguably WAS American popular cinema for that year, the year before, and the year after. For that reason alone a Blu-ray is desirable if not necessary. Then there's Robin Wood's perspective on it, articulated thusly in his "Sexual Politics and Narrative Film: Hollywood and Beyond": "Far from being the piece of sentimental kitsch it's usually represented as—sneered at by intellectuals, watched annually by millions as a wholesome 'family' Christmas entertainment, the two views equally misguided and perfectly complementary—"The Bells of St. Mary's"occupies a privileged position in the [director Leo] McCarey oeuvre as the one film that moves beyond the implicit rejection of the traditional patriarchal family to suggest (tentatively, sketchily) the possibility of an alternative model." So there. But it is indeed also catnip for lovers of the lead actors and McCarey's gentle humanism. Is this Olive disc a little soft-looking? A lot of the time, yes? Does the movie deserve better? Absolutely. But not even grading on the curve, I'd have to deem this disc a slight disappointment, but hardly a disaster.—B+

"A Hanging for Django" (Raro)

You know, not EVERY obscure spaghetti Western is a lost classic. Some of them are obscure for a pretty good reason. And this is one of them. Sweaty faces, faded denim, cockfighting, pretty undermotivated sepia sequences; Una lunga fila di croci (translates as "A long row of crosses"; no, I don't really know what it's got to do with any "Django" either), chronicling the adventures of two hired killers whose conflicting methods will lead to an inevitable please don't make me write the end of this description, doesn't do much to distinguish itself. The action scenes are largely not terrible and the ending is kind of interesting; the English dubbed soundtrack is a rank cheesefest: "This here army could use a couple men like Johnny Brandon." This 1969 picture looks okay in a gritty kind of manner, so my complaint isn't a quality one (although the supplemental doc on the movie, in which a critic sitting in front of some drawn blinds talks about the movie for a few minutes, is kind of, well, parsimonious as extras go); let's just say this disc neatly exemplifies the difference between cult object and addict's fix, maybe.—C

"My Name is Nobody" (RLJ Entertainment/Image)

And here we have a not-all-that-obscure Spaghetti Western that actually IS a lot of fun. Conceived by executive producer and partial director Sergio Leone as a send-up of both himself and the genre in which he made his name, the 1973 picture is both light-hearted and action packed, and Terence Hill and Henry Fonda play off each other nicely. The movie also features one of Ennis Morrison's quirkiest, catchiest scores. This Blu-ray is not the height of Leone in high-definition, but it's solid, enjoyable to watch.—B+

No less an authority on the milk of human kindness than movie blogger Jeffrey Wells has protested that this 1975 Robert Altman magnum opus no longer should be seen as such, because it is, get this, "snide and misanthropic." Sure thing, Dr.Schweitzer. I myself found it rather staggeringly pertinent in the new Criterion version. It's a lot more interesting and complex with some 40 years separating it from the constrictions of its contemporary context. As for the Blu-ray, it offers a beautiful image and a magnificent rendering of the complex soundtrack. And the accompanying making-of/retrospective documentary is one of the best things you'll ever watch about both the movie and Altman.—A+ 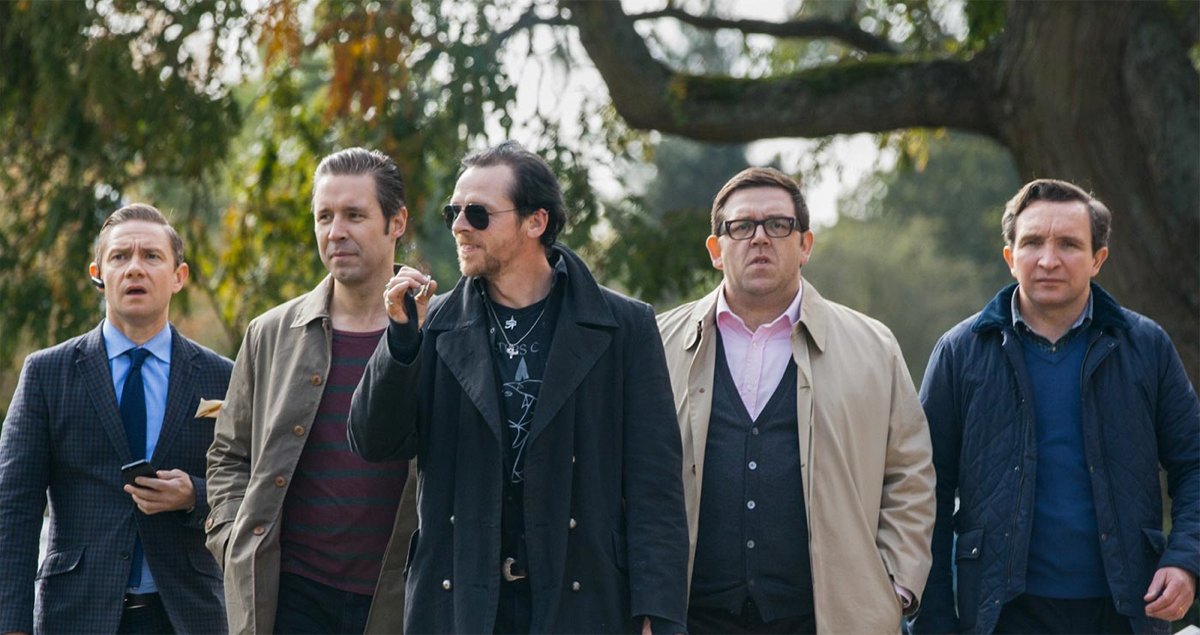 One of my ten best movies of 2013 is, among other things, a truly wondrous feat of writing/directorial conception and construction. Its co-writers, lead actor Simon Pegg and director Edgar Wright, are, like almost everyone else involved in the movie, I reckon, pretty invested in this ethos, which stems directly from a particular kind of movie love. The kind of movie love that also loves DVD extras. So. This Blu-ray disc boasts, among other supps, THREE discrete commentaries! Is this de trop, or aptly geekerific? Given the level of detail and the fact that the actual detailing of the movie supports a detailed discussion, I'd say…apt. More than apt, really; kind of delightful in its generosity. And the wonderful movie itself looks and sounds great too.—A+